Zoom is still booming in the coronavirus era, even as more headlines raising concerns about the platform’s privacy issues continue to crop up.

Other video communication apps grew meaningfully over April as well, although over a smaller unique mobile user base, according to Sensor Tower. Houseparty received 7.2 million U.S. downloads across Google Play and the App Store, while the figure was 6.6 million for Google Meet.

Major League Soccer Is Wrong About the Value of Its Rights

What jumps out most from Sensor Tower’s latest numbers is the suggestion of Zoom’s resilience: Zoom was able to top its huge month-of-March app download tally (11.2 million) in April, which is a month where headlines raising concerns about privacy issues continued to crop up.

Red flags being raised around Zoom haven’t come to an end yet either: Earlier this week, Bloomberg reported that hackers put over 500,000 login credentials for Zoom on sale on the dark web. And last Tuesday, ABC News reported on a federal intelligence analysis claiming Zoom could be vulnerable to intrusions by foreign government spy services (Zoom vehemently disagreed with the claim).

Although the Cambridge Analytica scandal was clearly more serious than Zoom’s privacy headaches to date, how Facebook grew after the scandal, and how Zoom is growing now, is a reminder that consumers don’t always act on privacy concerns levied by industry watchdogs as much as you might think they would.

This echoes results from a 2019 survey by Cisco, which found that the majority of respondents (84%) said they care about data privacy, but only 38% of those who said they cared had acted on their data policy/sharing concerns.

And this apparent ambivalence may stem from a sense of futility that sweeps over some consumers when they think about trying to keep their data private. In a June 2019 survey by Pew Research Center, the majority of U.S. adults (62%) believed it was not possible to go through daily life without companies or the government collecting data about them. 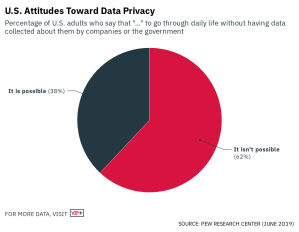 If anything, this suggests how big tech, which is familiar with being marred for data privacy issues, still has the chance to cultivate more meaningful video communication app user bases, even as consumers claim they remain concerned over the handling of their data.

This helps explain why Google last week announced that it was making Google Meet free for everyone, and why Facebook recently launched its Zoom-competitor Messenger Rooms.