‘Top Chef’ Finale: How to Order Judges’ Table-Worthy Dinners and Desserts by Past Winners and Contestants

“Top Chef: Portland” has picked its finalists. No spoilers, but the final twist will no doubt leave audiences pining to try the cheftestant’s remaining dishes. But until some genius/messiah perfects the instant food replicator from “Star Trek,” foodie fans of the series have to settle for eating with their eyes only. Or do they?

While you won’t be able to taste the menus that the top chefs prepare to try to take the title on July 1, your finale viewing experience doesn’t have to be all salivating and no satisfaction. Why not spice up your life and order a meal (or dessert) made or created by a former “Top Chef” winners like Stephanie Izard or Kristen Kish, a past contender like Gregory Gourdet, or a current member of the judging panel like Richard Blais?

We’ve come up with three ways to commandeer four-star fare to enjoy while watching the epicurean end. Which TV dinner you choose depends on how much time you want to spend in your own last chance kitchen and what degree of difficulty you’re comfortable with, but remember that even the most hands-off option requires a little planning and time for shipping.

If you prefer feasting to frying or flambéing, please pack your knives and go online because ordering “Top Chef” eats from a meal delivery service is the easiest option. Both Freshly and Territory have partnered with former contestants to curate gourmet entrees that are delivered fresh, not frozen and require a few minutes in the microwave.

Territory launched its celebrity chef program in February and the current responsibly sourced nutrient-dense gluten- and dairy-free dishes will be available through the first week in July. If you live in San Francisco, Los Angeles, Texas, DC, or New York City, you can partake in season 16’s Eric Adjepong’s bunless beef or vegetarian black bean burgers with yassa onion jam, Colorado’s third place chef Joe Sasto’s quinoa bowl with citrus hibiscus pork, or season 6 fan favorite and “Top Chef: All Stars” runner-up Kevin Gillespie’s country captain chicken with pickled green tomatoes and turmeric rice. Gillespie’s offering, which is also available to order in some southeastern markets and as a vegetarian entrée with portobello mushrooms, might seem familiar as it was the theme of his Restaurant Wars eatery.

Meals start at $10.99 each, can be ordered with all meal-plan sizes (six to 18 meals a week), are left on doorsteps Wednesdays and Sundays, and require no prep. The service, which normally partners with local chefs and restaurants, is currently available in 20 major markets with a goal of being available nationwide by the end of the year. Check out the meal deals here. 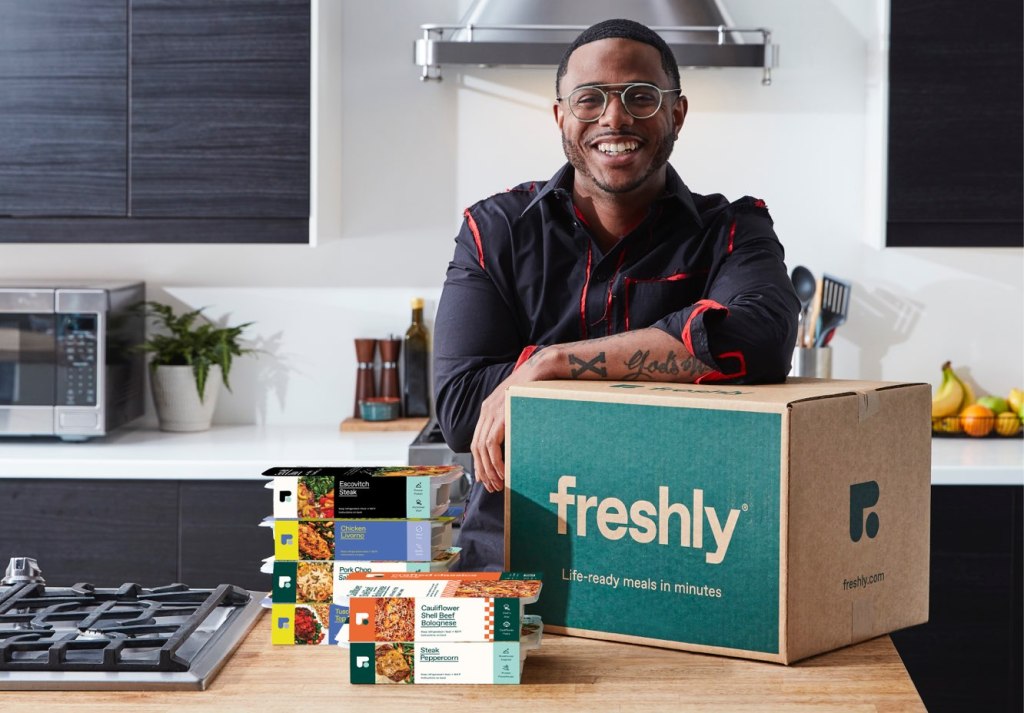 Freshly, another meal delivery service hawking gluten-free, single serve portions with minimal processed ingredients or sugar, launched its Chef’s Special by Freshly program in March and each guest chef’s creation is part of the rotating weekly menu for a 10-week period.

This month’s selection—a Jamaican-rooted escovitch steak with jerk broccoli, peppers and coconut rice—sprung from the masterful mind of Kwame Onwuachi, a contender on season 13 and a recurring judge in Portland, and will be available until mid-August. The company’s chef-lebrity meals also come fresh and fully prepared and only require a three-minute zap in the microwave. Whether you select four or 12 meals per week, you can add the Chef’s Special for an upcharge of $1.49. You can order multiples in order for the whole family to have the same meal. You can also try the service once for this special occasion week and if you want to quit after that, you can very easily. But you might not want to. After Onwuachi’s meal runs its course, lauded chef Sean Brock, who appeared on the Seattle season, (quick) fires up oven-roasted pork chop and season 10 winner Kristen Kish brings the sliced beef brisket to subscribers from October to January. Order your Top Chef prepared meal here.

Online platform Goldbelly connects consumers to their cravings. You want your favorite Philly cheesesteak but are currently working in LA? Always wanted to try the hot chicken sandwich that started it all in Nashville but still feeling iffy on plane travel? Done. It also offers several meal kits, delicious nibbles, and dessert courses from some of the show’s finest.

Using Goldbelly as a middle man means you mostly get to put your hands (and feet) up and utensils down. Depending on what you feel like noshing on at your viewing party, you might only need to thaw or reheat items like with the many sweet treats from Sugergoat, the Chicago pastry palace dreamt up by first female title taker Stephanie Izard, including the chocolate French fry pie or the tie dye surprise cake.

But you might also be called upon to preheat the oven, steam buns, roll Carla Hall’s hot chicken in the spicy oil or honey, or boil water for “Top Chef” all-star and James Beard Award winner Karen Akunowicz’s made-from-scratch pastas and sauces. Orders come with explicit serving and storage directions.

Season 14 runner-up Shirley Chung even includes a hack on how to turn scraps from her tea-smoked whole duck into a second bonus soup. If you’re still feeling intimidated, some of the culinary superstars like “Top Chef Masters” winner Marcus Samuelsson occasionally offer a live cooking class and meal kit combo. And if you expand your parameters to include guest judges, you can sink your teeth into David Chang’s Bo Ssäm (a Momofuku menu mainstay)or Nancy Silverton’s famous oven-baked meatballs and garlic knots for four. (Or for one as the best part about takeout is there are no prying eyes to shame you for overindulging.)

Of course, this is the method that requires the most planning and forethought as all of the chefs have different shipping schedules and timeframes. How long it takes to get to you depends on where you live compared to where the food is coming from. A good rule of thumb is to allow 10 days between purchase and your palette.

If you can take the heat, get in the kitchen and do your best impression of a cheftestant during an elimination challenge with help from their cookbooks and products.

Most of the chefs worth their kosher salt have put together a cookbook or two. (So have Padma Lakshmi, Tom Colicchio, and Gail Simmons for that matter, which is probably what inspired the recent recipe development challenge.) The newest, “Everyone’s Table: Global Recipes for Modern Health,” is from the always affable and humble yet super talented Gregory Gourdet. The season 12 runner-up, season 17 all-star, and smiley fixture of the Portland judging panel has authored a packed collection of globetrotting flavor bombs free of gluten, dairy, soy, legumes, and grains that is worth the investment for the breakfast chapter alone. Vegetarians will be thrilled as there are sections on both raw or cold plants and cooked or hot veggies.

Other Portland cast members with cookbooks include Dale Talde (“Asian-American: Proudly Inauthentic Recipes from the Philippines to Brooklyn”), Kristen Kish (“Kristen Kish Cooking: Recipes and Techniques”), and Richard Blais (“So Good: 100 Recipes from My Kitchen To Yours”).

If you’ve been a good little foodie and stayed home during the pandemic, you’re probably more than ready for a tasty trip to eat your way around the world. In lieu of leaving on a jet plane this instant, why not whip up some exciting dishes with help from Izard’s line of This Little Goat Went To… sauces and seasonings. Inspired by her own travels and developed for use in her restaurants (Girl & Goat, Little Goat, Duck Duck Goat, and Cabra) the line has expressions that evoke Hong Kong, India, Southeast Asia, Korea, Yucatan, Tokyo, Cuba, Belize, and Morocco through the use of spicy chiles, smoky paprika, citrus, fish sauce, soybean paste, and ginger. Her website offers lots of mouthwatering ways to use the products.

Gillespie is known for his meat-heavy menus and his “Pure Pork Awesomeness.” He has jarred a few of his secrets including Gunpowder Finishing Salt, Pig Swim pork brine, and American Muscle Meat Seasoning selling them to home cooks through his Red Beard Restaurants empire and Instacart.

Gillespie is known for his meat-heavy menus and his “Pure Pork Awesomeness.” He has jarred a few of his secrets including Gunpowder Finishing Salt, Pig Swim pork brine, and American Muscle Meat Seasoning selling them to home cooks through his Red Beard Restaurants empire and Instacart.

And if all else fails, you can always grab several blocks of Tillamook cheese and prepare it five ways. Just maybe don’t pair it with fish.