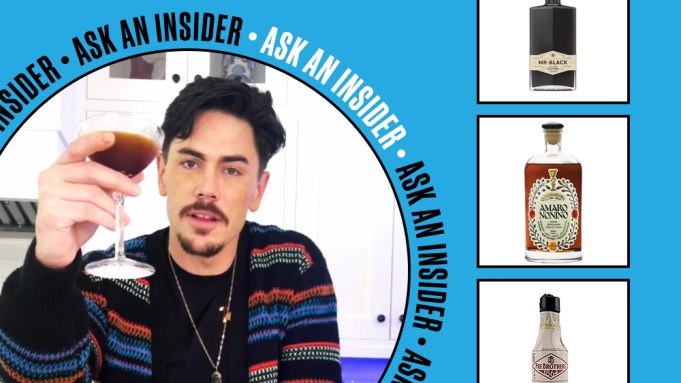 From sound engineers and screenwriters to celebrity makeup artists and stylists, Variety’s new series “Ask an Insider,” will ask top professionals within the entertainment industry to share their must-have essentials, for work… and for play. In this installment, “Vanderpump Rules” star (and reality TV’s cocktail connoisseur) Tom Sandoval explains the “it factor” of the espresso martini, in addition to his his own signature recipe for the caffeinated cocktail.

Considering the origins of the espresso martini, the cocktails’ popularity on reality T.V. makes…a lot of sense.

As the lore goes, London’s “grandfather of cocktails” Dick Brasdell was working at Fred’s Club in the 1980s when a model walked up to the bar and asked for “a drink that will wake me up and then mess me up.” 40 years later and it’s safe to say that some of the most popular espresso martini drinkers on television have carried this mission statement through to the 21st century.

Think about Kate Chastain on Bravo’s “Below Deck,” who’s said that she tries an espresso martini in every country she visits. Or the Hamptons-based reality show “Summer House,” credited so much with re-popularizing the drink that two cast members Kyle Cook and Amanda Batsula founded their own canned espresso martini company Loverboy earlier this year.

But when it comes to a dual love for both coffee and alcohol, no one does it quite like Tom Sandoval of “Vanderpump Rules.”

“I always get an espresso martini to start off the night, it’s just a nice energy boost to get the night started,” Sandoval tells Variety.  “It’s a more sophisticated alternative to a vodka Redbull, so much more savory and delicious. And you get that boost.”

In fact, Sandoval’s morning coffee is so important to him that a custom-made credenza, fitted with a Nespresso, Keurig and milk frother, sits mere feet from the reality star’s bed so he can make his signature Dumplin’ Latte as soon as he wakes up — a daily ritual seen in the show’s Season 9 premiere.

But anyone familiar with cocktail connoisseur Sandoval, and his best friend Tom Schwartz, co-founders of West Hollywood’s buzzy TomTom Bar, knows that no Tom-approved drink is really complete without a drop (or a few) of alcohol.

It makes sense, then, that one of TomTom’s most popular drinks is the Stroke of Midnight, an espresso martini made with vanilla vodka, Kahlua and espresso. But lately, Sandoval has taken on a more unique twist with his martini recipes, opting for whiskey over vodka for a warmer kick come winter. Sandoval shared his signature Espresso Martini recipe with Variety, made with his and Schwartz’s brand new Tom’s Good Lovin’ Rye, released this month — so you, too, can make a drink that will “wake you up and then mess you up.”

Follow the full recipe in the above video with Sandoval himself!

Amaro Nonino, on the other hand, gives the mix a necessary bitter kick. This Italian liqueur is bittersweet, with hints of caramel, vanilla and allspice, the perfect pairing with Sandoval’s whiskey. “You gotta get the nice balance of sweet and bitter and savory,” Sandoval says. Plus, flavored with herbs from the mountain of Friuli, he says this liqueur blends particularly well with whiskey, serving as a palatable connector between the port and espresso.

Sandoval says that measuring is the difference between a mediocre and great espresso martini, which is why he goes for this bittersweet liqueur to add a sweet taste that isn’t too overwhelming. He uses Mario’s Hard Espresso, a blend of roasted Italian espresso, organic Madagascar vanilla and cane sugar.

For bitters, Sandoval says that you want to go with a “rich and nutty blend with earthly aromatics and baking spices to add complexity.” His brand of choice is Fee Brothers, which he says has a sweet and roasted flavor so intense that a couple drops does the trick.

While personal touches are always encouraged, Sandoval does have two ground rules for shaking the perfect drink: 1. use real espresso or cold brew, and 2. make sure you give it enough time to cool down before mixing it in.

“I swear I’ve seen people dump Kahlua and vodka and simple syrup and just make it,” Sandoval says. “And yes, if people are a couple drinks deep you can kind of fool them but it’s important to get that coffee and espresso in there.”

But brewing the espresso ahead of time is the key to avoiding dilution. Heat and acidity can break down the ice too fast, he warns, so giving it time to cool off ensures the drink doesn’t come out too weak. While he opts for Nespresso pods for fresh espresso, Stumptown is his cold brew of choice for an extra kick.

“I  always use a Boston style shaker instead of a French style as there’s more space and less chance of leaking,” Sandoval says. Made out of gleaming stainless steel, this Crafthouse one from Saks features a mouth wide enough to shake for at least two glasses. You can also go with this Boston shaker for a more affordable option.

Martini glasses have a tendency to spill easily, which is why Sandoval tends to go for stemless glasses. “Cosmo glasses have a heavy bottom to it that makes it easy to hold and carry around, but also is a nice shape and size for a martini,” he says. He notes that a classic rocks glass and more stylish coupe glasses are also bar cart essentials, though.