Expect to see a lot of green tracksuits and white Vans this Halloween.

Costumes inspired by the hit Netflix series “Squid Game,” primed to be the streamer’s most popular series to date, are trending online. Not only did green-and-white tracksuits become an instant best-seller shortly after the series premiere, but white slip-on Vans saw a 7,800% spike in sales since the show hit Netflix, according to data provided by Sole Supplier. White slip-ons, more broadly, have also seen a 97% uptick in search volume, according to Lyst. 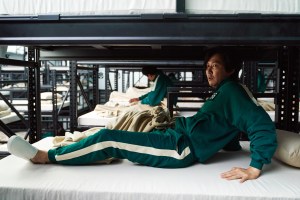 Clearly, fans are looking to recreate the matching uniforms worn by the players in the Korean thriller. The nine-episode series follows a group of debt-ridden citizens who compete in a “Hunger-Games”-like competition for the chance to win an abundant cash prize. After being put to sleep in a van, the 456 contestants find themselves in a nondescript auditorium the next morning, all wearing the same sweatsuit and white slip-on sneakers.

Some fans are choosing to go as the more villainous characters in the show, though, opting for red jumpsuits and fencing masks to transform themselves into the mysterious masked guards. Searches for red boiler suits spiked by 62% in recent weeks. Others, however, may want to don an orange dress, yellow tee and knee-high socks to become the murderous Red Light, Green Light doll seen in the first episode.

Whichever costume you choose, you have plenty of options: Check out our complete guide on how to achieve the perfect “Squid Game” Halloween look.  But if you decide to be a money-hungry contestant this year, you’ll want to snag these white sneaks before they sell out.