The Best Marvel Board Games to Immerse Yourself in the MCU

If you leave “Black Widow” this weekend wanting nothing more than to be as powerful and cunning as the master assassin Natasha Romanoff then you’ll need an outlet to embody her stealthy ways.

Thankfully, Marvel doesn’t make it hard to hang out with, and even transform yourself into, your favorite MCU superheroes. Marvel fans can find a place to hang out with their favorite heroes in basically every format. And if you’re used to seeing Marvel’s captivating storylines play out from behind the screen, it can be refreshing to actually take part in the action yourself, which is why Marvel board games are so entertaining.

Whether you’re defeating infamous villains as a secret S.H.I.E.L.D agent, joining the dark side as a Hydra spy or teaming up with other Marvel superheroes for an epic Avengers battle, there’s no shortage of action-packed gameplay in these immersive board games. Here are the best ones to buy right now. And if you’re in the market for more Marvel accessories and games, check out our comprehensive round-up here.

This addicting mental strategy game follows the same basic rules as the original, splitting up players into two teams led by Cluemasters, who use one-word hints to guide their respective teammates to the right cards. The Marvel Edition’s two teams are none other than S.H.I.E.L.D and Hydra who claim ownership over their own superheroes, such as Spider Man, Guardians of the Galaxy, The Avengers and Doctor Strange.

This one’s for you if you take card and board games seriously and don’t care how long it takes for a victory. The deck-building game has each player take on the role of one of five villains: Thanos, Hela, Ultron, Taskmaster or Killmonger to face off against one of the dozens of Marvel heroes to be picked from a stacked Fate deck. The game if far from simple — in the best way possible. Thankfully, each set comes with a high-quality step-by-step rule book so you play exactly as intended.

Forget Monopoly money and hotels. Real monetary value comes in the form of the Infinity Gauntlet and Stark Industries — at least in the Marvel Edition of everyone’s favorite family game. The set comes with 28 Marvel heroes to play as, with an impending battle that comes to a head once someone lands on a Child of Thanos.

Join the dark side – at least for a couple of hours — with “Sinister Six,” in which players participate in four heists and a final battle against the one and only, Spiderman. Pick from Miles Morales’s sinister nemeses, such as Green Goblin, Venom and Lizard, using different cards to pull off crimes and avoid capture.

If you’d rather be on the right side of history, then join the S.H.I.E.L.D team in this immersive board game that will see you transform into a hero by taking back the Cosmic Cube from evil Red Skull before New York City 3 is destroyed. Of course, the most important part of your mission is defeating Hydra’s secret agents, using Social Deduction powers to determine who is lying before the city is destroyed.

No game is the same with Marvel Champions, which sees players defeat infamous villains and embody their favorite superheroes by simple deck-building and Hero Packs. The best part of Marvel Champions is that it features escalating scenarios that fit each player’s skill level. Plus, it’s a Living Card Game with ongoing product releases that offer new ways to play for years to come.

In the four-person card game, players take on the role of a Marvel hero of their choosing to stop the master plan of a powerful villain. The cards dictate each game’s action-packed storylines, posing different scenarios, powers and threats that can foil any thoughtful strategy. Pick wisely. 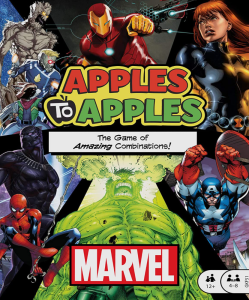 Apples to Apples is the best option if you want to boast your Marvel knowledge without duking it out on a tabletop battlefield. The rules are the same as the classic game, but this time with Green Apple Cards that feature phrases like “Black Widow,” “Web-shooters” and “Hulk’s Pants.” You’ll need to play with friends who know their Marvel stories, though, because you can’t risk a judge rejecting a winning card because they aren’t familiar with the mystery behind Hulk’s torn purple pants or don’t know what Spider Man’s powerful web-shooters are really made of.

The latest expansion to the original critically-acclaimed “Marvel Deck Building Game,”  Dark City introduces new heroes such as Cable, Daredevil, Professor X and Blade to face off against deadly, all-new Masterminds like Apocalypse, Mr. Sinister, and Kingpin. The 350-card game comes with everyone’s favorite Marvel characters such as  X-Force, X-Men and the Marvel Knights divided into opposing groups. Plus, a new  “Unique Bystander” mechanic gives special rewards to players who rescue them.

The classic Munchkin card game is taken to a whole new superhuman level with its fusion with Marvel, giving players the ability to level up their powers in every round to defeat the most iconic villains of the MCU.