Tap Into Your ‘Harry Potter’ Nostalgia With This Whimsical Wizarding Merch

Feeling nostalgic after the “Harry Potter” reunion last week? You aren’t alone. The HBO special, which dropped last week in celebration of the franchise’s 20th anniversary, brought back some of the most beloved Hogwarts alumni, including Harry (Daniel Radcliffe), Hermione (Emma Watson) and Ron (Rupert Grint), who reminisced about their life-changing roles on screen.

The reunion served as a reminder of the lasting impact the book and subsequent films have had on popular culture over the past two decades, as the community of diehard Potterheads only continues to grow with time. Luckily, there’s no lack of Harry Potter merchandise that cater towards the biggest of fans, and they make for perfect gifts (for yourself or others) any time of the year.

From a cozy blanket to a music box to a golden snitch lamp to magically appearing maps, we’ve rounded up the best Harry Potter merchandise to tap into your nostalgia.

Channel Mrs. Weasley in the kitchen with this best-selling cookbook. It has 150 recipes ranging from meals to snacks to desserts that are all easy to make. Best of all, they’re straight from the books, including Harry’s favorite dessert, Treacle Tart; Kreacher’s French Onion Soup; Pumpkin Pasties from the Hogwarts Express cart; and Mrs. Weasley’s Molly’s Meat Pies.

Commence your day in whimsy with this magical nightstand clock that doubles as a golden snitch. Compact in size, powered by AA batteries and fitted with a glitzy gold exterior, it makes for a functional decor piece for any room.

This gorgeous special-edition Dutch oven is finished in Marseille blue with a a Golden Snitch knob and embossed with three Quidditch goal rings. Whimsical embellishments aside, the beloved Le Creuset piece boasts the same exceptional heat retention and distribution for which it’s famous. Featuring easy-to-clean porcelain enamel and a tight-fitting lid, the roomy dish is perfect for slow-cooking and braising to baking and frying.

One of the best pieces from Vera Bradley’s limited edition Harry Potter collection is this roomy travel bag, whose colorful pattern, which includes owls and magical castles, only nods subtly to Hogwarts imagery if one looks closely enough. The duffel is big enough to pack a week full of essentials, while a detachable strap makes it extra versatile. Plus, it’s made out of 100% recycled cotton.

Put your “Harry Potter” knowledge to the test with this themed version of Trivial Pursuit. There are 600 questions based on the movie. The first person to get 12 right is the winner! Made for ages eight and up, it’s great for the whole family to play! 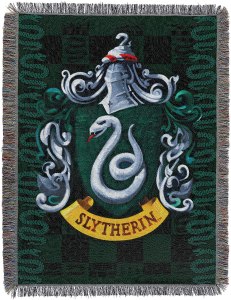 Even on the coldest winter nights, you’ll feel a lot warmer cuddled up in a Harry Potter woven tapestry blanket. Of course, we can understand if you’d rather hang it up as décor, since the decorative fringes around all the edges call for attention. There are nine designs to choose from, including one of each house — Gryffindor, Hufflepuff, Slytherin or Ravenclaw — as well as the Triwizard Tournament and Hogwarts. 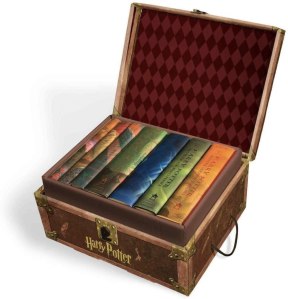 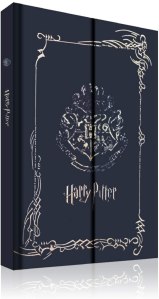 Though this vintage-inspired journal looks magical, you don’t have to worry about Tom Riddle taking over this diary. The striking hardcover notebook has a built-in small binder, making it incredibly versatile. It can be used for everything from a planner to a diary to a data keeper to writing down your favorite spells. 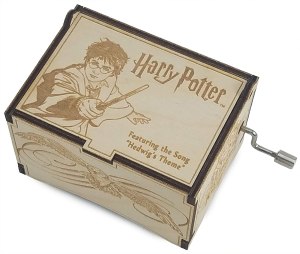 Make this music box even more special by opting to have a message engraved on the inside of the top piece. Made in the USA, the music box plays Hedwig’s iconic theme song when the handle is turned. The old-fashioned hand crank gives it extra vintage charm.

Add a little sparkle to your sips with this Spoontiques Hogwarts Glitter Cup. Show off your Hogwarts school spirit and be environmentally friendly with the 20-ounce cup that comes with a reusable plastic straw. The cup features a double wall insulation and a stainless steel twist off lid to keep your drink at just the right temperature and prevent spills. 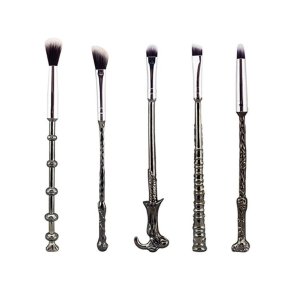 Talk about makeup magic! You’ll feel like you’re in Ollivanders Wand Shop in Diagon Alley every time you apply your makeup. Each of the five makeup brushes has a unique handle that resembles a wand. There’s a brush for every need, including base, blending, blush, eyeliner and powder. A storage pouch is included, making it great for on-the-go. The brush fibers are super soft and synthetic for easy application. 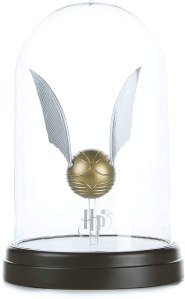 You’ll feel like you caught the golden snitch yourself to win the quidditch game when you put this lamp on display. Great for all ages, it’s ideal for lighting up any room, such as a bedroom or desk lamp in a home office. The golden snitch floats inside the tall illuminated bell jar. Simply tap the jar to turn on the USB-powered light.

Just like how Harry Potter knew how to make the map of Hogwarts magically appear, you can do the same — all you have to do is pour coffee or a hot beverage into the mug and it’ll magically transform from plain black into the Marauder’s Map. We suggest filling the 11 oz. heat-sensitive mug with lots of coffee if you want to be up all night on adventures like Harry. 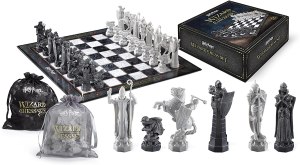 No, this wizard chess set won’t come to life to challenge you to a game, but it’s the closest you’ll get to the set in the movies. Officially authorized by Warner Brothers, it’s a miniature re-creation of the Wizard Chess Set in the “Harry Potter and the Sorcerer’s Stone” film, with all of the same intricate details. It comes with 32 chess pieces that measure two to four inches, a playing board and two drawstring pouches.

A Harry Potter fan without a wand is like, well, a wizard without a wand. This collectible one will make you feel like you’re ready to cast any spell, as it’s a replica of the wand and box props used in the “Harry Potter” film series. It even comes in the original Ollivanders wand box! Officially authorized by Warner Brothers, the exact 1:1 scale reproduction is 15 inches long.

Show your allegiance to the house of Gryffindor with this matching scarf and beanie. It’ll keep you warm and cozy, even if you’re watching a quidditch game in the stands on a cold day. Featuring a patch of the Gryffindor crest of a lion and the signature colors of scarlet and gold, this best-selling scarf symbolizes bravery, just like the house. If you’re a Hufflepuff, Slytherin or Ravenclaw, there are matching sets for those houses, too.

No matter how old you are, you never outgrow Legos — or “Harry Potter.” Put those two together and you get this delightful Lego set of the Hogwarts Astronomy Tower. It comes with a few figurines of favorite characters, including Hedwig, as well as accessories like wands and other magic-making pieces. Once it’s all built, you can bring your favorite scenes to life.

You’ll actually wish for rainy days so you can use this umbrella! Just like magic, it changes from black and white graphics to full color when wet. Officially licensed, it measures 36 inches deep and 21 inches tall when expanded, big enough to keep you dry in any downpour.