What do James Bond, Marty McFly and Batman have in common? If you guessed that they’re all heroes on the silver screen then you’re not wrong, but we were thinking of something more specific. They’re all known for their iconic timepieces, wearing some of the best movie watches of all time. That crucial accessory is never overlooked by the costume department, since everyone knows that the mark of a man with great swagger and style is his timepiece.

Some of the best movie watches have become nearly as famous as the characters who wore them. For example, according to Hollywood lore, Marlon Brando was asked not to wear his personal watch, a Rolex GMT Master 1675, on the set of “Apocalypse Now” because it would look too new and out of character for his portrayal of Colonel Kurtz, a special forces officer traversing the jungle during the Vietnam War. But as Brando was wont to do, he went his own way and wore it anyway, popping off the bezel for filming. The watch was believed to be lost until it came to auction last year, with its bezel still missing.

Though Brando’s watch is clearly one of a kind, there are plenty of timepieces out there that take inspiration from the best movie watches. These are the ones to shop, even if you don’t have a movie star budget.

Variety editorial products are independently selected. If you buy something through our links, PMC may earn an affiliate commission.

Yes, you can actually get the same exact watch Michael J. Fox wore in “Back to the Future.” What makes it even more amazing is Marty McFly’s retro calculator watch is easily available and will hardly set you back much money. In fact, it’s a lot easier to find this watch than a DeLorean, let alone one that doubles as a time machine. Nerds and vintage lovers alike will love its ’80s throwback vibes. $19.87, amazon.com

In “Glengarry Glen Ross,” Alec Baldwin’s character, Blake, sports a Rolex Daydate that’s completely gold, down to its face. If you don’t have a budget for a glittering Rolex (who does?), you can bring a touch of that sumptuousness with this timepiece that’s also all in gold, by Michael Kors. It shares a similar bold, more is more vibe. $160.61, amazon.com 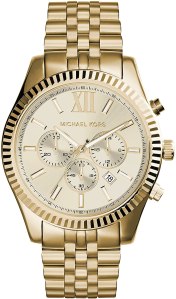 James Bond is known for sporting many of the best movie watches of all time. While his OG choice was a Rolex, he recently made the switch to Omega, and that even came up in conversation with Vesper Lynd in “Casino Royale,” Daniel Craig’s first run as the iconic spy. In “Skyfall,” Bond wears an Omega Seamaster Planet Ocean 600m 42mm. You can channel 007 with this model by Invicta, which also has a silver chain and black face. Just like the spy, it’s suitable for scuba diving, since it’s water resistant up to 660 feet. $84.71, amazon.com 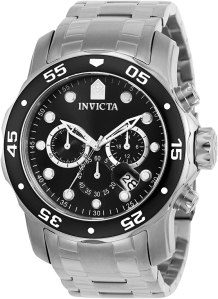 When you saw a pocket watch, you probably knew where this was going. The piece in Quentin Tarantino’s “Pulp Fiction” wins for most controversial movie watch ever. If you’ve seen the pic, you know what we’re saying. Interestingly, no one has ever been able to identify the exact watch in the movie. That air of mystery means this classic timepiece makes a great fill in. The quartz pocket watch comes with a detachable chain, but Christopher Walken’s famous monologue is not for sale. $9.99, amazon.com 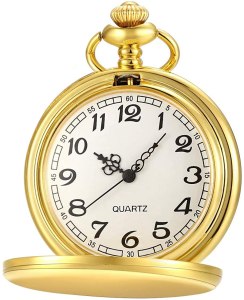 The watch that Ripley, played by Sigourney Weaver, wears in “Alien” is just as crucial to the character as her jumpsuit. It’s a Seiko Giugiaro 7A28-7000 that was made in partnership with famous automotive designer Giorgetto Giugiaro. At the time, it had a cutting edge aesthetic, a silvery gray band with a black face with yellow details. Though a few were made, it’s a tough one to find out there. This black and silver sporty watch by Casio is a worthy substitute, with subdials just like Ripley’s. $64.79, amazon.com

There are plenty of things no one wants to emulate from Bret Easton Ellis’s “American Psycho.” But despite his violent tendencies, to put it mildly, you can’t deny that the main character, Patrick Bateman, played by Christian Bale, has immaculate style. A key point of that is the Rolex Datejust he wears in the film, a classic watch worthy of 1980s New York City luxury. Copy his chrome and gold wrist candy with Burei’s automatic watch with the same elegant color scheme. $169.99, amazon.com 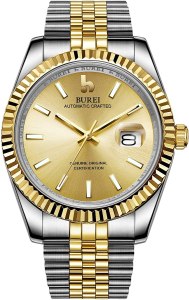 As one of the richest people in the world, Bruce Wayne, has to wear a watch worthy of his status and his choice certainly didn’t disappoint. In Christopher Nolan’s Dark Knight Trilogy, particularly “Batman Begins” and “The Dark Knight,” he sports the Jaeger-Lecoultre Reverso Grande Taille. The upscale, elegant brand also provided the watch worn by Val Kilmer in “Batman Forever.” To show that you don’t have to live in Gotham to get your hands on one, Jaeger-Lecoultre released special editions of a couple of their watches pegged to the films. For those of us who don’t have a Bruce Wayne-esque bank account, Timex shares the aesthetic of an exotic leather band with this crocodile patterned genuine leather strap. $39.95, amazon.com 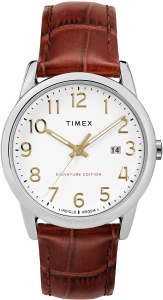 One of the best movie watches of all times clearly goes to the Omega Speedmaster in “Apollo 13.” Since the watch plays such a crucial part in the movie, it was clear that no stand-in would do. Director Ron Howard was famously attuned to every detail and used the exact same model in the film that was actually used aboard the real Apollo 13 space mission. After all, how many watches are actually approved for wear in outer space by NASA? Since you’ll just be wearing yours on planet Earth, this Citizen watch will work just fine, and it even has the same chrome band and black face. $154.50, amazon.com