There is nothing more fulfilling than an ultra-specific Lego set. You’ve seen the Lego Central Perk building set, the “Seinfeld” apartment, complete with hidden superman stickers and a festivus pole, and perhaps most impressive, their colossal 9,000 piece Titanic set. Now, Lego has unveiled a Dunder Mifflin-inspired set for fans of “The Office” — it even includes Kevin’s pot of chili and a stapler in Jello.

Released July 15, the 1,146-piece structure recreates some of the most memorable scenes from the beloved sitcom, with 15 character mini-figures (the most ever included in an “Office” Lego set).

Crazy specificity is power of Lego. Are you deeply into  mythology and Roman history, there’s a Lego set for that. Marvel fan? Take your pick of the countless Lego offerings. Here is our list of favorite Lego sets perfect for every brand of fanatic in your life.

Recreate the best scenes from “The Office” with this hyper-detailed Lego set that allows you to build out the most memorable scenes from the hit NBC sitcom. Catch Michael Scott with his famous World’s Best Boss mug and Stanley sitting at his desk with a ginormous pretzel in honor of Pretzel Day (IYKYK).

“Home Alone” fans will not be disappointed with this ultra-specific set, designed by a fan himself who submitted his idea to the Lego Ideas platform. After putting together the total of 3,995 pieces, the largest structure part of the Lego Ideas concept, you can move through the recognizable mansion to act out some of the best scenes from the film, such as Kevin McCallister’s aftershave fiasco, the infamous fake Christmas party and his unparalleled zip-line adventure.

You can almost smell the salty sea taking in this magnificent 9,090-piece Titanic set. This working model allows you to raise and lower the anchor and also turn the propellers to spin the engines. This is the largest Lego set ever compiled by the company and if you assemble the whole thing in under 48 hours and you’ll be the (very tired) king of the world. Currently available for pre-order on the Lego site for a whopping $629.99.

Described as featuring the Top 10 “Seinfeld” Easter eggs, this new 1300-plus piece set out Aug. 1 includes everything from a marble rye and a Festivus pole to a “Prognosis Negative” VHS tape. All four funny New Yorkers plus neighbor Newman is accounted for in minifig form, as well. (Unfortunately, though, the Jerry minifig is NOT in a puffy shirt, nor holding a black and white cookie.) The main build is Jerry’s apartment (complete with Superman stickers for the refrigerator and studio lighting to explain the lack of fourth wall), but there is also a much smaller secondary piece to put together for the titular character’s standup segments.

If you’ve gotten bored recreating classic scenes of “Friends” set in Central Perk, now you can expand into all of the antics that took place in Joey and Chandler’s apartment, as well as Monica and Rachel’s-turned-Monica and Chandler’s apartment. At almost 2,050 pieces, the double room set features everything from Monica’s secret messy closet to the Barcaloungers. Similar to the Central Perk set that came before it, these apartments are treated like they are being built on a Hollywood soundstage, framed in scaffolding and studio lights for all of your eventual stop motion TikTok video needs. All six titular friends are represented in new minifig form, and this time — oh my God! — Janice is also included.

Build the most powerful object in the universe. Marvel just dropped this Lego recreation of the Infinity Gauntlet, complete with Infinity Gems. Recreate the snappening or use your glove to restore justice and peace in the world, it’s entirely up to you. Only 590 pieces even the youngest of Groots should be able to reconstruct this golden glove. Just don’t hesitate to pull the trigger on this purchase as it’s already sold out on Amazon.

We didn’t know Lego art like this existed, until we saw the red Venom tongue turned into Lego blocks in this comic book inspired Venom head. This bust of the Marvel symbiote character straddles the line of good and evil, much like his movie version from the film starring Tom Hardy as human reporter Eddie Brock by day, flesh craving alien parasite Venom by night. (or whenever Venom is hungry, which is technically the time). The 565 piece is perfect for any homes mantel or bedside table because it is, without a doubt, art.

Celebrate your love of all things Spider-Man by bringing chaos and madness directly to Peter Parker’s place of employment. This Marvel Lego kit builds the iconic Daily Bugle building, home of New York City’s finest paper. This massive build comes with 25 minifigs including the Green Goblin, Black Cat, Spider-Gwen, Venom and (of course) J. Jonah Jameson. With 3,770 pieces and battle-ready Lego bricks there is no comic book scene you can’t recreate.

Disney characters aren’t just for kids and nothing proves that better than Lego’s buildable Mickey and Minnie statues. They stand at 15-inches tall and are posable, with Mickey holding a soapbox guitar and Minnie holding a bouquet of flowers. (Additional pieces of the set include an old-fashioned film camera on a tripod and a tiny photo album). Intended for builders ages 18-years-old and up, they are designed to be decorative additions to one’s home or workspace, right down to the classic film cel base they stand on. But, that’s not to say there’s not fun to be had with them as well.

Retailing for almost $550 and coming in at just over 9,000 pieces, the recreation of the historical Colosseum in Rome is arguably one of the most extravagant mass-produced Lego sets on the market at the moment. It is also the literal largest and likely one of the most methodical to put together, as the majority of the pieces are the same color and need to be arranged in an oval pattern that is quite hypnotic. Details such as archways, pathways and olive trees will further lend themselves to the authenticity of the collector’s version of the real-life amphitheater. 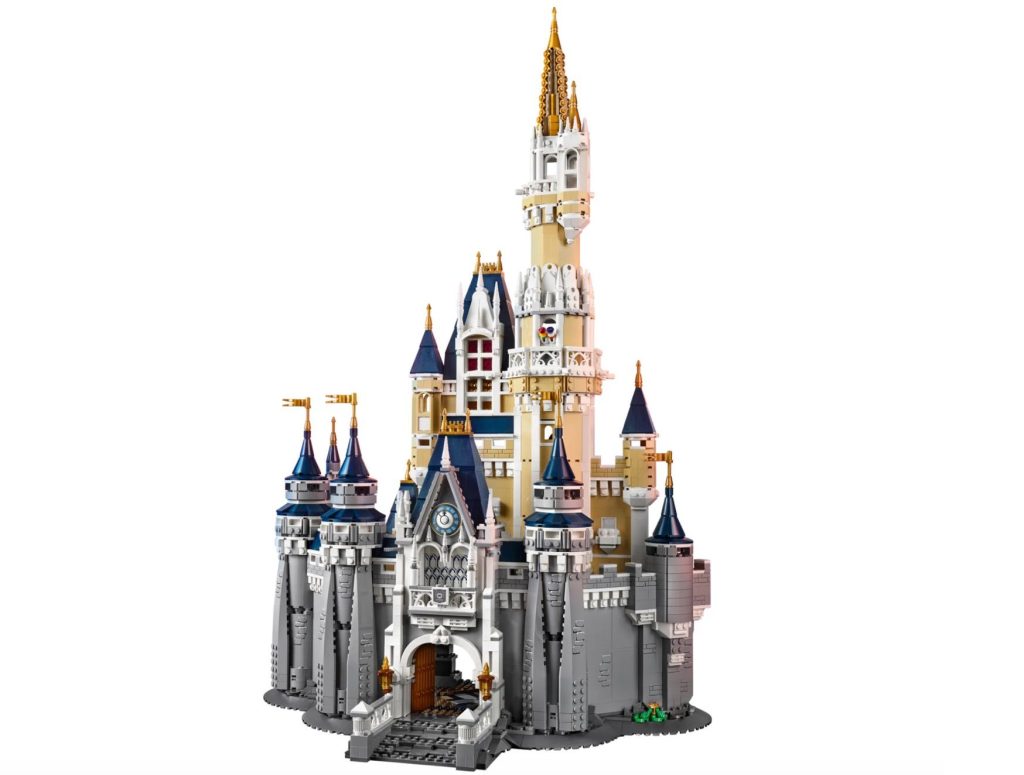 If you have a weekend to kill (maybe it’s raining, maybe you’re still waiting out your final quarantine before you’re fully vaxxed), the Disney castle set might be even more fun to put together than to play with. Featuring more than 4,000 pieces, including minifigs of everyone’s favorites Mickey and Minnie Mouse, the build is one-part architectural and one-part perfect Disney detail. The back of the castle features individually themed rooms for classic properties from “Snow White and the Seven Dwarfs” to “Aladdin.”

Who needs a real game console when you can build one out of Legos! Cobble together your own Nintendo Entertainment System out of the 2,646 piece kit and then start on your own little TV. Captured in time (and on your Lego screen) is the world’s greatest video game from “Super Mario Bros.”

Lego suggests this set be built by someone over the age of 18, but in reality it is fun for the whole family. The youngest members, who may still watch the show often, will get a kick out of seeing the colorful brownstone and Hooper’s grocery come into their own home in a new way, while the older members get a sense of nostalgia building Bert and Ernie’s apartment and Oscar the Grouch’s trash corner and even putting pigeons on the roof. Fair warning, though: You may find yourself alternating between singing “Rubber Duckie” and counting the various pieces as you dump them out from the bag while working on this. (“One — one Big Bird minifig, ah ha ha!”)

Recreate the magic of “Harry Potter” by building your own Hogwarts school. The 6,020 piece set comes with all manner of magical oddities from including 27 microfigures from the books and movies, the Whomping Willow, Hagrid’s Hut and much more. Get it before the holidays so it can be your “festive” decor (and then you have a good excuse to let it stay up for months on end!)