The 10 Best Gifts for ‘Hamilton’ Fans

Lately we’ve all been dealing with many plans getting postponed. But this time, something is happening sooner: “Hamilton” was scheduled to hit movie theaters in October 2021, but it’s arriving on Disney Plus July 3. It’ll give us another way to celebrate the favorite founding father on Independence Day.

Few musicals have swept the theater world — and the world at large — like “Hamilton.” Winner of 11 Tony Awards and the 2016 Pulitzer Prize in Drama, it was created and composed by Lin-Manuel Miranda, who also starred in the title role. The soon-to-be-released film version captures a 2016 live performance by the original Broadway cast at the Richard Rodgers Theatre in New York City, directed by Tommy Kail. To tide all the devotees over until July 3, we’ve rounded up the best gifts for “Hamilton” fans.

Any true “Hamilton” disciple needs the original Broadway cast recording in their arsenal. Whether you opt to give it via a streaming subscription, MP3, CD or LP, your fan can sing along with Miranda, Leslie Odom Jr., Daveed Diggs and the rest of the OG cast. $14.80, amazon.com

Mix history with sass and show your love with this statement T-shirt. Founding Father buffs will be in on the joke. The lightweight tee features a classic cut. It comes in men’s, women’s and youth sizes in four colors, so you’ll be able to find the perfect one for every fan on your list. $19.99, amazon.com

A must-have tome for any “Hamilton” zealot, the 2004 biography is what started it all. Miranda came up for the idea of his musical while reading the book. Penned by National Book Award winner Ron Chernow, the full biography tells the sweeping tale of Hamilton’s life in riveting detail, from his humble beginnings to his rise —and, of course, fall — in America. $23.85, amazon.com

Only Hamilton could have a card game that has dueling and serving time in debtor’s prison. Your knowledge of history and your wit will be put to the test as you battle to collect as much “colonial cash” as you can. Along the way, you’ll see how Hamilton’s life events can change the entire course of the game. It’s designed for two to six players, so it’s ideal for any game night. $17.68, amazon.com

Wear your fandom on your sleeve — er, wrist — with this inspiring copper bracelet. Inscribed with “rise up,” each cuff is hand-stamped and the metal can be adjusted to fit any wrist. It comes with a gift pouch too, making it a great present for any occasion. $16.95, amazon.com

If you know a fan who can tickle the ivories, they’ll want this on their music stand. You don’t need to be Mozart to play it either, since the arrangements are easy. It includes nine songs from the Broadway musical, including “Alexander Hamilton,” “My Shot” and “The Schuyler Sisters.” $14.79, amazon.com

The Unemployed Philosophers Guild has transformed some of the greatest minds into adorable plush dolls. Now the scribe of The Federalist Papers gets the same treatment and is included in the Little Thinkers collection. Standing about 11” tall, he comes with a removable tag with his portrait, quotes and notable achievements. Whether he adorns a bookcase, couch or office, he’ll bring some intellectual whimsy to any space. $18.95, amazon.com

Every day will start off as a good day when you turn the page on this daily calendar. Taking inspiration from the musical, each day reveals something different about the Founding Father. Sometimes it’s facts about the life of Hamilton, other times it’s lyrics from the Broadway show. $15.99, amazon.com

You’ll really want to stay inside the lines for this one! The adult coloring book shares Hamilton’s life story, starting with his early life in the Caribbean all the way to his infamous duel with Aaron Burr. Aside from coloring in your favorite characters from the hit show, it’s a fun way to relax and work off some stress, all while getting a dose of American history. $8.99, amazon.com

Any “Hamilton” stan will tell you they can never have enough Hamilton tees in their closet. This tongue-in-cheek, classic-cut T-shirt puts A. Ham in modern sunglasses. It comes in five colors and is sized for men, women or kids. $17.96, amazon.com 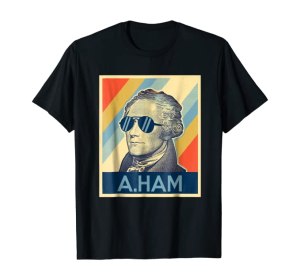 Variety editorial products are independently selected. If you buy something through our links, PMC may earn an affiliate commission.