The Best Gifts for Marvel Fans: From a ‘Spider-Man’ Rug to an MCU Arcade Cabinet

The MCU is back in full force following the December release of “Spider-Man: No Way Home,” which quickly became Sony’s highest-grossing film to date. Now, Marvel fans have a packed slate of films to look forward to in the coming months, such as “Doctor Strange in the Multiverse of Madness,” “Thor: Love and Thunder” and “Black Panther: Wakanda Forever.”

And with every new release comes coveted companion merch that make the perfect gifts year round. From a brand new Marvel collection with Ruggable, to super hero-themed arcade cabinets (currently $250 off), shop the best Marvel merch below.

Ruggable’s newest Marvel collection features all your favorite characters from the Multiverse, such as Spider-Man, Black Panther, Iron Man and Captain America. The collection includes 28 chenille rugs in a wide range of patterns and designs, including vibrant Captain America comic strips and more subtle Wakanda-themed imagery.

“Spider-Man: No Way Home” is finally getting its 4K UHD and Blu-ray release on April 12, and the digital copies are already available to pre-order on Amazon for 36% off. Since opening in theaters in December, the Tom Holland and Zendaya-helmed blockbuster grossed $772 million, making it the highest grossing Sony release in history. If you plan to rewatch the newest Marvel release from home, you’ll want to make sure your home theater is set up with the best tech, such as a soundbar and 4k projector.

Always have Spidey by your your side with this retro lava-style motion lamp, a perfect addition to any kid’s bedroom or playroom, or comic-loving adult.

Pottery Barn has a wide range of best-selling wall art celebrating some of the best characters in the MCU. The painted canvas makes for playful decor that doubles as an artistic night light, with batteries that glow the superhero’s name in the dark.

This beautiful hardcover, tome features an introduction from Stan Lee and details on more than 1,200 Marvel characters, from superheroes to villains. This updated edition includes expanded entries and the addition of more than 50 new characters like Anti-Venom, Sabreclaw, Doctor Nemesis and Spider-Man 2211. It also includes updates from the latest events in “The Age of Ultron” and “Infinity War,” among others. Each entry features original artwork from the Marvel comic books, along with text from the preeminent authorities in the comics, graphic novel and entertainment space. If you’re looking for more books for pop culture junkies, check out our coffee table book gift guide.

The brand new Loki Hot Toy, available for pre-order, is a masterful replica of Tom Hiddleston’s God of Mischief as portrayed in the Disney Plus series. The foot-tall figure features a newly developed head sculpt with highly detailed accessories such as his sword, tie, a pair of daggers and Miss Minutes.

If you’re looking to delve into the Marvel Universe in another form, look no further than this digital pinball machine, featuring 10 Marvel titles for you to immerse yourself in. The machine has a retro arcade feel but is built with high-tech features, such as built-in haptic feedback, accelerometer and nudges and tilts — all for an impressively affordable price.

Read More: These Stylish Arcade Cabinets Will Fill Your Home With ’90s Nostalgia

This stunning Lego set is a must-have collector’s item for any Marvel fan. The 590-piece model is a golden recreation of the iconic Infinity Gauntlet, featuring colorful Infinity Stones and a sturdy stand for an easy display.

This six-inch Hasbro action toy is one of the most realistic depictions of Shang-Chi, and even comes with his signature bo staff so you’re prepared for battle during imaginative play. 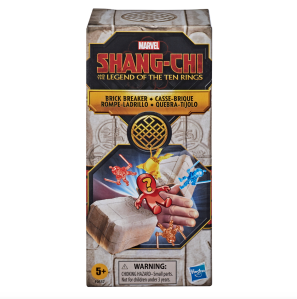 If “Shang-Chi” inspires you to practice your martial arts, then test your skills with this fun brick breaker, which reveals five action figures from the movie once you successfully crack it open.

Add to your Funko Pop collection with this adorable cartoon iteration of Shang Chi, clad in his signature black and red Kung Fu uniform and bo stick.

The Great Protector Dragon Figure (27% Off)

Pair your Shang-Chi action figure with this Protector Dragon figure, who uses his benevolent power to help the Kung Fu Master find his destiny. Standing 11 inches tall, it features flexible body parts and multiple joints for easy movement and role-playing.

These gorgeous Marvel-themed cards are the perfect addition for any house party or living room decor. Each card features cosmic foil that changes color in the light, with custom art of the most iconic Marvel characters such as Iron Man, Hulk, Thor and Black Panther, among others.

This genius deco light is a best-seller on Amazon for good reason. Order two of these Iron Man Masks to flank either side of your bed or couch for a unique Marvel-themed room that will impress any visitor.

Up your Crocs game with these awesome Marvel jibbitz. Choose from Captain Marvel, Black Panther, Captain America and the universal Avengers charms to peg onto your favorite shoes.

Any true “Black Widow” fan should get their hands on the original comic book, in which Natasha Romanoff’s captivating tale is told comprehensively from the beginning. This graphic novel is illustrated by Don Heck, John Buscema, Gene Colan, George Perez, with contributions from the one and only Stan Lee, and tells the story of Romanoff’s evolution from her early days as a Russian spy to her action-packed fights in the dark corners of the Marvel Universe.

Honor Black Widow’s  memory from “Avengers” with her Funko Pop figure, outfitted in the all-black attire she wore while assembling with the rest of the superheroes for the first time.

You can never have too many Funko Pops, especially if you’re in the business of collecting them. This new collaboration with Disney Plus features everyone’s favorite villain as a stylized Pop! in his signature tan suit and tie.

Add to your Funko Pop! collection with this awesome “WandaVision” vinyl bobblehead. The figure features Wanda Maximoff in her costume from the special “Hallowen Spooktacular!” episode, clad in her pink tights and classic burgundy cape and holding a jack-o-lantern instead of her usual Darkhold textbook.

If you weren’t able to get your hands on one of the 3,500 Loki Charms cereal boxes that were released in tandem with the series premiere on June 9, then this Loki Charms t-shirt will have to do. The old-fashioned graphic is reminiscent of ’80s style cereal boxes that give a funky look to the Marvel-inspired merch.

Avengers merch has never looked more sophisticated than with these retro movie poster art prints from Etsy. The two-pack features imagery from “Infinity War” and “Endgame,” mixed with a midcentury modern design that work as great decor for any studio, office or living room.

Crack open a cold one in style with this adorable gold bottle opener, designed to look like Thanos’s  gauntlet, bejeweled with the MCU’s valuable Infinity Stones. 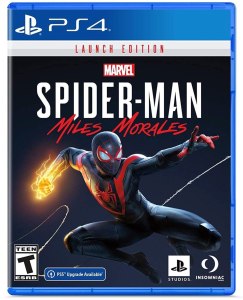 Fans and gamers cannot stop talking about the game play, narrative and absolute beauty that is this video game for Play Station. Starring the comic book legend Miles Morales, players will have to master his bio-electric venom blast attacks and camouflage powers alongside his web-slinging acrobatics, gadgets and skills. Plus, he has a cat. For more gifts for gamers, head to our guide. 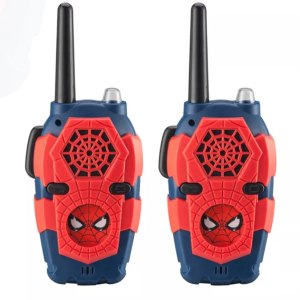 Remain super cute while prowling for danger in your backyard. These “Spider-Man Homecoming” inspired walkie talkies could easily prolong the inevitable cell phone ask from your children. The battery-powered toys light up and provide Marvel-inspired sound effects. Plus, Target is having an early Black Friday sale where select toys are buy one, get one half off.

‘Black Panther’ Soundtrack on Vinyl (17% Off) 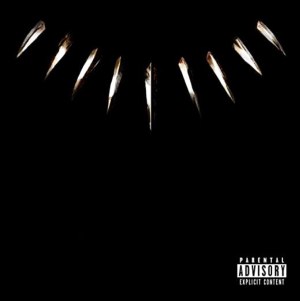 While we’re all waiting for another offering from Kendrick Lamar, there’s always the “Black Panther” soundtrack which he produced and worked on for years in secret. This classic soundtrack has been lovingly transferred onto vinyl, which is perfect because the album beckons to be listened to from start to finish.

This new release combines the mischievousness and unpredictability of “Cards Against Humanity” with the sardonic wit of “Deadpool.” Pegged for “mature audiences” (according to the manufacturer), the game pits players against their friends to see who can write the best caption for Deadpool’s compromising positions. The player with the funniest or most creative description wins. Check out more board and card games inspired by our favorite TV shows and movies here.

For something truly out of this world, Marvel fans will want to get their hands on the Iron Man MK50 Robot, the first-ever humanoid robot inspired by the Marvel Cinematic Universe (MCU). Built by UBTECH Robotics, and inspired by Tony Stark’s body armor, the 13-inch robot combines advanced robotics with augmented reality to let you complete AR missions and interact with heroes and villains both virtual and real.

Pair the robot with your phone to control its movements, lights, and sounds; learn some easy programming to code original audio, upgrade weaponry and create custom action sequences to personalize your interactions. Reviewers say the robot is easy to set up and a great gift for Marvel fans both young and old.