As 007 fans know all too well, no big-budget film in recent memory has been plagued by more setbacks and delays than “No Time to Die.” But Daniel Craig’s final entry as James Bond is finally here after hitting theaters on Oct. 8 — and it’s already received rave reviews.

Now that the long-awaited film is here, there’s no better time to stock up on gifts for the lucky Bond fan in your life, especially as the holidays approach.

‘No Time To Die’ Navy Sweater

James Bond spends much of the final act in “No Time To Die” roughing about in this gorgeous navy sweater. Designed specifically for the film itself this military sweaters has patches on the shoulders, elbows and cuffs. The neckline was designed to reflect Bond’s close association with the Royal Navy, according to the designers at N.Peal. It’s 90% superfine Merino wool and 10% cashmere, and all action.

Up the interior design in your kitchen with this compact Smeg toaster, the same one that eagle-eyed fans will know is tucked away in Q’s apartment in “No Time to Die.” In addition to a very British, very “Bond”-like exterior, outfitted atop a retro-style design, the two-slice toaster also boasts impressive functionality, with two wide slots and a a six-setting knob.

Bond’s idyllic Jamaican villa in “No Time to Die” is stunning, designed with retro decor and art reminiscent of Ian Fleming’s own Jamaican house where the Bond story originated. One such piece that makes an appearance is the Tivoli radio. The table radio features a simple design and superior sound  reproduction, packed inside an attracted handmade wooden cabinet.

The famed camera company Leica has a deep-running relationship with the Bond films, who utlilize the vintage-style digital cameras both on set and behind the scenes. In “No Time to Die,”  Leica worked with the 007 production team to set up the camera in both Bond’s Jamaican villa and Q’s home in London. But the Leica camera is more than just a prop, the Q2 is a full-frame fixed-lens camera praised for its impeccable photo quality and compact size.

Celebrate Daniel Craig’s last run as Bond with Bollinger Brut, made by the small family-owned champagne house loved by 007. And considering Bond’s impeccable taste, there’s no question this sparkly will be a sophisticated addition to any house party. This sparkling wine contains hints of roasted apples, apple campote and peaches for a complete aromatic experience.

From “Dr. No” to “No Time to Die,” this ultimate 007 companion covers the making of every single Bond film. The  648-page hardcover book is the most comprehensive version to date, featuring more than 1,007 images and an oral history of 150 cast and crew members.

Sprint like a detective on the run in these stylish, all-black Adidas sneaks, in collaboration with the 007 franchise. The Ultraboosts are high-performing running shoes inspired by the action scenes in “No Time to Die.” A print on the responsive cushioning give it the look forged carbon, while an image from the movie is depicted on the sockliner.

Currently the most up-to-date 007 Blu-ray collection on the market, this attractive box-set comes complete with the first 24 Bond movies in one convenient package. Divided into three individual plastic cases that fit snuggly in a thick cardboard slipcase, the collection also includes a slick mini-booklet illustrating the various poster designs of the franchise, along with a wonderfully comprehensive 90-minute documentary titled “Everything or Nothing: The Untold Story of 007.” Unlike other James Bond Blu-ray collections, this set also contains downloadable digital versions of each official film in the series. 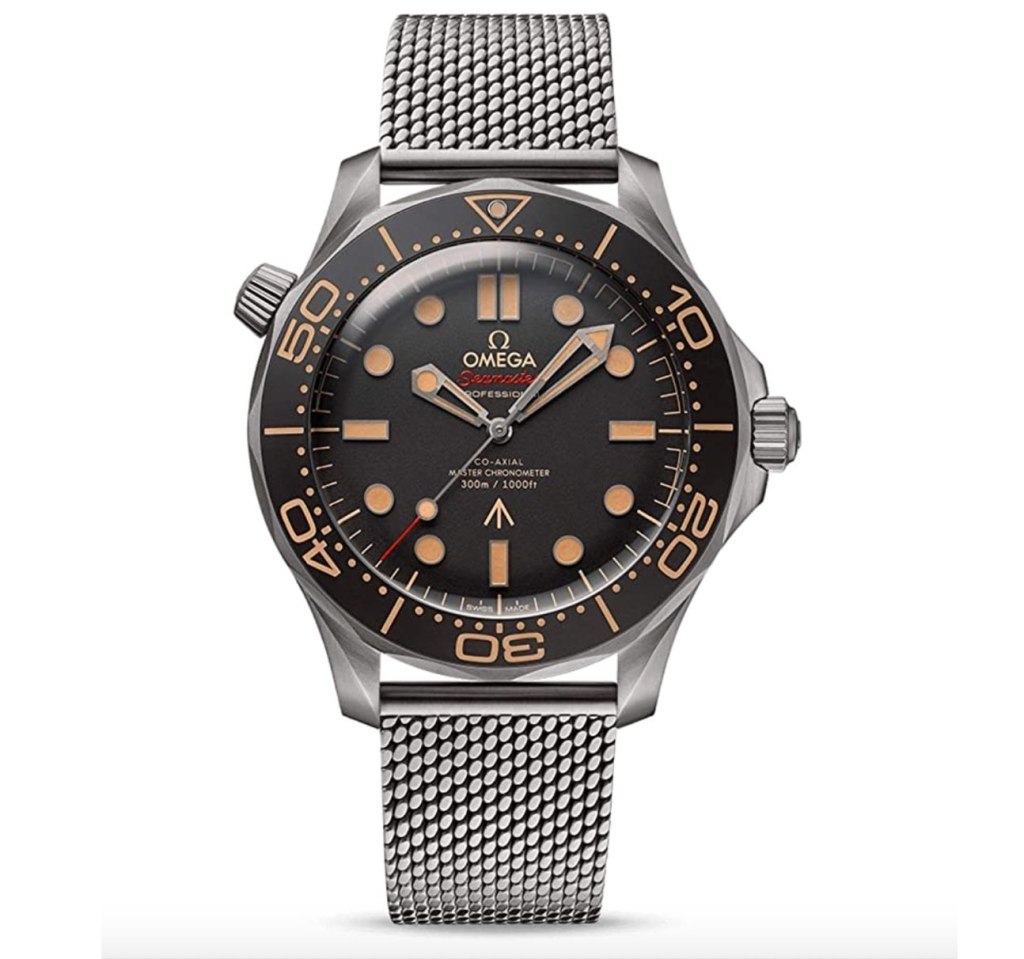 If money is no object, then this special edition 007 Omega Seamaster men’s watch is perhaps the ultimate James Bond gift. Worn by Daniel Craig in several of the recent Bond films – including “No Time to Die” – this astonishingly attractive timepiece doesn’t come equipped with an exploding alarm function the way it did in “Spectre,” but that doesn’t mean it isn’t worth the steep price tag. Made of lightweight Grade 2 Titanium, its design is noticeably thinner than the standard Seamaster Diver models, making it perfect to wear with a tuxedo or a Kevlar combat suit. 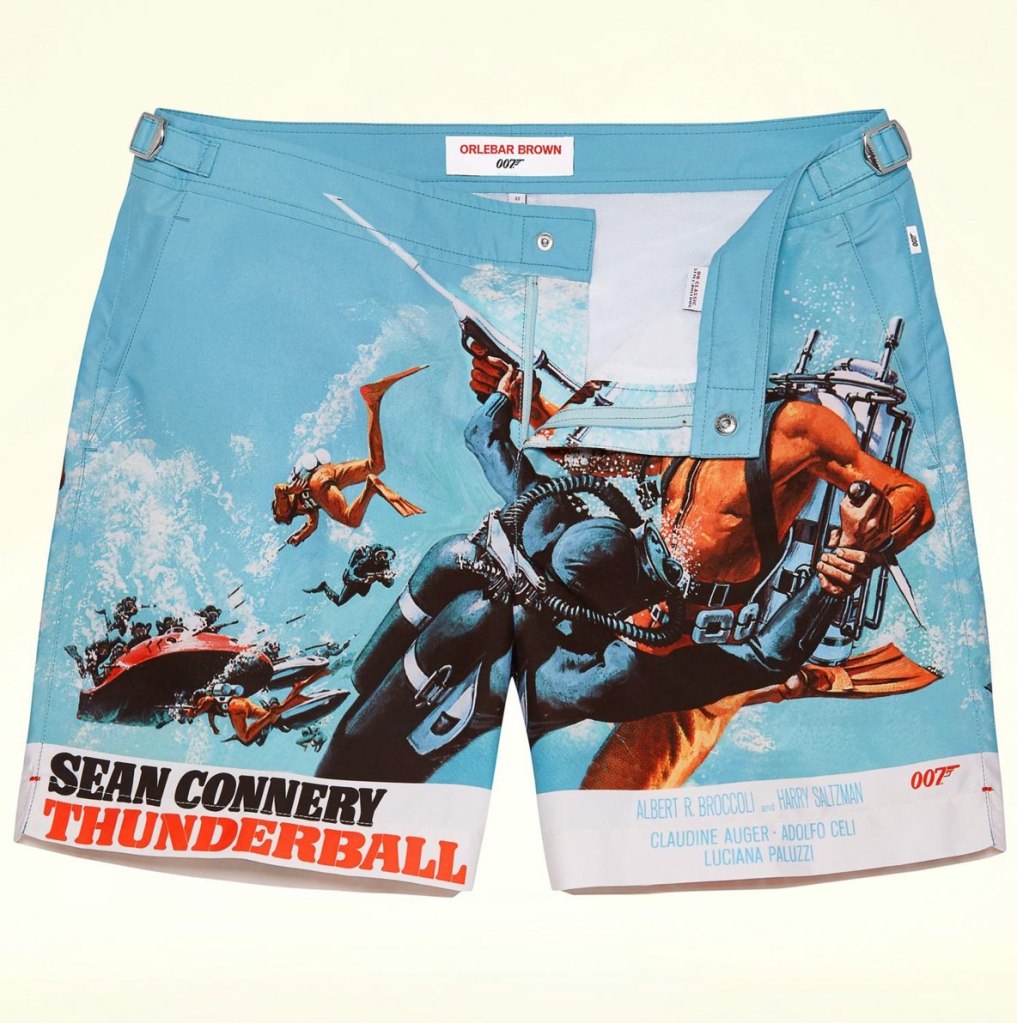 Much of the spectacular action in 1965’s “Thunderball” took place underwater, with Bond battling dozens of scuba-diving enemies. If you happen to find yourself on a similar deep-sea adventure, this pair of tailored men’s swim trunks from Orlebar Brown will allow you to snorkel in style.

When the world met Daniel Craig’s James Bond in “Casino Royale” he was wearing basically this exact peacoat. Before the Brioni tuxes and Tom Ford dinner jackets it was this classic coat that introduced the newly minted 007. After the peacoat reappeared in “Skyfall” designer Billy Reid reissued the past style, so it would (hopefully) never run out of stock again. This slim-fit, black coat featured is 80% wool and features a front double-breasted closure. 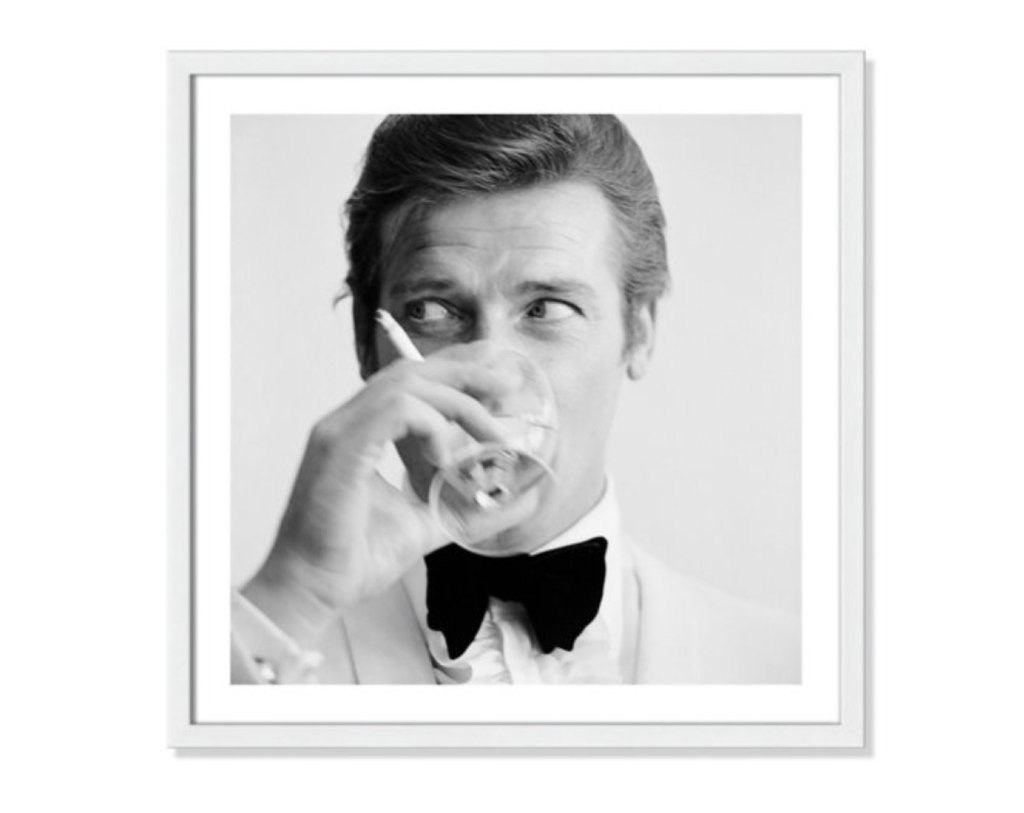 No other Bond actor combined mischievous humor and debonair charm quite like the legendary Sir Roger Moore, and this wonderfully candid black & white portrait by photographer Peter Ruck captured the star at his dashing best. Titled “Shaken Not Stirred,” it presents Moore in mid-sip, with his signature raised eyebrow providing a playful grace note to the image. Like the iconic behind-the-scenes shot of Sean Connery leaning leisurely against the Aston Martin DB5 while filming “Goldfinger” in Switzerland, this framed portrait will add a touch of class to any Bond fan’s living room.

‘From Russia with Love’ Japanese Movie Poster (20% Off)

Few film franchises have done more to revolutionize the art of poster design than the 007 series has, and this dynamic “From Russia with Love” poster that graced Japanese movie theaters in 1964 is one of the most stunning examples. Cleverly combining key images and details from Sean Connery’s second Bond adventure into a stylized collage, this poster belongs framed on the wall of every 007 fan with an eye for art. It’s available in three print sizes or on a professionally hand-stretched canvas. And for Black Friday Art.com is having a 20% off sale on the entire site.

Relive the excitement of James Bond’s high-stakes Texas hold ‘em poker game from “Casino Royale” with this recently released 007-themed deck created by Waddingtons of London, one of the United Kingdom’s most historic card designers. Featuring classic Bond movie posters from around the world – including Germany’s eye-catching “Moonraker” poster and Japan’s flashy “Licence to Kill” poster – these cards are the perfect stocking stuffer for the secret agent on your gift list.

Bursting with never-before-seen photographs and previously unpublished documents and archival material, “The Goldfinger Files” is a handsome hardcover tome that offers the definitive visual history of the film’s iconic Alpine car chase sequence. Beautifully edged with shimmering gold foil, and containing original typed screenplay pages and candid, behind-the-scenes pictures, this oversized book will transport longtime Bond fans back to 1964 with its impressive attention to detail. 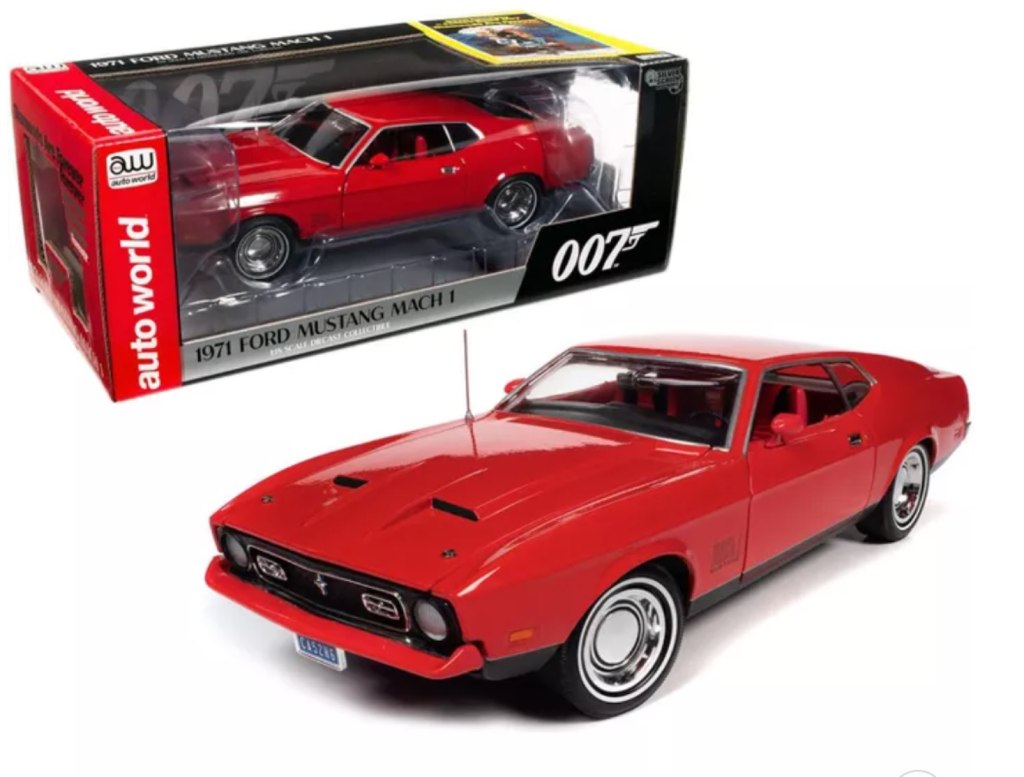 James Bond has driven some of the most exciting vehicles on four wheels while pursuing madmen bent on world domination, and the candy-apple red Ford Mustang Mach 1 that he drove in “Diamonds Are Forever” is one of the most impressive. Help your gift recipient recreate 007’s wild Las Vegas joyride by purchasing them this authentically detailed 1/18 scale die-cast model.

Sir Roger Moore’s blockbuster Bond films delighted moviegoers with their cheeky humor and wild special effects, and no title crystalizes that more than the over-the-top adventure “Moonraker.” Still one of the most financially successful entries in the franchise, this sci-fi spy thriller saw Ian Fleming’s earthbound hero trading in his signature tuxedo for a gleaming silver space suit. Popular toy company Funko pays tribute to the 1979 box office hit with this charming vinyl figurine that captures 007 at his outrageous best. 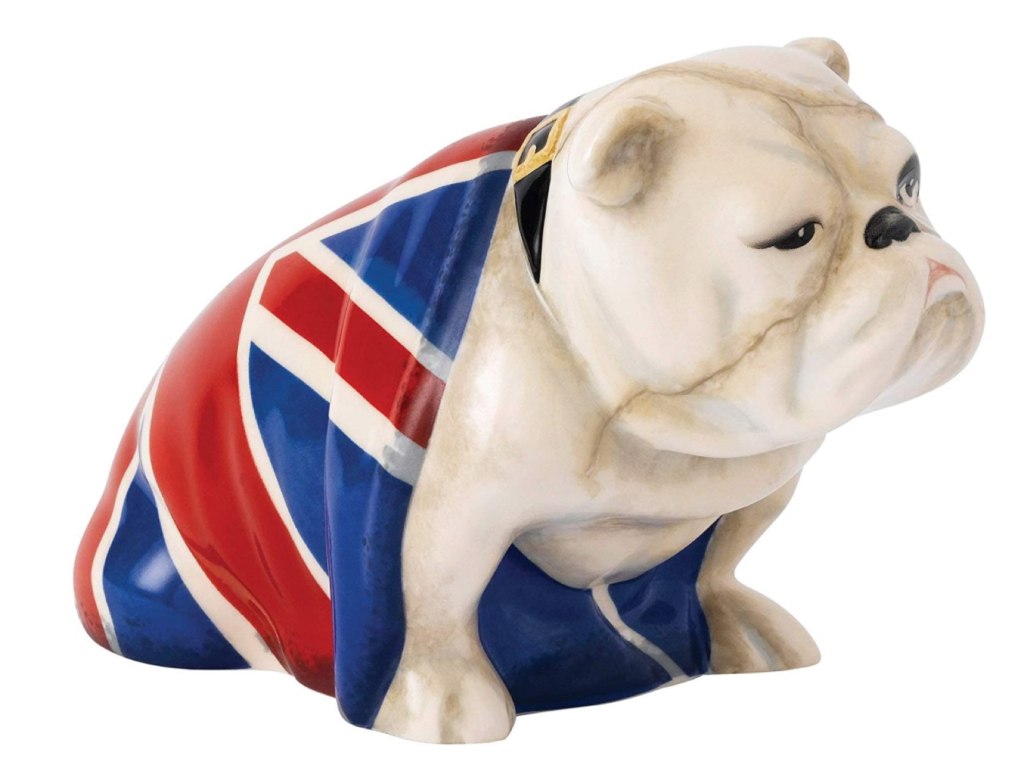 M’s parting gift for Bond in “Skyfall,” no matter what happens Jack the Bulldog will always survive. According to the vendors at Royal Doulton, Jack will indeed be returning for “No Time to Die” so the latest version of this china canine has a few marks to show his long journey. This survivor will be presented in a “No Time To Die” special gift box with a certificate of authenticity.

It’s common knowledge among 007 fans that Ian Fleming borrowed the name of a highly respected American ornithologist when it came time to christen the main character of his literary spy series. What is less well known is the biographical story of the real James Bond. Born to a wealthy family, but financially cut off while in his twenties, the birding Bond lived a remarkably exciting life of his own, filled with shotgun-toting adventures and island-hopping expeditions in the name of science. His colorful biography is brilliantly chronicled in author Jim Wright’s fascinating new book “The Real James Bond: A True Story of Identity Theft, Avian Intrigue, and Ian Fleming.” 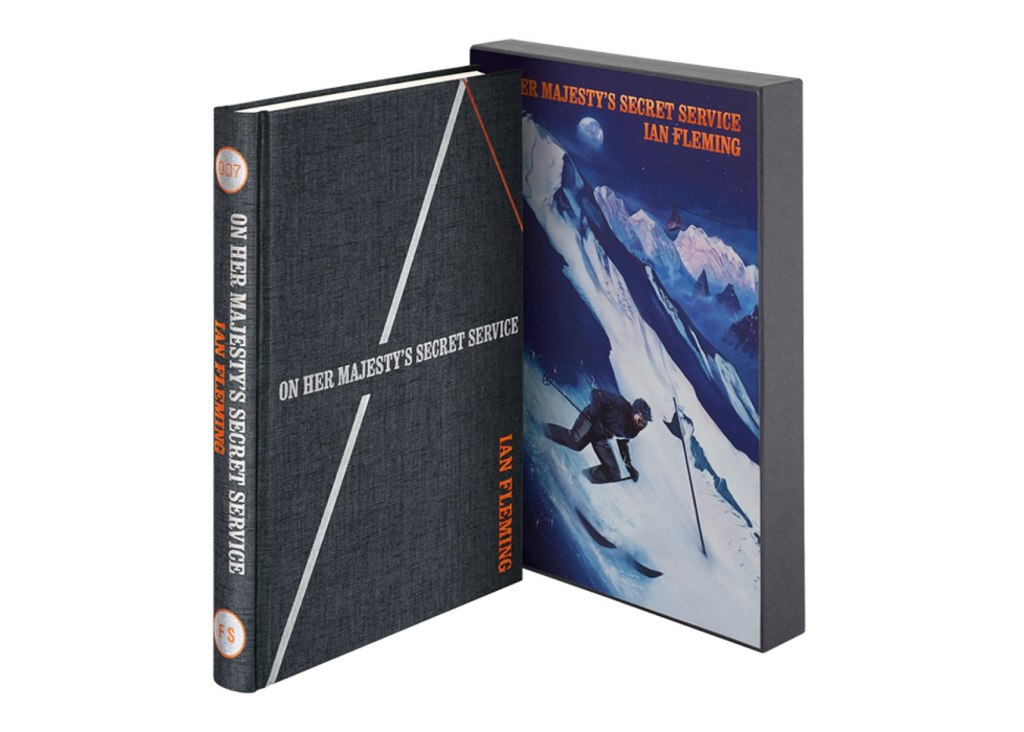 Originally published in 1963, Ian Fleming’s thrilling 10th Bond novel is the latest release from the famed British publishing company the Folio Society. Gorgeously illustrated by award-winning London-based artist Fay Dalton, this hardcover edition of “On Her Majesty’s Secret Service” comes elegantly bound in blocked cloth and fits snuggly in a collector’s slipcase, making it an essential addition to every Bond fan’s personal library. Previous titles in the Folio Society’s lavish Bond series include “Casino Royale,” “Dr. No,” and “The Spy Who Loved Me.”