Anthony Bourdain had a way with words, penning 13 best-selling books throughout his life, most of them rollicking tales about making his way through the tumultuous food industry throughout the ’80s and ’90s.

But his latest book, “World Travel: An Irreverent Guide,” despite being credited to Bourdain himself, was actually assembled by his good friend and longtime assistant Laurie Woolever, based entirely on Bourdain’s own writing and hours-long interviews she conducted with him before his death. His final, best-selling book epitomizes what the raconteur was known for, tracing readers through an entertaining and informative travel guide punctuated by the chef’s one-of-a-kind stories. In addition to his own travel stories, though, “World Travel” is special in that it’s a posthumous tribute to the late chef, including essays penned by those closest to him, such as his brother Christopher, the music producer Steve Albini and Nari Kye, who worked as a production manager on “No Reservations.”

In honor of his birthday, coined Bourdain Day, we rounded up a complete list of every Anthony Bourdain book to honor the beloved chef — from his seminal book “Kitchen Confidential,” which is credited with pulling back the curtain on the restaurant industry for the first time, to Woolever’s most recent tributary biography.

Despite being credited to Bourdain himself, “World Travel” is really the product of his good friend Laurie Woolever, who assembled tales from Bourdain’s own writing in addition to hours-long interviews she conducted with the chef before his death. The biography features tribute essays from those closest to Bourdain, including his brother Christopher, music producer Steve Albini and Nari Kye, who worked as a production manager on “No Reservations.”

Bourdain was more of a television personality and cultural critic by 2016, having left the kitchen behind to dedicate time to his daughter, nine years old at the time, and his ultra-successful shows. But in “Appetites,” the chef goes back to his roots by putting together a set of simple recipes he liked to make for his friends and family, set next to artistically messy photos of his food.

Bourdain teamed up with writer Joel Rose for a fantastical graphic novel which, set in a not-so-distant LA ruled by master chefs, has people literally go to war for a seat at a table. There’s two sides: the Internationalists, who blend food from all over the world for exotic flavors, and the Vertical Farm, who prepare nothing but vegan, organic macrobiotic dishes. But both sides want Jiro, the master sushi chef, to join their factions. Follow it up with the prequel, “Get Jiro: Blood and Sushi.”

‘Medium Raw: A Bloody Valentine to the World of Food and the People Who Cook’

In his second memoir, Bourdain shares his candid critiques of some of the biggest names in the culinary space, including Alice Waters and David Chang. Because of his gained wisdom, many critics prefer this memoir over “Kitchen Confidential.”

‘No Reservations: Around the World on an Empty Stomach’

This would be considered Bourdain’s most interesting book for those that knew him from his starring role on the popular show on the Travel Channel from 2012 to 2015. “No Reservations” offers a behind-the-scenes look into the show, featuring incredible shots and insights about places like New Zealand and France to Russia and Las Vegas.

Bourdain’s 2006 book offers exactly what the chef’s writing is known for, filled with irreverent and enthusiastic stories from his time in the kitchen. An entire chapter is dedicated to what he believes is the most underrated person behind the scenes: the dishwasher.

Inspired  by Fitzgerald’s “Pat Hobby” stories, Bourdain’s third novel follows an ex-con who falls in love with a chef named Nikki, derailing his new job in the club and restaurant business. A tale of romance at its heart, the story is also a pitch-perfect story of food, crime, sex and mayhem.

‘A Cook’s Tour: In Search of the Perfect Meal’

This is basically “No Reservations” in book form, following the neophyte TV star as he tries the craziest foods around the world on a quest to find the perfect meal. The raconteur will have you immersed in his stories as he travels across the globe from Saigon to the California’s French Laundry. 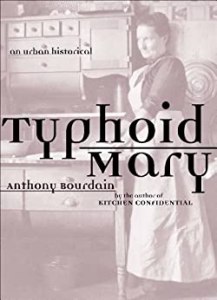 The multi-hyphenate writer doubles as a historian in his monograph about Mary Mellon, patient zero of Typhoid Fever in New York at the turn of the 20th century. Including impressive research from that point in history, Bourdain imagines Mellon as an innocent girl who unwittingly spreads the disease as a restaurant cook.

Bourdain’s renegade memoir “Kitchen Confidential” catapulted him into fame in 2000, even before his celebrity reached higher echelons as a TV star. The breakout book was first born as a piece he submitted to “The New Yorker,” which he was immediately asked to expand into a larger book tracing his path to becoming a renowned chef at some of the country’s most coveted restaurants.

‘Bone in the Throat’

The acclaimed first novel by Bourdain, “Bone in the Throat” follows the up-and-coming chef Tommy Pagana as he works a stint at his uncle’s restaurant in Manhattan’s Little Italy. Things are going well until he finds himself at the center of big-time crime when a mobster asks him to use the kitchen to conduct a murder. The fictional story is a testament to Bourdain’s fascination with crime and mayhem, and includes his own autobiographical cues from his life in the restaurant industry.