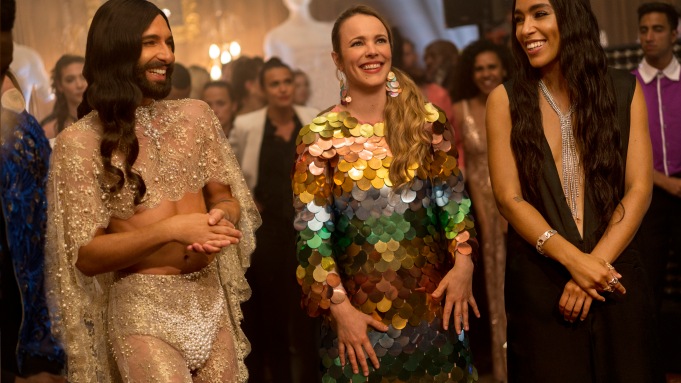 Netflix’s “Eurovision Song Contest: The Story of Fire Saga” debuted with songs about volcanoes and lions and celebrity-filled scenes with Will Ferrell, Rachel McAdams, Dan Stevens and even Demi Lovato. However, true Eurovision fans are fanning out over the cameos from the real-life Eurovision winners and contestants.

After showcasing the vocal stylings of the fictional characters, hungry for the international acclaim from the song contest, director David Dobkin turned the lens on the real Eurovision stars for a talent-stuffed “song-along” scene. In the film, Ferrell and McAdams are members of the downtrodden band “Fire Saga.” The two Icelandic singers (named Lars Erickssong and Sigrit Ericksdóttir ) have but one dream: Win the Eurovision song contest. However their talents and funds have always been slightly lacking when competing against the country’s greatest pop star Katiana (Lovato). But with a little luck (and some elven prayers) the duo make it to the main stage and find themselves fully immersed amongst the Eurovision celebrities. It’s here the Netflix film allows the fans of this decades-long contest to revive their love for the greatest performers from Eurovision’s past.

For those of you not in the international know, we’ve wrangled every single Eurovision cameo that appeared during the “Eurovision” movie, along with a few details from their histories on the competition. It’s time to fully embrace the spectacle and glamour that is Bilal Hassani, Conchita Wurst, Jamala and all the other greats who have graced this global stage.