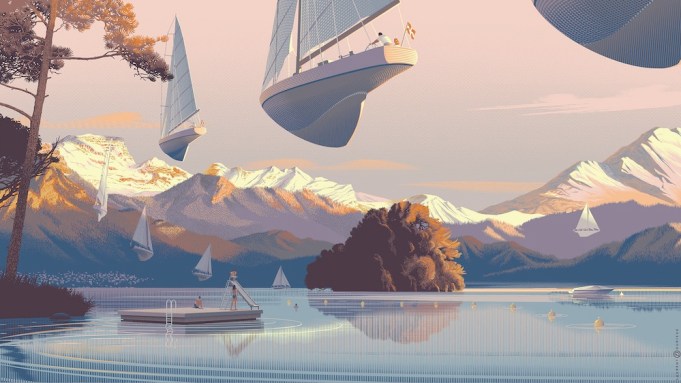 Belgian graphic artist Laurent Durieux has designed some of the most gorgeous movie posters of the past decade, working not for the studios but in custom-published runs just for collectors and fans. You’ve probably seen his work: intricate, finely tooled reimaginings of classic films — “Jaws,” “King Kong” and “Casablanca,” to name a few — produced as limited-edition screenprints by companies such as Mondo, resold on eBay for thousands of dollars.

Durieux’s retrofuturist designs have appeared on everything from bottles of Francis Ford Coppola’s wine to the cover of The New Yorker. This year, he was invited by the Annecy Animation Festival — the world’s top toon showcase, in the south of France, on the banks of Europe’s cleanest lake — to come up with the key art for their 2022 edition (seen above). In the spirit of the festival, the Annecy team brought Durieux’s design to life, so it could be projected before every screening.

Annecy offered the perfect opportunity to speak with Durieux, who was in town for a gallery show, about the stories behind some of his best work.

“I confess that I’m not a huge cinephile,” Durieux admits. “I’m not that guy who rushes out to see every movie. At the same time, I have a huge DVD collection with something like 1,000 Blu-rays at home. I guess you could say, cinema is not my top passion. My top passion is to make a beautiful image.”

Durieux is first and foremost an artist, and though he’s been approached to design original posters for golden-age greats, his visual references are decidedly old school: pulp fiction covers and vintage 1930s travel posters.

“My inspirations come from everywhere but the world of movies,” he says. “They come from 1950s advertising campaigns, especially the great American ones. They come from classic magazine covers, like Fortune magazine in the 1930s and ’40s. Among those artists, there’s one who influenced me most: Antonio Petruccelli.”