Final Oscar Predictions: Who Will Win in the Major Categories? 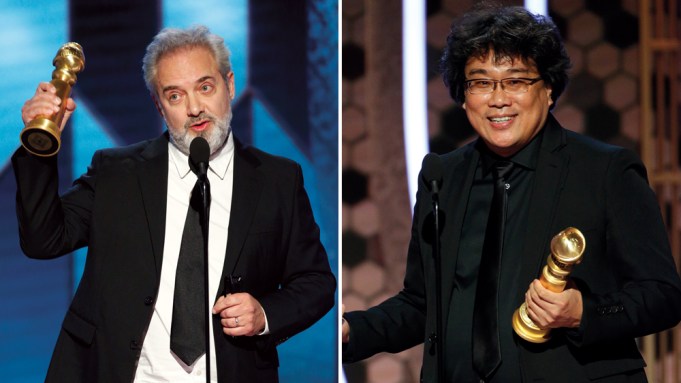 For films like “Joker” and “Marriage Story,” the journey to the Oscars began five months ago with their premieres in Venice. “1917” had the least amount of time on the campaign trail: The Sam Mendes war movie didn’t start screening until late November.

In the end, however, it all comes down to one date: Feb. 9, when the movie industry celebrates its biggest night at the Dolby Theatre in Hollywood.

With that in mind, here are my final predictions for this year’s Oscars.

Lead actress
Renée Zellweger, “Judy”
What is there to say except “Judy” star Renée Zellweger is the front-runner for her heart-wrenching portrayal of Judy Garland during the last months of her
life? There had been talk that Charlize Theron’s transformation into Megyn Kelly for “Bombshell” could be a serious challenge to Zellweger, but it didn’t take long for that chatter to die down. After taking home prizes from major awards shows, including the Golden Globes, the SAG Awards and the British Film Independent Awards, Zellweger will take home her second Oscar.

Lead actor
Joaquin Phoenix, “Joker”
At the beginning of awards season, Adam Driver (“Marriage Story’) appeared to be the favorite to sweep. Many argued “Joker” was too dark for Academy voters. But then came the film’s billion-dollar box office and a Golden Globe and a SAG Award for Joaquin Phoenix’s turn as the clown-faced comic book supervillain. Antonio Banderas (“Pain and Glory”) was a bit of a surprise when he landed an Oscar nomination (not because his performance was anything less than stellar but because the category has been so crowded), and he could turn out to be the major upset of the evening. But with “Joker” going into the night with the most nominations (11), the love and support is too powerful not to land Phoenix his first Oscar.

Supporting actress
Laura Dern, “Marriage Story”
Where in the world is Jennifer Lopez (“Hustlers”)? Just about everyone in Hollywood predicted J.Lo would earn her first Oscar nod for playing a stripper with a twisted business plan to swindle Wall Street suits out of their money. If anyone had a chance of beating Laura Dern (“Marriage Story”), it was Jenny from the block. With Lopez out of the running and a season full of trophies, Dern will scoop up her long overdue Oscar gold.

Supporting actor
Brad Pitt, “Once Upon a Time in Hollywood”
It seems like no one in the category — not even Al Pacino (“The Irishman”) — had a shot at keeping the Oscar out of Brad Pitt’s hands. The “Once Upon a Time in Hollywood” actor sealed his golden fate at the SAG Awards with a surprisingly funny acceptance speech that not only zinged Quentin Tarantino’s foot fetish but also poked fun at himself. “Let’s be honest: It was a difficult part,” Pitt cracked about his role in “Once Upon a Time.” “A guy who gets high, takes his shirt off and doesn’t get on with his wife. It was a big stretch. Big.” And it will be a big night for Pitt at the Oscars.

Director
Bong Joon Ho, “Parasite”
Wasn’t it just yesterday that we thought the race would come down to Martin Scorsese (“The Irishman”) and Quentin Tarantino (“Once Upon a Time in Hollywood”)? Turns out, the directing category is a battle between Bong Joon Ho (“Parasite”) and Sam Mendes (“1917”). This is one of the hardest calls to make. But in the end, I think Bong wins, because even if “Parasite” is named best international film — which it likely will be — voters know the award technically goes to South Korea and not Bong. Giving him the director trophy assures that he wins his own piece of metal.

Best picture
“1917”
Again, it’s between “Parasite” and “1917.” Both deserve the ultimate prize, but expect a repeat of last year, when “Roma” won international (then known as foreign language) and the film’s helmer, Alfonso Cuarón, took director. Throughout awards season, I never heard a peep of criticism about “Parasite.” However, a foreign language film has never won both international and best picture. Besides, war movies have a strong history of earning the evening’s top honor. The roster includes “Platoon,” “The English Patient,” “The Hurt Locker,” “From Here to Eternity” and “Patton” to name just a few. “1917” will more than likely be added to the list on Feb. 9.

International Feature
“Parasite,” South Korea
As I already mentioned above, Bong’s “Parasite” will land South Korea its first Academy Award. Although the Academy never reveals the vote counts, we can assume Pedro Almodóvar’s “Pain and Glory” comes in a close second. The director’s biopic would have easily won if it wasn’t for the juggernaut that is Parasite.

Original song
(I’m Gonna) Love Me Again,” Elton John and Bernie Taupin
The Rocket Man and his longtime collaborator won the Golden Globe for their song from John’s biopic and they’ll likely do the same at the Oscars. Sir Elton was nominated for three songs in 1995 and won for “Can You Feel the Love Tonight.” Only other possibility I see is Kristen Anderson-Lopez and Robert Lopez picking up their third Oscar for “Into the Unknown” from “Frozen 2.” But with the animated movie failing to get a nod for feature, the trail to Oscar gold got a little colder than Disney originally expected.

Documentary Feature
“American Factory”
Steven Bognar and Julia Reichert’s film about a Chinese company using an old car factory in Ohio not only counts Barack and Michelle Obama as producers, but it’s also scooped up kudos at the DGA Awards and the Spirit Awards. It also won the top prize from the Los Angeles Film Critics Association and at the Gotham Awards.