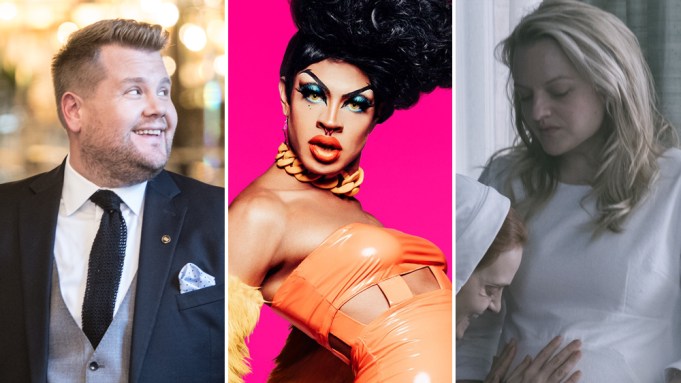 For a show that technically wasn’t eligible at the Emmy Awards in 2019, “The Handmaid’s Tale” did quite well this year. The Hulu drama picked up 11 nominations, including major ones like outstanding directing, writing, guest actress and guest actor, thanks to a quirk in the TV Academy’s Emmy rules.

As previously noted, most of “The Handmaid’s Tale” Season 2 ran during 2018 Emmy eligibility. (The show’s current Season 3, which premiered on June 5, won’t be eligible until 2020). But because three episodes of Season 2 aired outside of last year’s eligibility period, individual achievement awards from those three extra episodes were still eligible this year. And Hulu definitely benefited from that — otherwise, the streamer would have only had nine nominations this year.

Meanwhile, 2019 will go down in Emmy history as a year when several records were broken. “Game of Thrones” posted a new comedy or drama series nomination record with 32, while Lorne Michaels extended his status as the most-nominated individual in history at 88 (adding two more this year). Michaels’ “Saturday Night Live” added 18 more nominations to its grand total tally of 270 lifetime nominations, with “Game of Thrones” in second place at 161.

Here are more oddities and trivia behind this year’s Emmy races:

The Overachievers: But there are two nominees who really stood out on Emmy nomination morning this year. John Mulaney has four nominations in 2019, including guest comedy actor, for hosting “Saturday Night Live,” as well as original music and lyrics (for “Documentary Now”), and writing for a variety series (for both “Documentary Now” and “Saturday Night Live”). And then there’s the hard-working case of James Corden. The “Late Late Show” host boasts five nominations this year, including reality or competition host (“The World’s Best”); short form variety series (“Carpool Karaoke: The Series”); writing for a variety special (“Carpool Karaoke: When Corden Met McCartney Live from Liverpool”); creative achievement in interactive media within an unscripted program (“The Late Late Show Carpool Karaoke Primetime Special 2019”); and interactive program (“The Late Late Show with James Corden”).

Fantasy vs. Reality: “The Handmaid’s Tale” episode “Holly” was nominated in the outstanding production design for a narrative contemporary program (one hour or less), where it will go up against series like “Escape at Dannemora,” “Killing Eve” and “Ozark,” instead of the companion “outstanding production design for a narrative period or fantasy program category (where it would have faced off with “Game of Thrones” and “The Man in the High Castle”). Because, sadly, “The Handmaid’s Tale” does not seem the least bit like fantasy in this day and age.

Also, what makes a show “contemporary” vs. “period”? “Escape at Dannemora,” which chronicles a real-life 2015 event, is still recent enough to be considered “contemporary.” But “Chernobyl,” about the 1986 disaster, is far enough away to be deemed “period.”

Salve for the Cancellation Sting: Among the axed shows still nominated for Emmys: Hulu’s “I Love You, America with Sarah Silverman,” which was nominated for outstanding variety sketch series, and Fox’s “Rel,” nominated four multi-camera cinematography.

Media Mogul Megan Anram: For the second year in a row, writer Megan Anram’s short-form series “An Emmy for Megan,” which parodies the Emmy campaign process, landed two nominations. That means her website boasts a bigger Emmy haul than networks like TNT, Lifetime, TLC and Bravo. It also means Anram managed to squeak in despite a rule change that insiders believe was inspired by “An Emmy for Megan.” This year the Academy put a tighter leash on what might be eligible for short form awards adopting a “new vetting procedure to identify Emmy-competitive entries in the Short Form categories on nomination-round ballots. Panelists, randomly selected from a member pool, will evaluate these entries.”

‘Fyre’ on Fire: In the battle of the competing Fyre Festival documentaries, Hulu may have gotten its program up first, but Netflix won the Emmy nomination battle. Netflix’s “FYRE: The Greatest Party That Never Happened,” was nominated for four Emmys, including outstanding documentary or nonfiction special (plus nods for directing, sound editing and sound mixing). Hulu’s “Fyre Fraud” just landed one nomination, in outstanding writing for a nonfiction program. That means the two Fyre docs won’t be competing against each other anywhere.

The “Game of Thrones” Effect: While HBO celebrates its biggest Emmy haul in history, and “Game of Thrones” pulls off the most nominations for a series in a single year ever (32), the reach extends beyond that. “Game of Thrones: The Last Watch” was also nominated, four outstanding music composition for a documentary series or special (original dramatic score). And then Funny or Die also got a taste, landing another outstanding short form variety series nomination for its recap series “Gay of Thrones.”

Another Apple and Netflix Disruption: They’re not content with competing in the program game. Both Apple (which launches its streaming content service later this year) and Netflix were among the brands whose ad spots were nominated for outstanding commercial this year. Netflix’s “A Great Day in Hollywood” image spot, which premiered in 2018 during the BET Awards, came from director Lacey Duke and spotlighted black artists who work for the streamer. Kamp Grizzly was the ad agency and Pretty Bird the production company for the spot. Apple, via its TBWA/Media Arts Lab ad agency, had two nominations: “Behind the Mac — Make Something Wonderful” and “Shot on iPhone XS — Don’t Mess With Mother.”

Modern History: The outstanding period costumes category focused entirely on the 20th century this year, including mid-century (“Fosse/Verdon” and “The Marvelous Mrs. Maisel”) and the 1980s (“Chernobyl,” “GLOW” and “Pose”).

Stars, They Write and Direct Like Us: Among this year’s outstanding directing contenders are nominees who happen to also be the stars of the programs they helmed: Bill Hader (“Barry”), Jason Bateman (“Ozark”), Derek Waters (“Drunk History”), Sacha Baron Cohen (“Who Is America?”) and Beyonce Knowles-Carter (“Homecoming: A Film by Beyonce”). In the outstanding writing categories, that includes Hader, Phoebe Waller-Bridge (“Fleabag”), Maya Erskine and Anna Konkle (“Pen15”) and Natasha Lyonne (“Russian Doll”).

Wait, What Is This Category, Again?: The Outstanding Interactive Program category seems more like a secondary outstanding variety/talk competition this year, given the nominees: “Conan,” “The Daily Show with Trevor Noah,” “Last Week Tonight with John Oliver,” “The Late Late Show with James Corden” and “The Late Show with Stephen Colbert.” The only non-talker in the category? YouTube’s “NASA and SpaceX: The Interactive Demo-1 Launch.”

Battle of the Substance-Abuse Songs: Among the contenders in this year’s outstanding original music and lyrics category, “Crazy Ex-Girlfriend’s” tune “Antidepressants Are So Not a Big Deal” will battle it out with the “Documentary Now!” song “Holiday Party (I Did A Little Cocaine Tonight).”

One of These Characters Is Not Like the Others: In the outstanding lead actor in a limited series or movie race, only “True Detective” star Mahershala Ali is playing a fictional character. The category’s other nominees all depict real-life people: Jared Harris (as Valery Legasov in “Chernobyl), Benicio del Toro (Richard Matt in “Escape at Dannemora), Sam Rockwell (Bob Fosse in “Fosse/Verdon”), Hugh Grant (Jeremy Thorpe in “A Very English Scandal”) and Jharrel Jerome (Korey Wise in “When They See Us”). Similarly on the outstanding lead actress side, only “Sharp Objects” star Amy Adams plays a fictional character, and is up against Joey King (Gypsy Rose Blanchard in “The Act”), Patricia Arquette (Joyce “Tilly” Mitchell in “Escape at Dannemora”), Michelle Williams (Gwen Verdon in “Fosse/Verdon”), Aunjanue Ellis (Sharon Salaam in “When They See Us”) and Niecy Nash (Delores Wise in “When They See Us”). Arquette, of course, wins for being nominated as two different real-life people, having also scored a supporting actress in a limited series or movie nomination for playing Dee Dee Blanchard in “The Act.”

From Cast to Guest to Emmy Nomination: Michael McKean (“Better Call Saul”) and Ron Cephas Jones (“This Is Us”) were no longer full-time cast members on their respective series after their characters died. They were able to return via flashbacks, however — and those guest turns earned each actor a nomination this year as outstanding guest actor in a drama. On the guest actress in a drama series side, Carice van Houten was able to turn her minimal screen time as Melisandre into a guest actress nomination, while former “Orange is the New Black” cast member Laverne Cox was also able to convert her return into a nod.

Politics Pays: Jimmy Fallon’s portrayal of Democratic presidential contender Beto O’Rourke, in the short “Beto Breaks the Internet,” earned the “Tonight Show” host a nomination for outstanding actor in a short form comedy or drama series. Robert De Niro’s cameo as Robert Mueller on “Saturday Night Live” earned him a guest actor in a comedy nomination. And the “RuPaul’s Drag Race” episode “Trump: The Rusical” earned several nods including, believe it or not, outstanding hairstyling for a multi-camera series or special.

Charles in Charge: “RuPaul’s Drag Race” host RuPaul Charles has won the outstanding host for a reality or competition program Emmy for three years in a row, and he’s now nominated for a potential fourth. But there’s something missing this time out: The host was just submitted this year as “RuPaul,” his long-running stage name, dropping the “Charles.”

Live on Tape: Yes, Fox’s “Rent” is still nominated in the outstanding variety special (live) category, where it’s up against the Golden Globes, Oscars, Grammys, Tonys, and “Live in Front of a Studio Audience,” even though we all know technically the event’s pre-taped dress rehearsal was shown, due to an injury sustained by star Brennin Hunt. Portions of the special were still live, and that was good enough for the Academy.

Narrow Definition of “Reality”: The Academy is often criticized for allowing extensions of primetime series to dominate the short form categories, but the trend is especially egregious in the outstanding short form nonfiction or reality series category. All five nominees are about bigger shows on linear networks: “Creating Saturday Night Live,” “Fosse/Verdon (Inside Look),” “Pose: Identity, Family, Community (Inside Look),” “RuPaul’s Drag Race: Out of the Closet” and “RuPaul’s Drag Race: Portrait of a Queen.” Is this the Emmys or the Promax marketing awards?

Posthumous Mention: A year after his death, Anthony Bourdain continues to be recognized by Academy voters. His CNN series “Anthony Bourdain Parts Unknown” landed six nominations, including informational series or special. Bourdain himself also earned a nod in the nonfiction program writing category.