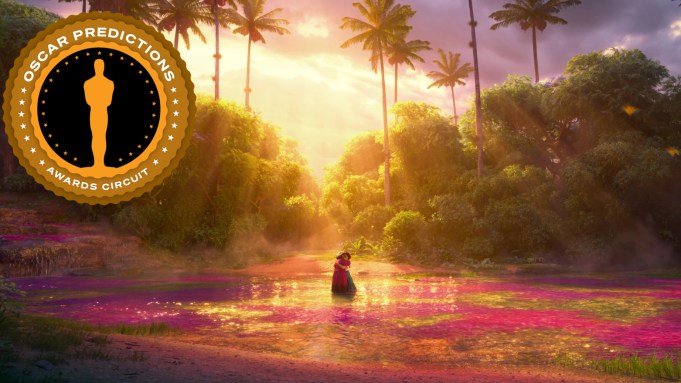 Many potential records could be broken in the original song race, along with enormous opportunities for a ratings boost of the broadcast. It’s also the category with some of the most star power, with Grammy winners Beyoncé, Billie Eilish, Finneas and Reba McEntire in the running.

The category could also make Lin-Manuel Miranda the latest EGOT recipient – he would be the third-youngest in history and the fastest to achieve the rare honor. The sensation surrounding “Bruno” is undeniable – though it’s “Dos Oruguitas” that has the nomination — and “Encanto” has had a palpable surge in the last few weeks. “Encanto” is the 10th animated film since 1989 nominated for both original song and original score (by Germaine Franco). Seven of them walked away with one of the two categories on Oscar night, and five of those seven won both categories.

In addition, “Dos Oruguitas” has the advantage of being the only of the nominated songs that plays within the film — the others are either opening or post-credit songs. Plus, the song marks the moment in the film that makes many of its admirers dissolve into a puddle of emotions. The Academy has rewarded Spanish songs before with Jorge Drexler’s “Al Otro Lado Del Rio” from “The Motorcycle Diaries” (2004), which shockingly bested two animated film songs (“The Polar Express” and “Shrek 2”) and a musical (“The Phantom of the Opera”).

“No Time to Die” has already won multiple accolades this awards season, including the Golden Globe and Critics Choice Awards and last year’s Grammy Award for record of the year and song written for visual media. If 20-year-old Eilish wins, she would be the second-youngest winner in the category’s history, surpassing last year’s winner H.E.R. (for “Fight for You” from “Judas and the Black Messiah”), who was 23 at the time. The youngest is Marketa Irglova, the Czech-Icelandic songwriter who co-wrote “Falling Slowly” from the musical “Once” (2007), who was 19 at the time of her win.

Diane Warren hopes to finally win a long-overdue statuette after 13 nominations with her song “Somehow You Do” from Vertical Entertainment’s “Four Good Days.” Still, once again, the names of the songwriters and artisans are not listed on the voting ballots, so many may not be aware that she’s up for an award yet again.

The Oscars have announced the musical performers for this year’s nominees for best original song, which will include four of the five nominated songs being performed in addition to one that wasn’t submitted: “We Don’t Talk About Bruno” from “Encanto” which is still topping the charts. Van Morrison, who penned and sang “Down to Joy” from “Belfast,” was invited but will not attend the ceremony due to his tour schedule.

Should win: “Be Alive” from “King Richard” (Warner Bros) – Music and lyric by Dixson and Beyoncé Knowles-Carter

Should have been here: “We Don’t Talk About Bruno” from “Encanto” (Walt Disney Pictures) – Music and lyric by Lin-Manuel Miranda

The Academy Awards, better known as the Oscars, is Hollywood’s most prestigious artistic award in the film industry. The most awarded films in Oscar history are “Ben-Hur,” “Titanic” and “The Lord of the Rings: The Return of the King” at 11 statuettes. The most nominated films in Academy history are “All About Eve,” “Titanic” and “La La Land” at 14. “La La Land” is the only film of the three to have lost best picture.