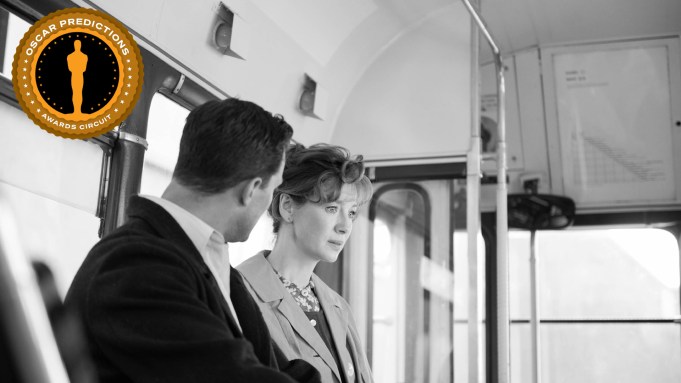 Paul Thomas Anderson is up to a whopping 11 career Oscar nominations with his three noms for “Licorice Pizza” in best picture, directing and original screenplay. Kenneth Branagh duplicated those exact mentions for his film “Belfast,” which had the British filmmaker making history as the first person to be nominated in seven different Oscar categories. He has eight total noms in his career, with no win yet.

Personal filmmaking is always an added touch. Writer, director and producer Kenneth Branagh is a beloved and respected figure in Hollywood, proven by five previous nominations before this year. He is now the first person to be nominated in seven separate categories.

It could go down the route of “Spotlight,” which only won best picture and original screenplay. Or, to create even more chaos, “Belfast” could go down the path of “The Broadway Melody” (1929), “Grand Hotel” (1932) and “Mutiny on the Bounty” (1935) — three films that won only best picture in their respective years. If the anti-streamer bias is still relevant, then the Focus Features-backed film is the leading contender to take home the prize of the lot.

The “Don’t Look Up” win at the Writers Guild of America for original screenplay was a breath of fresh air to its campaign, showing that it can still win that prize.

Many awards enthusiasts are attempting to play out an “everyone wins” scenario on Oscar night that would have Anderson, Branagh and Jane Campion (“The Power of the Dog”) all going home with statues in hand. Many tried this with the crop from 2014, finding ways to give Alejandro G. Iñárritu (“Birdman”), Wes Anderson (“The Grand Budapest Hotel”) and Richard Linklater (“Boyhood”) one win each. In the end, Iñárritu took home three, while the others took home none.

BAFTA went with “Licorice Pizza,” which was a bit of a surprise while Critics Choice went with “Belfast.” The Writers Guild of America Awards threw a curveball with “Don’t Look Up,” which may have put the ball in Branagh’s court to win it all.

The Academy Awards, better known as the Oscars, is Hollywood’s most prestigious artistic award in the film industry. The most awarded films in Oscar history are “Ben-Hur,” “Titanic” and “The Lord of the Rings: The Return of the King” at 11 statuettes. The most nominated films in Academy history are “All About Eve,” “Titanic” and “La La Land” at 14. “La La Land” is the only film of the three to have lost best picture. The most significant Oscar “losers,” meaning most nominated and walk away with zero awards, are 1977’s “The Turning Point” and 1985’s “The Color Purple” at 11 each. Woody Allen has the most wins in original screenplay with three and nominations at 16. Charles Brackett, Paddy Chayefsky, Quentin Tarantino and Billy Wilder won twice. Federico Fellini is the second most nominated writer with six nominations. The most recent winner is Emerald Fennell for “Promising Young Woman.”