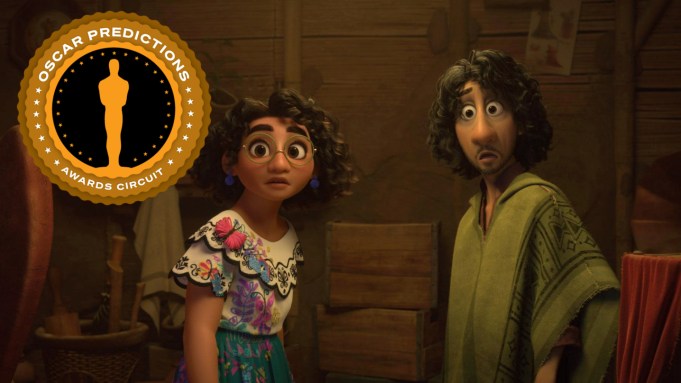 The album for “Encanto” has spent fifth weeks at No. 1 on the Billboard charts and is one of six soundtracks to have clocked at least five weeks in the top spot in the last three decades, and the most since “Frozen” (2013). In addition, the hit song “We Don’t Talk About Bruno” is topping the top 40 songs chart, along with other tracks appearing – “The Family Madrigal,” “Surface Pressure” and “What Else Can I Do?” and the Oscar-nominated “Dos Oruguitas.”

It’s not a foregone conclusion for “Encanto” in this category though with the history-making “Flee” and the critical darling “The Mitchells vs. The Machines” offering up viable alternatives to be recognized.

Distributed by Netflix, “Mitchells” has won the most precursor prizes with over 25 trophies this season. The film received critical acclaim for its stunning animation and hilarious storytelling and the performances of its voice actors and themes surrounding LGBTQ representation. It also won Critics Choice and the Annie Awards.

From Neon, Jonas Poher Rasmussen’s animated documentary that’s representing Denmark made history with three noms in its respective categories. Does it gain support to win in one of them?

“Luca” and the Annie Award leader “Raya and the Last Dragon” have supporters but seem too far behind to catch up.

The Academy Awards, better known as the Oscars, is Hollywood’s most prestigious artistic award in the film industry. The most awarded films in Oscar history are “Ben-Hur,” “Titanic” and “The Lord of the Rings: The Return of the King” at 11 statuettes. The most nominated films in Academy history are “All About Eve,” “Titanic” and “La La Land” at 14. “La La Land” is the only film of the three to have lost best picture. The most prominent Oscar “losers,” meaning most nominated and walk away with zero awards, are 1977’s “The Turning Point” and 1985’s “The Color Purple” at 11 each. The animated feature category was introduced in 2001 when “Shrek” was the first awarded. Five animators have won this award twice: Brad Bird, Pete Docter, Jonas Rivera, Andrew Stanton and Lee Unkrich. Bird and Docter are also among the most nominated, with Ron Clements, Dean DeBlois, Travis Knight, Hayao Miyazaki, Rich Moore, and Chris Sanders.