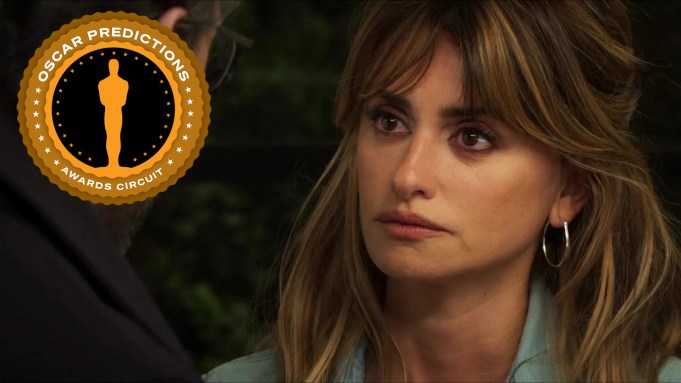 For the second year in a row, the best actress race will be a nail-biter.

Despite a wide-open race, only Jessica Chastain’s work in “The Eyes of Tammy Faye” has won more than one statuette at a televised ceremony – Critics Choice and SAG – so any of the five women (in theory) can win this award.

AMPAS houses nearly 10,000 industry professionals worldwide, and it’s almost impossible to reach them all and gauge their tastes or know who they ultimately voted for. But based on a small sampling of voters, this awards race isn’t “easy” to predict.

Based on that small sampling, the race has narrowed down to Chastain and, believe it or not, Penélope Cruz for “Parallel Mothers.” This does not entirely dismiss an outcome in which Olivia Colman for “The Lost Daughter,” Nicole Kidman for “Being the Ricardos” or Kristen Stewart for “Spencer” can win. However, all of the women have varying levels of support.

Stewart’s hurdle is being the only nomination for her movie. However, if enough voters gave it the time to watch, especially in the artisan categories, she could have the support of more than 60% of the Academy.

Kidman, a previous Oscar winner for “The Hours” (2002), is walking into the ceremony with a Golden Globe win for lead actress drama. But despite “Being the Ricardos” landing an impressive three acting noms (without any others, the first since “The Master” to achieve this feat) – the buzz has subsided. There doesn’t seem to be a rallying cry to give her another statuette at this time.

When it comes to Colman and Cruz, they appeal greatly to the international demographic of the Academy. Colman hasn’t been on the campaign trail, but that doesn’t necessarily hurt her winning chances since she did the same thing with “The Favourite” (2018) and managed to upset the presumptive locked-up best actress winner Glenn Close for “The Wife.” And that also came with Colman’s film losing nine of its 10 nominations.

With “The Lost Daughter,” it’s a bit more challenging. The film has respect for its debut direction by Maggie Gyllenhaal, and it even managed to pull in an additional nom for Jessie Buckley in supporting actress. However, it leaves many people feeling “cold” by the end, as opposed to other competitors whose films have “happier” demeanors.

Cruz, who won the Oscar for “Vicky Cristina Barcelona” (2008), is walking into the ceremony without a single nomination from any televised awards ceremonies. In 27 years of the four awards shows existing, only Marcia Gay Harden for “Pollock” (2000) has been able to win without a mention at any of them. Harden’s run that year for Ed Harris’ directorial debut (coincidentally Colman’s co-star in “The Lost Daughter”) only included a win at the New York Film Critics Circle.

“Parallel Mothers” from Oscar winner Pedro Almodóvar seemed to be a movie that voters watched late in the game, which could explain its poor showing on the BAFTA longlist, where it only was shortlisted for original screenplay and international feature. Nevertheless, Cruz has two prestigious prizes from Los Angeles Film Critics and the National Society of Film Critics in the pocket. A win for her would be unprecedented for a leading actor — but this year, where stats continue to crash and burn, it makes perfect sense.

Should have been here: Tessa Thompson, “Passing” (Netflix)

The Academy Awards, better known as the Oscars, is Hollywood’s most prestigious artistic award in the film industry. The most awarded films in Oscar history are “Ben-Hur,” “Titanic” and “The Lord of the Rings: The Return of the King” at 11 statuettes. The most nominated films in Academy history are “All About Eve,” “Titanic” and “La La Land” at 14. “La La Land” is the only film of the three to have lost best picture. The most prominent Oscar “losers,” meaning most nominated and walk away with zero awards, are 1977’s “The Turning Point” and 1985’s “The Color Purple” at 11 each. Katharine Hepburn has the most awards in this category with four.

In contrast, 13 women have won two each – Ingrid Bergman, Bette Davis, Sally Field, Jane Fonda, Jodie Foster, Olivia de Havilland, Glenda Jackson, Vivien Leigh, Frances McDormand, Luise Rainer, Meryl Streep, Hilary Swank and Elizabeth Taylor. Streep has the most nominations in this category with 17, Hepburn has 12, and Davis has 10. The oldest winner is Jessica Tandy at 80 for “Driving Miss Daisy,” The oldest nominee is Emmanuelle Riva at 85 for “Amour.” The youngest winner at 21 is Marlee Matlin (“Children of a Lesser God”), and the youngest nominee at 9 is Quvenzhané Wallis (“Beasts of the Southern Wild”).