Emmy Predictions: Supporting Actress in a Limited Series or TV Movie – Can Any ‘Hamilton’ Women Pick Up a Statue? 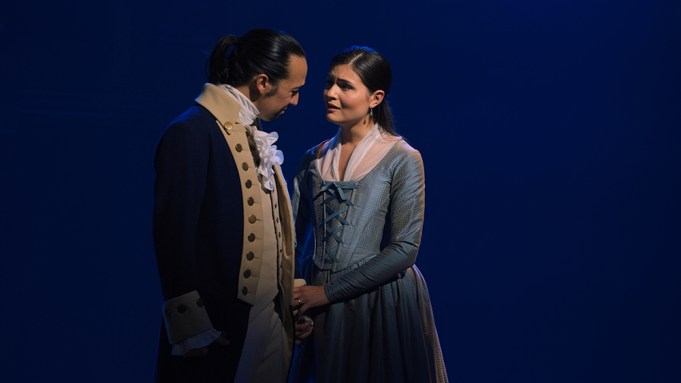 AWARDS PREDICTION COMMENTARY: HBO’s limited series “Mare of Easttown” was one of the most satisfying whodunnits of the past few years, and a big part of that was Julianne Nicholson’s performance. After years of memorable but awards-snubbed turns in shows from “Boardwalk Empire” to “Masters of Sex,” she could finally be on her way to her first Emmy. (Whether she splits votes with co-star Jean Smart might make the difference.) Naturally, she submitted the finale episode, “Sacrament,” in which she has the most emotional and revealing work.

Jean Smart has the benefit of being double nominated this year and is a front-runner in her other category (lead comedy actress for “Hacks”). A true chameleon, her role in the HBO limited series “Mare of Easttown” made her almost unrecognizable to some. She had standout moments all throughout the crime drama as the titular Mare’s mother, but she chose to submit the finale episode for Emmy consideration. It was a much bigger episode for her co-star on this ballot. Add in potential vote-splitting and two wins in September don’t seem as likely for Smart as they did earlier in the summer.

Kathryn Hahn captured the cultural zeitgeist for her scene-stealing turn as Agnes/Agatha Harkness in Disney Plus’ limited series “WandaVision.” She has long been thought of as a likely Emmy nominee, although this is only her second nomination (her first came in 2017 for “Transparent”). But now her career is rising to new heights and her unsurprising submission of the “Breaking the Fourth Wall” episode — which includes the nominated tune, “It Was Agatha All Along” — will make her difficult to beat.

Renée Elise Goldsberry was snubbed in her role as lead comedy actress on “Girls5eva,” but she still scored here for her theatrical masterclass as Angelica Schuyler in Lin-Manuel Miranda’s musical. She won a Tony and a Grammy for this title previously and would be three-fourths of the way to EGOT status if she also picks up this Emmy. Despite the dozen nominations this project picked up overall, there may be a number of dissenters who believe the tuner shouldn’t be at the Emmys, and that will affect final votes.

Phillipa Soo’s performance as Alexander Hamilton’s wife, Eliza, is sensitive and touching, but she never earned a Tony for it. There she submitted in the lead category, but making the switch to supporting at the Emmys made a big difference. Now she is finally getting the recognition she deserves. Also making a great impact her emotional performance of the show’s final number, “Who Live, Who Dies, Who Tells Your Story?” Soo’s nomination marks a significant increase in AAPI representation on these ballots, something else that is overdue.

Moses Ingram’s nomination came as a shock on Emmy morning because she made this ballot over co-star Marielle Heller. Her submission is the finale episode, “End Game,” which offers some of the less gloomy points of the series. It’ll be far too arduous of a task for her to overcome her nominated counterparts, but she should carry momentum from this nom into Oscar season. (She has a role in Joel Coen’s upcoming “The Tragedy of Macbeth.”)

For wins: The rules for this category has changed many times over the years, but as it stands, five women have won this category twice - Jane Alexander, Judy Davis, Colleen Dewhurst, Regina King and Mare Winningham. King is the only person to win her two awards consecutively.