Continue to Variety SKIP AD
You will be redirected back to your article in seconds
May 30, 2021 12:03am PT 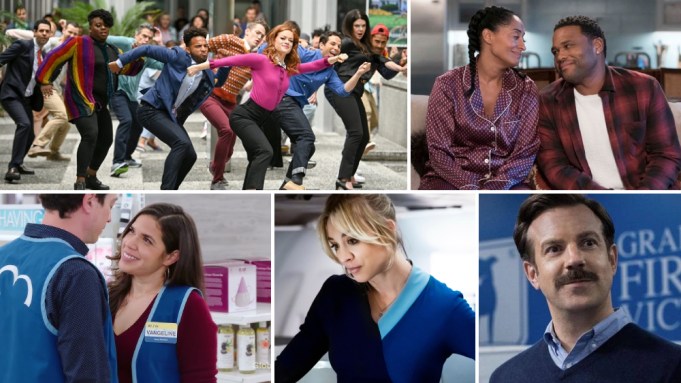 AWARDS PREDICTION COMMENTARY: Probably just a simple math solution…if “Ted Lasso” is set to dominate the Emmys, and plenty of consumers (and voters) are taking in the streaming platform to discover it, wouldn’t they look to see what else Apple TV Plus could offer? Why not the series behind the beloved “It’s Always Sunny in Philadelphia?” “Mythic Quest” could make some noise this season, and it may be something very few pundits can see coming.

The Chuck Lorre created “The Kominsky Method,” bids farewell in its third season but represented the establishment arm of the TV Academy that has gobbled this up in its two previous years. Another late entry drop, this may be Netflix’s best shot at a comedy nod with star Michael Douglas and Kathleen Turner to steer the ship.

Added to a longlist of beloved comedy programs, “Superstore” has had its aficionados for its six-season run. The staff of The Cloud 9 Superstore has put more than their humor and hard work into its outstanding customer (audience) service, pouring their souls into building a memorable experience for people to revisit for years to come. With a chance to recognize its diverse cast as well (Nico Santos, please), maybe this could be a “Good Place” kind of sendoff at the Emmys.

Not that many musicals drop on television, but the Emmys go for them very seldom as “Glee” (season two) was their last recognition back in 2011. However, “Zoey’s Extraordinary Playlist,” which follows the tender singing of Zoey Clarke played vividly by Jane Levy could have a lane all to itself and carve its own pathway to a nod.

The eligibility period ends on May 31 before nomination-round voting begins on June 17, concluding on June 28. The Primetime Emmy nominations will be announced on July 13, 2021.

AND THE PREDICTED NOMINEES ARE:

NEXT IN LINE CONTENDERS:

The Primetime Emmy Awards, better known simply as the Emmys, is television’s most prestigious artistic award. There are many records held for both wins and nominations in the near eight decades.

For wins: NBC’s “Frasier” and ABC’s “Modern Family” hold the record for the most awards in best comedy series, both of which won five times consecutively. The classic sitcoms “All in the Family” and “Cheers” both have four wins, although not consecutive.

For nominations: The shows that have been nominated in this category the most are “Cheers” and “M*A*S*H,” both with 11 over their runs. The former winning four and the latter once. “Curb Your Enthusiasm” is the most nominated show in this category with nine but has not won (as of 2021).

NBC is the network with the most wins in this category, with 26, with CBS following with 22. Amazon Prime Video is the first and only streaming service to win this category with “The Marvelous Mrs. Maisel” (in 2018) and “Fleabag” (in 2019).