Lady Gaga in ‘Wednesday’ Season 2? Jenna Ortega Is Hopeful: ‘I’m Sure Netflix Would Love That’ 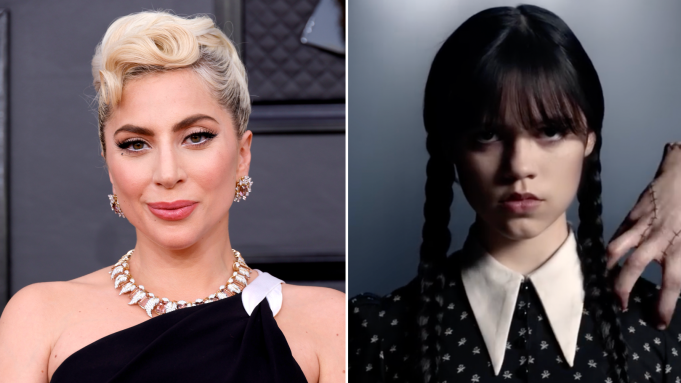 Lady Gaga’s “Bloody Mary” recently made its debut on the Billboard Hot 100 chart thanks to a boom in popularity because of Netflix’s “Wednesday.” But what about getting Gaga to star in the second season of the streamer’s Addams Family smash hit? “I’m sure Netflix would love that,” leading star Jenna Ortega told Variety during the Official Digital Pre-Show for the Golden Globes.

A dance scene featured in “Wednesday” Episode 4 exploded on TikTok once it got remixed to Gaga’s “Bloody Mary.” Millions of TikTok users re-created Ortega’s trademark dance and set it to Gaga’s song. In the show, the scene is set to “Goo Goo Muck” by The Cramps. The TikTok trend boosted the popularity of Gaga’s “Bloody Mary” so much that Gaga herself recreated Ortega’s dance on the social media platform.

“It’s really strange,” Ortega said about Gaga getting in on the “Wednesday” TikTok craze. “You know what’s funny? A long time ago I worked with a hairdresser that worked with Gaga and I just had seen Gaga in concert a few years before. [The hairdresser got] Gaga [to make] me a video saying she heard I was a fan. Gaga made me a sweet video. I doubt she remembers. But to see her to do that now…it’s one of those moments you realize life changes really fast.”

What role should Gaga play in “Wednesday” Season 2? Ortega said it would have to be similar to the relationship between Wednesday and Miss Thornhill (Christina Ricci), adding, “If Lady Gaga were to be a part of it, they’d have to be two monsters who understand each other.”

Ortega said she’s had “no contact” with Gaga otherwise. As for Season 2, Ortega could only say this: “I have seen nothing and I know nothing. As the actor you’re told what to do. I’m waiting on it! I think they’re just starting to get a writers room together so we’ll see.”

The eight-episode first season of “Wednesday” debuted Nov. 23 on Netflix and set a new platform record for most hours viewed for an English language series in its first week with over 341 million hours. Since then, the show has grown to become the second biggest English language season of television on Netflix with over 1.2 billion hours viewed within its first 28 days, among other streaming series records.