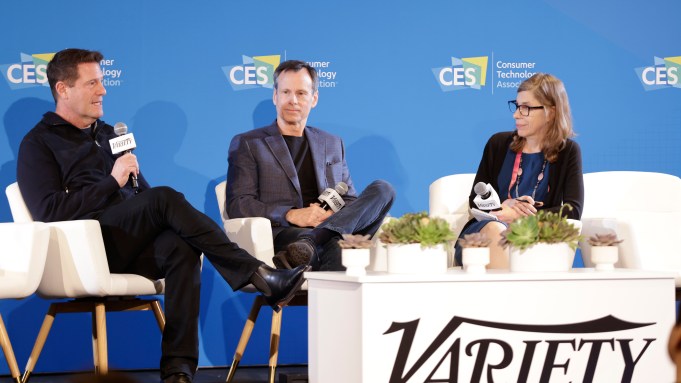 Former Disney execs Kevin Mayer and Tom Staggs have made 10 acquisitions, beginning with Reese Witherspoon’s Hello Sunshine, and a minority investment in Will and Jada Pinkett Smith’s Westbrook, since launching their Blackstone-backed media company Candle Media in 2021.

But CEOs Mayer and Staggs told Variety‘s co-editor in chief Cynthia Littleton at Variety’s Entertainment Summit at CES on Friday the success in their strategy is balancing the assets tied to major names with content that punches “above its weight,” like that made by Moonbug Entertainment, which produces smash hit children’s series “CoComelon.”

A consistent presence on Netflix’s weekly Top 10 English-language TV series chart, Staggs described the value of “CoComelon” to Candle Media like this: “On a relative scale, it’s not the most expensive program we have, but it matters, and that’s what we like, we like programming that really matters to distributors,” Staggs said.

Like the purchases of Hello Sunshine, Faraway Road Productions and ATTN:, Mayer and Staggs see Moonbug as a company that’s offering a desired product or unique content to a specific demographic of consumer that can then be monetized in other ways.

“René Rechtman, who founded Moonbug, worked for us at Disney for a long time,” Mayer said. “He came up with an idea while he was there and said, ‘There are audiences that just aren’t coming to the Disney Channel anymore, they’re going to YouTube — and very specifically YouTube. And a lot of parents are parking their kids in front of an iPad and putting on YouTube and they’re finding fabulous content. And this content is wholly original.'”

Enter “CoComelon,” created by Jay Jeon, a father of two in Southern California.

“He was a retired engineer and he, out of a hobby, created ‘CoComelon,'” Mayer said. “It’s a nice 3D animation, not everyone could do it, but he was able to do it, he had a technical background and he made this great animation. And just on his own, he put one one video a month out there as a six-to-eight minute video on his channel and it hit 60 million subscribers after a few years. Then Moonbug buys it, and that was two years ago, and now that 60 million subscribers, because of the techniques that we have at Moonbug to grow viewership and to feed the right content and understand what audiences want, when they want it, and how to populate the channel really well, it’s getting in front of 150 million subscribers. ‘CoComelon’ is the largest in the world YouTube channel, larger than Mr. Beast, which is like 110 million. Larger than anything else. And while he did that, he took those same shows, repackaged them into one-hour episodes, 10 of them, and licensed them to Netflix. They’re also available for free on YouTube. And it was the second-most streamed show on Netflix last year, ‘Criminal Minds’ being the most streamed. So we’ll see what happens this year, but now there are all the licensing and merchandising opportunities.”

Staggs added: “Just recently, late last year, they introduced on YouTube ‘CoComelon Animal Time.’ And after I think four months, it did 2 billion minutes on YouTube in December. So an offshoot of that franchise, continuing to build that ecosystem, if you will. So that’s what we mean when we say finding these things that have real opportunity, then trying to build out the brand.”

Before launching Candle Media with Staggs, Mayer briefly served as CEO at TikTok and COO of its parent company ByteDance. On Friday, he offered some commentary on recent government bans on the China-based app.

“People thought this was a crazy Donald Trump moment, and that’s what accompanied all the frenzy in the summer of 2020 when I was there [as CEO]… It’s been somewhat surprising to me, I thought this was all over with, and in the background, there’s still been these concerns, and now we have a Democratic administration, which is expressing similar, if not stronger concerns,” Mayer said. “I don’t know, I never actually went to our offices in China. This was all during the pandemic, it was all Zoom. I don’t know what the concerns are exactly, I don’t know how real they are. But I do know the concerns have been quite persistent, and it’s gone from Trump to Biden and it hasn’t seemed to have been mitigated much. So I’m not sure what to say about it, I don’t have any particularly great insight on it. I’m just noticing, like everyone else is, there seems to be some substantial concerns.”

Speaking more on their previous gigs, Mayer and Staggs both offered up their opinion on Disney CEO Bob Iger, whom Mayer served under at Disney as an chairman of direct-to-consumer and Staggs worked alongside as CFO and COO, returning to the company after his retirement to take over for its most recent CEO, the ousted Bob Chapek.

“The board obviously reached a point where they decided they had to make a change, and I think both from mine and Kevin’s perspective, because we’re close enough to appreciate Bob Iger and his talent as anyone, that he has a sure set of hands, he understands the company understands the brands — I think that’s a calming influence on the company and a good thing that he’s there,” Staggs said. “But we’re on the outside, so we’re not sitting in the middle.. I know how much I loved it when people were armchair quarterbacking when I was there, so I’m not going to do it, but the fact is, frankly, we still root for Disney, we love Disney and there’s a lot of people there we care about. So we’re happy to see it stabilize and hopefully go in exactly the right direction.”

“You have to keep in mind that the assets when Tom and I were there, and obviously Bob Iger himself, we built a set of assets and brands that are unparalleled in this industry,” Mayer added. “Those assets and brands and franchises and monetization opportunities are still there, just the way they were before. Yes, the landscape has changed somewhat. Yes, we’re in a cyclical downturn. Yes, they had some management turmoil, but Bob Iger’s back, he is a force of nature, both Tom and I can tell you that. He’s an amazing CEO, an amazing guy… He’s going to do great things. He will right the ship and it will be the old Disney that we saw before, it will happen.”

Variety returned with its popular Entertainment Summit at CES in-person this, exploring how new technologies and innovation are steering the future of film, TV, digital media, gaming and more, on Jan. 6 at the Aria in Las Vegas.

The Variety Entertainment Summit at CES topics include the business and creative direction of multi-platform storytelling; Web3 for the entertainment industry; what’s next for the creator economy; cross-generation marketing and the future business outlook for 2023.

Watch Variety’s panel with Staggs and Mayer view the video above.