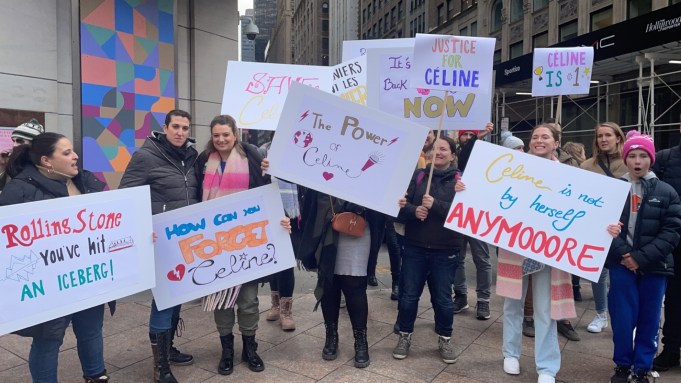 A group of avid Celine Dion fans gathered outside of Rolling Stone’s office to protest her exclusion from the magazine’s viral list of the 200 Greatest Singers of All Time. Part of a fan club called The Redheads on Facebook, around 15 dedicated Celine soldiers rode over six hours from Montreal to New York City. “Rolling Stone you’ve hit an iceberg,” read one of the several signs carried at the crossroads.

Blasting “That’s the Way It Is” from a portable speaker, the group raged at the diva’s omission. Chanting “Justice for Celine,” they lined up outside the offices of the Penske Media Corporation (which also owns Variety) to let the editors know their hearts would not go on after this decision.

The Rolling Stone list, published on Jan. 1, created a frenzy online for its contentious choices, most notably for leaving out the French Canadian pop singer.

“The list is completely illegitimate,” said The Redheads founder Line Basbous, who helped organize the protest. “We wanted to support her and make sure that Rolling Stone hears the voice of the fans. The list is ridiculous. No Madonna, no Celine. They’re clearly focused on American singers and we don’t understand.”

Another Celine super-fan, 31 year-old Charles Lemay, said the group, mainly based in Canada, began organizing the protest as soon as the article was published. “In Quebec, it’s nonsense that she’s not on the list. She’s been in all our lives since the beginning.”

One couple from France ran into the protest on the streets and joined the chants for fun. They heard the group speaking French and decided to pick up a sign. “I don’t really know why we’re here,” one said.

Meanwhile, across the street at the New York Public Library, was a larger political protest denouncing the Jan. 6 insurrection.