Beyoncé Dazzles in Dubai With First Performance in Four Years 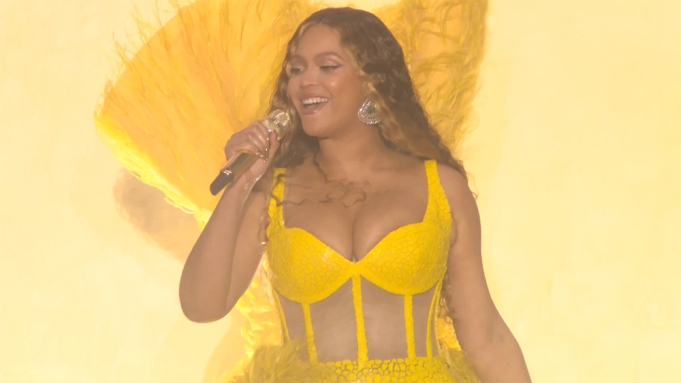 The Queen has returned.

It’s been four years since Beyoncé’s last headlining show, and her performance at the new Atlantis The Royal Resort in Dubai on Saturday night (Jan. 21) was a fittingly grand return.

The star-studded show began Saturday night like a theatrical production. Violinists crowned with metallic gold headpieces and voluminous red skirts hit the stage first, and Beyoncé’s dancers and more musicians followed in matching garb, standing still with their hands folded in front of the Egyptian-themed backdrop.

As guests at the invite-only, hour-long performance started screaming with excitement, Queen Bey raised up on a platform wearing a yellow corseted dress, topped with a feathered skirt and a feathered backpiece.

Fireworks exploded above the venue as the iconic artist opened the show singing Etta James’ “At Last” into a gold microphone. Then, she announced to the crowd that her mom, Tina Knowles, father, Mathew Knowles, her “beautiful husband” Jay-Z and their children, Blue Ivy, Rumi, and Sir Carter were all in the audience to support her.

While Jay-Z stayed in his seat when Beyoncé performed “Crazy in Love” (she started it off with the “50 Shades of Grey” version and wrapped with the original), Blue Ivy hit the stage for a collab.

The 11-year-old continued to prove she’s a star-in-the-making when she strolled out in a red sequined jumpsuit topped with a billowy skirt, and flipped her braids while she walked down to her mom’s side.

As Beyoncé started performing “Brown Skin Girl,” Blue Ivy stood beside her and danced, nailing the choreography that the dancers were doing beside her. When the song ended, she hugged her mom, walked up the steps, and struck a pose, even blowing kisses to the crowd like a pro before she left the stage.

Beyoncé had three different wardrobe changes during the evening. A red corseted jumpsuit topped with a skirt came next and then a sheer crystal-adorned mini-dress to end the show.

Each outfit ushered in a new vibe for the show, which leaned heavy on ballads — like “Freedom,” “Spirit” and “Be Alive.” But Bey spiced up the set with “Beautiful Liar” and “Naughty Girl,” for which she appeared in her final look of the night.

Curiously, Beyoncé didn’t perform any songs from her Grammy-nominated 2022 “Renaissance” album — perhaps she’s saving that for Grammy night on Feb. 5? Variety hears talks with show producers are ongoing for a possible onstage appearance.

To wrap up the show, the superstar singer and her dancers danced and writhed in water as she sang “Naughty Girl”. Then, Beyoncé strutted onto an elevated plank in the middle of a body of water to wrap up the show. She was lifted into the air, and a spectacular fireworks show followed.

Chloe and Halle Bailey, Nia Long, Kendall Jenner, and Rebel Wilson were among stars in attendance. Guests were told to wear formal wear, and had to rock signature pins to access the event.

All attendees also had to adhere to a strict no-phones policy. No one was allowed to take photos or videos of the concert, but they were allowed to do so at the after-party, where Swedish House Mafia performed and guests continued to indulge in the complimentary Moet champagne.

Beyoncé performed with the all-female Firdaus Orchestra, comprising women of 24 nationalities. The orchestra is mentored by Oscar winner A.R. Rahman.

Beyonce’s performance was part of Atlantis Resort’s “Grand Reveal” weekend celebration of the new Atlantis The Royal in Dubai, which is set to open next month. It also included dinners prepared by world-renowned chefs including Jose Andres, Nobu Matsuhisa, Jose Andres, and Mich Turner.