Continue to Variety SKIP AD
You will be redirected back to your article in seconds
Jan 22, 2023 1:52pm PT

‘Fair Play’ Cast on Creating Sundance’s Most Shocking Sex Scene: ‘There Was Too Much Blood at One Point’ 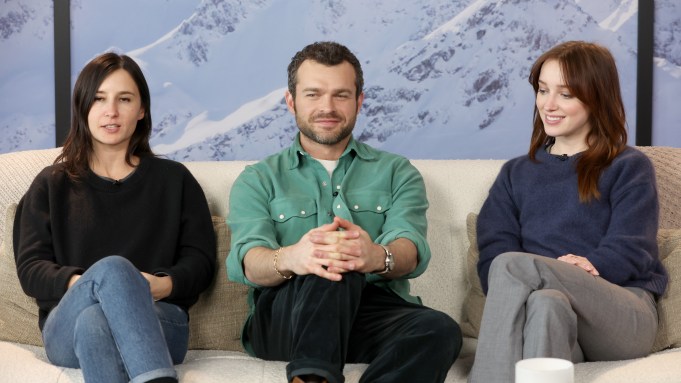 One of the most talked-about scenes at this year’s Sundance Film Festival unfolds in the opening sequence of “Fair Play,” a sexy thriller starring “Bridgerton” breakout Phoebe Dynevor and “Solo” actor Alden Ehrenreich. They play a newly engaged couple who keeps their relationship a secret because they work together at a cut-throat hedge fund.

In the particularly buzzy scene, Dynevor’s character Emily and Ehrenreich’s Luke attend a wedding, where they sneak into the bathroom to get hot and heavy. Without getting too specific (or giving away too much), there’s a sex act that leaves Emily’s chic satin dress covered in blood.

“I loved it,” Dynevor says at the Variety Sundance Studio presented by Audible. “[When I read the script] I was like, ‘Hallelujah.’ I’d never seen a scene like that on film before. It happens. I don’t want to spoil too much, but it was fun to bring to life.”

Ehrenreich knew the shocking incident would play well to the packed house at Park City’s Library Center Theatre, where the film premiered on Friday. “It was a high point of seeing the movie with an audience. Getting to be in the room and [hear] the audience reaction was wonderful.”

Prior to filming the bathroom rendezvous, Dynevor and Ehrenreich thoroughly prepared through the help of an intimacy coordinator. “We had a week of rehearsals before we got onto set,” Dynevor says. “On the day, it felt like we knew what we were doing at that point.”

Still, no amount of practice could prevent one unexpected difficulty during filming, involving an excess of bodily fluid.

“I remember there was too much blood at one point,” Ehrenreich remembers. “It was crazy.”

Dynevor chimed in: “And then there wasn’t enough…”

“Blood continuity was a thing,” director Chloe Domont added with a laugh. “We ended up working it out for the cut of the movie.”

In the moment, the characters of Emily and Luke laugh about the incident. It was intentional, Domont says, to root their reaction in humor rather than embarrassment.

“They’re charmingly dysfunctional and human. You love them because of the messiness and because of how they react. You have to fall in love with these characters during this moment,” Domont says. “How can you do that in the most human way? It’s a combination of love and mess.”

The director wants audiences to fall for the duo’s charming rapport before Emily gets promoted at her high-stakes finance job over Luke — and the couple’s power dynamic shifts irrevocably.

“I thought [finance] was a great backdrop because the high-stakes is ripe for drama,” Domont says. “It feeds into the toxicity of the relationship, and vice-versa.”