Awards Circuit Podcast: Also on this episode, Bill Nighy on "Living." And the Roundtable dissects the Golden Globes winners and SAG Awards noms. 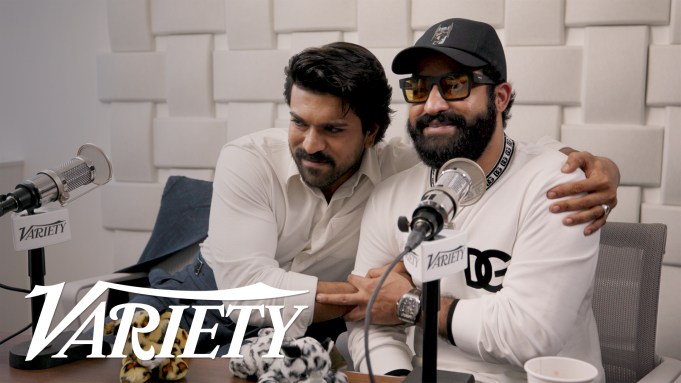 Friends for more than 20 years, “RRR” stars N.T. Rama Rao Jr and Ram Charan say they relied on each another for the extensive shoot of S.S. Rajamouli’s Indian-Tollywood epic, which has taken global cinemas by storm.

On this episode of the Variety Awards Circuit Podcast, the two actors celebrate the phenomenon of “RRR” and discuss the grueling shoot that took over three years. They describe what it was like to be suspended in harnesses, and the experience of learning and synchronize the film’s signature (and now Golden Globe-winning) song “Naatu Naatu.” Listen below:

Despite being snubbed as India’s international feature for the upcoming 2023 Oscars, “RRR” has been a critical favorite, picking up a Golden Globe win for original song. It’s also been nominated for five Critics Choice Awards this year, including best picture. That awards show takes place on Sunday.

A global sensation, the action-musical broke the record for the biggest opening day collectively earned by an Indian film. Spoken in the Telugu language, it represents the first “Tollywood” film to enter and garner major awards recognition stateside.

Also on this episode, veteran actor Bill Nighy sits down to discuss his career and tender performance in “Living,” which has been him in a prime position for his first Oscar nod.

But first, the Awards Circuit Roundtable dissects this year’s Golden Globe winners and the Screen Actors Guild Awards nominations, both of which provided shocking inclusions and omissions.

Variety’s “Awards Circuit” podcast, produced by Michael Schneider, who co-hosts with Clayton Davis, is your one-stop listen for lively conversations about the best in film and television. Each week, “Awards Circuit” features interviews with top film and TV talent and creatives, discussions and debates about awards races, industry headlines and much more. Subscribe via Apple Podcasts, Stitcher, Spotify or anywhere you download podcasts. New episodes post weekly.