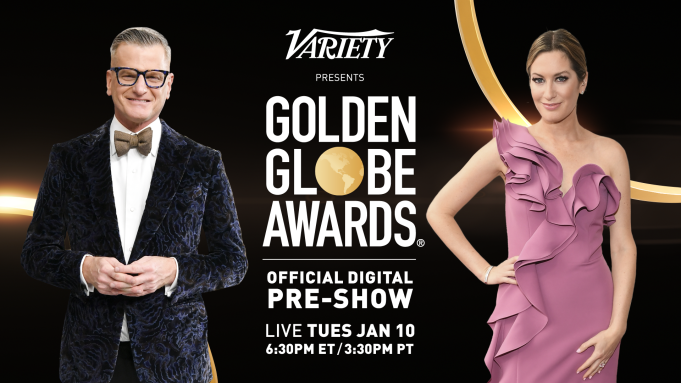 Variety and the Hollywood Foreign Press Association (HFPA) are partnering to produce and stream the official digital pre-show for the 80th Annual Golden Globe Awards.

The red carpet pre-show will stream on Variety.com, its social media platforms plus 20 websites in the PMC portfolio. Variety senior culture and events editor Marc Malkin and chief correspondent Elizabeth Wagmeister will host the gala carpet, interviewing Hollywood’s biggest stars from film and television attending the Golden Globes. The pre-show will air live at 3:30 p.m. PT/ 6:30 p.m. ET and include exclusive footage of the stars’ arrivals on the red carpet, plus conversations with the Golden Globe nominees with Variety editors.

“Variety is coming off a record-breaking year in terms of our traffic and global reach,” said co-editor-in-chief Ramin Setoodeh. “We are excited to be partnering with the Golden Globes on their exclusive digital red carpet pre-show to launch the official start of awards season 2023.”

The pre-show will also air on the Golden Globes website.

Produced by Dick Clark productions and Jesse Collins Entertainment in association with the HFPA, the Golden Globe Awards are viewed in more than 210 territories worldwide. Helen Hoehne is president of the HFPA. Collins and Dionne Harmon will serve as executive producers.