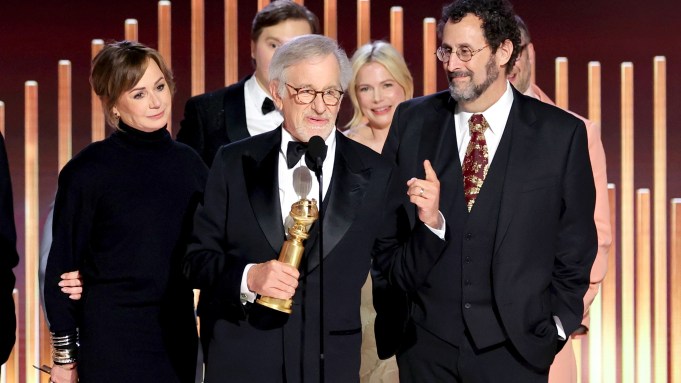 “House of the Dragon” won best TV drama and “Abbott Elementary” received the prize for best TV comedy at the 80th annual Golden Globe Awards on Tuesday. In a marathon telecast from the Beverly Hilton Hotel that stretched over three hours, “The Banshees of Inisherin” scored a best motion picture musical or comedy statue, while “The Fabelmans” was named the best movie drama.

“The White Lotus,” a watercooler hit about the wealthy guests of a high-end hotel, was named best limited or anthology series for its Sicily-set second season. Their victories came as the tarnished awards show attempted to relaunch itself as a star-studded celebration of movies and television after being forced off the air in 2022 in the wake of a series of controversies.

“The Banshees of Inisherin,” a comic look at the dissolution of a friendship, won a leading three prizes, including awards for its screenplay and the lead performance of Colin Farrell. “The Fabelmans,” a warm-hearted look at Steven Spielberg’s childhood, also won a directing prize for the filmmaking icon.

If the evening had a theme, it was one of reinvention and renewal. Several of the winners described themselves as being given golden opportunities after being cut out from or overlooked by a business that failed to appreciate their talents. That included best actress in a motion picture musical or comedy winner Michelle Yeoh, an action star turned an awards season darling with her turn in “Everything Everywhere All at Once,” who talked about the ageism and racism she faced.

“All of you women understand this,” the 60-year-old Yeoh said. “As the days, the years and the numbers get bigger, it seems like opportunities start to get smaller as well.”

It was a theme that was amplified by Farrell, who thanked his “The Banshees of Inisherin” writer and director Martin McDonagh for helping to rechart his career path when he cast him in the 2008 black comedy “In Bruges.” And it was echoed by best supporting actor winner Ke Huy Quan, a former child actor who had stopped acting before he was cast as Yeoh’s husband in “Everything Everywhere All at Once.”

“When I started my career as a child actor in ‘Indiana Jones and the Temple of Doom,’ I felt so very lucky to have been chosen,” Quan said. “As I grew older, I started to wonder if that was it, if that was just luck. For so many years, I was afraid I had nothing more to offer. No matter what I did, I would never surpass what I achieved as a kid. Thankfully, more than 30 years later, two guys thought of me. [Directors Daniel Kwan and Daniel Scheinert] remembered that kid, and they gave me an opportunity to try again.”

There were also several speeches that reached emotional crescendos, such as best supporting actress winner Angela Bassett, honored for her turn as a grieving monarch in “Black Panther: Wakanda Forever.” She used her time on stage to pay tribute to Chadwick Boseman, the actor who rocketed to fame as the king of Wakanda, but whose career was cut short when he died of cancer in 2020 at the age of 43.

“We mourned, we loved, we healed and we were surrounded each and every day by the light and the spirit of Chadwick Boseman,” Bassett said.

For decades, the Globes were an important stop on the awards season gauntlet and, unlike many of the other ceremonies that populate a seemingly endless stretch of the calendar, this one served up a good time. Booze, usually courtesy of a top-shelf sponsor, helped lubricate the evening and the Globes became must-see TV for its irreverent, anything-can-happen approach to handing out statues (multiple winners nearly missed their time at the podium because of ill-timed bathroom breaks).

But in 2021 that changed after the Los Angeles Times published a blockbuster article that revealed that the Hollywood Foreign Press Association, the group behind the telecast, had no Black members. The article also revealed dubious ethical standards at the organization, reporting that voters received lavish gifts from studios and participated in junkets financed by companies looking to curry favor. The HFPA has instituted a series of reforms, including introducing stricter ethical standards, and has expanded its membership with an emphasis on attracting more people of color. The group now has six Black members and roughly a dozen non-member Black voters. Those changes didn’t stop the HFPA from being skewered by its host, Jerrod Carmichael.

“I won’t say they [are] a racist organization,” he added. “But they didn’t have a single Black member until George Floyd died, so do with that information what you will.”

The show that Carmichael presided over celebrated diverse winners and managed to attract A-listers such as Brad Pitt and Lady Gaga (it also may have set a new record for profanity, with Carmichael and winners such as Farrell and Jennifer Coolidge keeping censors busy). Will it be enough? The HFPA was, after all, undergoing an audition of sorts. Amidst the controversy, NBC renegotiated its deal with the Globes as a one-year agreement, “which allows the HFPA and DCP to explore new opportunities for domestic and global distribution across a variety of platforms in the future,” according to a press release that announced the broadcast’s return.

This year’s ceremony unfolded hours after Los Angeles was buffeted by heavy rains and flooding. And it takes place as metaphorical storm clouds have gathered over Hollywood. The entertainment business is still struggling to recover its stride after COVID shuttered movie theaters and upended production. There have been hits, such as “Elvis” and “Top Gun: Maverick,” but several of the movies that won Globes, such as “The Fabelmans” and “Tár,” have struggled at the box office. At the same time, many of the companies behind the evening’s awards hopefuls, such as Amazon, the Walt Disney Company and Netflix have instituted deep layoffs as they brace for a possible recession. Champagne may have flowed freely during the broadcast (“The White Lotus” creator Mike White joked that they served alcohol and no food to mop it up), but anxiety about the future of media was also on the menu.

Eddie Murphy and Ryan Murphy were the recipients of the Cecil B. DeMille Award, recognizing career achievement in movies, and the Carol Burnett Award, honoring career achievement in television, respectively. Ryan Murphy used his speech to recognize openly gay or trans performers he worked with such as MJ Rodriguez, Jeremy Pope, Niecy Nash, and Billy Porter, calling them signs of “hope and progress.”

“Use them as your north stars,” Murphy told viewers who might not see themselves reflected often on screen or who might feel under attack because of their race or sexual orientation.

Eddie Murphy was more irreverent in his time on stage, poking fun at a viral moment from last year’s Oscars, while telling the audience that he followed a simple blueprint for success in the movie business.

“Pay your taxes, mind your business and keep Will Smith’s wife’s name out your fucking mouth,” Eddie Murphy said, referencing the actor’s assault of Chris Rock.

The focus of the evening was on the fantasies and fables being spun on the big and small screen alike, but glimmers of the painful reality being experienced in parts of the world managed to break through the glitz and glamor. Volodymyr Zelenskyy, president of Ukraine, appeared on video to rally viewers to his country’s cause as it continues to be locked in an existential battle with Russia.

“The tide is turning and it is already clear who will win,” Zelensky said to loud applause.

See the winners below.

“Everything Everywhere All at Once” (A24)

Daniel Kwan, Daniel Scheinert (“Everything Everywhere All at Once”)

Martin McDonagh (“The Banshees of Inisherin”)

“Everything Everywhere All at Once” (A24) — Daniel Kwan, Daniel Scheinert

Best Performance by an Actor in a Motion Picture, Drama

Best Performance by an Actress in a Motion Picture, Drama

Best Performance by an Actress in a Motion Picture, Musical or Comedy

Michelle Yeoh (“Everything Everywhere All at Once”) (WINNER)

Best Performance by an Actor in a Motion Picture, Musical or Comedy

Brendan Gleeson (“The Banshees of Inisherin”)

Barry Keoghan (“The Banshees of Inisherin”)

Ke Huy Quan (“Everything Everywhere All at Once”) WINNER

Kerry Condon (“The Banshees of Inisherin”)

Jamie Lee Curtis (“Everything Everywhere All at Once”)

“Only Murders in the Building” (Hulu)

Best Performance by an Actor in a Television Series, Drama

Best Performance by an Actress in a Television Series, Drama

Emma D’Arcy (“House of the Dragon”)

Best Actress in a TV Series, Musical or Comedy

Selena Gomez (“Only Murders in the Building”)

Best Actor in a TV Series, Musical or Comedy

Steve Martin (“Only Murders in the Building”)

Martin Short (“Only Murders in the Building”)

Best Limited Series, Anthology Series or a Motion Picture made for Television

Best Performance by an Actor, Limited Series, Anthology Series or Motion Picture made for Television

Andrew Garfield (“Under the Banner of Heaven”)

Best Performance by an Actress, Limited Series, Anthology Series or a Motion Picture made for Television

Best Performance by an Actress in Supporting Role, Limited Series, Anthology Series or a Motion Picture made for Television

Claire Danes (“Fleishman Is in Trouble”)

Daisy Edgar-Jones (“Under the Banner of Heaven”)

Best Performance by an Actor in Supporting Role, Limited Series, Anthology Series or a Motion Picture made for Television

“All Quiet on the Western Front” (Germany)

“Carolina” from “Where the Crawdads Sing” (Sony Pictures) — Taylor Swift