‘What We Do in the Shadows’ Showrunners on Documentary Rules, the Actors’ Strengths and Baby Colin Robinson 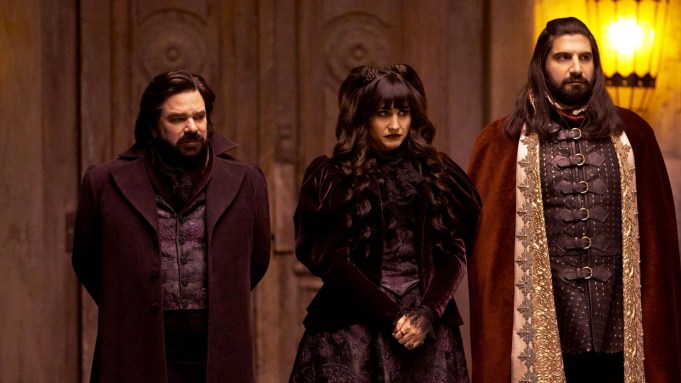 “This is all really fun,” said Stefani Robinson, reflecting back on her career. “Making vampire dick jokes, are you joking me?”

The fourth season of FX’s vampire comedy “What We Do in the Shadows” will premiere on July 12, but before that, showrunners Robinson and Paul Simms delved into the characters’ Season 3 tribulations: Namely, the existential crisis faced by Nandor (Kayvan Novak), and the death and rebirth of energy vampire Colin Robinson (Mark Proksch).

Simms said Colin’s third-season journey began with Stefani Robinson — no relation to Colin that we know of — saying in the writers’ room, “We can’t just have Colin boring people again.”

“And finally we said, ‘Let’s make those questions his own questions.’”

The resulting storyline led to Colin Robinson “dying,” and then being reborn as baby Colin Robinson, with Laszlo (Matt Berry) discovering the infant in the finale. That caretaking arc will continue in Season 4, with Laszlo wondering whether Colin’s destiny is inevitable, or whether he can guide him into not being an energy vampire. “Nature versus nature,” Robinson said.

With the plot arc of Nandor’s season-long ennui, Robinson said: “Being a vampire, you are above it all, and you’ve had every single experience — you’ve become bored with existence because you are able to do anything. How does that affect any mortal creature?”

As Nandor looked for love in all the wrong places, the “idea was him searching for something to fill this hole,” she said.

During the conversation, which was filmed for Variety’s Showrunners Sitdown With Kate Aurthur presented by FX, Robinson and Simms broke down the cast’s strengths, from Berry’s ability to make any line-reading funny, to the fact that Novak reminds Simms of the late Phil Hartman, because he’s “willing to give anything a try — but also is very much about preparing and will do things verbatim,” he said.

They also discussed how “What We Do in the Shadows” adheres to strict documentary rules in how they film the scenes, even during action scenes, or when “it’s frustrating, because there’s sometimes you want a nice and juicy close-up,” Simms said.

Robinson and Simms answered all our questions, and weren’t precious about spoiling a few things about the upcoming season. For instance, they said, yes, audiences will see the Sire and the Baron in Season 4, but no, there won’t be any of Laszlo’s alter ego, Jackie Daytona again. (Though Simms did riff on one hilarious Daytona-related idea they’d discussed, and then scuttled, in the writers’ room.)

The two writers have been with “What We Do in the Shadows” since Season 1, when Jemaine Clement — who with Taika Waititi had co-directed and starred in the 2014 movie that serves as the show’s source material — created it for FX. They also talked about whether the show, which was recently renewed for Seasons 5 and 6, has a natural end point, and agreed that the biggest question they need to resolve is, as Simms put it, “What would happen with Guillermo?”

Oh, and also, Simms’ answer to the question about his biggest career disappointment, and Robinson’s idea about what she still wants to do in her career are hilarious. So watch the video!