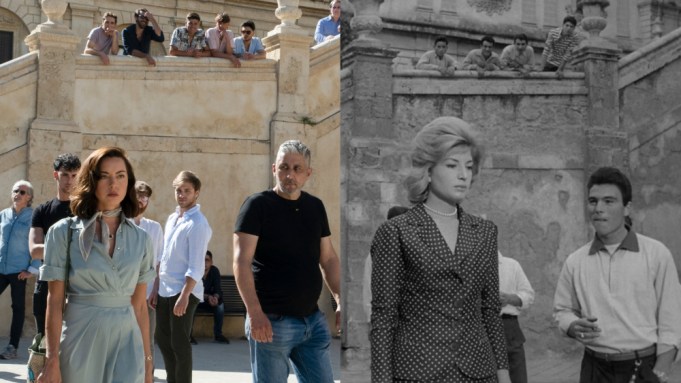 On the third episode of “The White Lotus” Season 2, a group of American tourists visits a location from “The Godfather,” which leads to a multi-generational debate about the patriarchy. (“Men love ‘The Godfather’ because they feel emasculated by modern society,” recent college grad Albie tells his dad and grandfather.) But Francis Ford Coppola’s Oscar-winning classic isn’t the only film referenced in Sunday’s installment.

In fact, a striking moment featuring Aubrey Plaza under the steps of the Noto Cathedral is a shot-by-shot homage to a scene in Michelangelo Antonioni’s 1960 film “L’avventura,” starring Monica Vitti (who was name-dropped by Jennifer Coolidge in last week’s episode). In “L’avventura,” a woman goes missing, and, amidst their search for her, the woman’s lover and best friend strike up a romance. According to “The White Lotus” creator Mike White, “L’avventura” is a “very elliptical, mysterious movie about an existential psychodrama.”

In “L’avventura” and “White Lotus,” respectively, Vitti and Plaza walk around the same courtyard and begin to feel the eyes of a couple dozen ogling men surrounding them. Discussing the scene he mimicked, White tells Variety, “As someone who watched it young, I just was like, ‘Is this what it’s like in Italy? Are the guys like this there?’ They’re so blatant and aggressive with her, and there’s this kind of menace in the air.”

The idea to pay homage to Antonioni’s film came from cinematographer Xavier Grobet, as he and White were shooting in Noto and realized they were standing in the exact location where they filmed “L’avventura.” With Episode 3 referencing that film as well as “The Godfather,” White says he found it fit to paint Sicily as an inspiration for classic cinema, both Italian and American.

The thematic similarities between the two films are also not lost on White, who says, “‘L’avventura’ is about the desperate search for the meaning of life as much as the actual disappeared woman. Obviously, ‘White Lotus’ touches on the malaise of wealthy people and that kind of search for meaning when you’re just lounging by an infinity pool.”

While Season 1 of “Lotus” was shot entirely at the Four Seasons Maui in a COVID bubble, the second season allowed White to expand the series outside of the Italian hotel and into the city. “Sicily is so rich, it felt like it would be a crime to not at least try to expose people to some of the amazing cultural places, these crazy palazzos and Noto as a town,” he says. “There’s so much there to show off.”

Shooting in the streets of Sicily and nearby towns was both a creative choice and a practical one. “At one point we got the boot from the hotel,” he says. “I knew that going in there was going to a be a series of weeks where we needed to shoot but couldn’t shoot at the hotel.”

In order to immerse himself in Southern Italy, the showrunner moved to Sicily for a few months before they began shooting Season 2. White wanted to get a better sense of the city and the areas around it because, he says, “If you go to Italy, you’re not going to just stay at the hotel.”

Below, White answers some of Variety‘s burning questions so far about Season 2 of “The White Lotus.”

How did you integrate Jennifer Coolidge’s character into the new cast and new location? Do you see “White Lotus” as an ongoing anthology with her character returning as the throughline?

Because the seasons are so thematically different, the locations are different, the cast is generally different, it felt like it would make sense to have somebody be the connective tissue between the two seasons. And if we went to Italy without Jennifer, she would be so mad [laughs]. Obviously people loved her, and she’s my friend. So it just made sense that it would be Jennifer. With Jennifer, I was like, “If we went to Italy, what would you want to do?” And it was basically like the scene in this last episode that aired where she was like, “I just want to be on a Vespa with a lot of hot guys in sharp suits, trying to like my cigarette.” So that conversation built out this idea of her wanting to have this ultimate Italian vacation. Tanya is such a fun character to write, and Jennifer is one of the highlights of my experience on this show as well as my career. So I’m definitely open to keep going with Jennifer, if HBO, lets us keep going in general.

Episode 3 ends with Cameron (Theo James) and Ethan (Will Sharpe) partying with Lucia (Simona Tabasco) and Mia (Beatrice Grannò). As this season seems to be primarily focused on sex and sex politics, what conversations do you hope viewers will come away with regarding sex work?

You’ll have to see how the show resolves itself. But any conversation about sex work is fraught and thorny… I’m not trying to be coy, I just don’t want to give away the ending. I don’t look down on sex work, and at the same time, I know that often with sex work comes exploitation. So it’s important to show, or at least discuss, both sides of that. I don’t have a moralistic disapproval of it, but it doesn’t often happen divorced from some kind of context that involves exploitation. Usually people who are engaged in it are doing it because they need money. They don’t do it just because it’s fun. But that’s not necessarily always true. Sometimes people just get into it. Michael Imperioli’s character, I don’t think, often acknowledges the context [of sex work]… Having [his son] Albie [played by Adam DiMarco] be able to speak to the aspects of it that are more complicated, more ethically, that I don’t think Michael’s character really is engaging. Having that be a part of the conversation felt important.

You said previously that you wanted the characters in Season 2 to feel more natural and “less written” than in Season 1. How does that affect your process, and what specifically did you feel was overwritten that you wanted to adjust?

Well, it wasn’t necessarily me criticizing the first season. In Season 1, I knew we were going to be in a bubble at a hotel, and there were all these mandates on keeping it a COVID-friendly production. There was more pressure to have the dialogue itself be the show. I didn’t have the ability to have lots of plot twists and a big canvas. The banter was the event. And with all the Twitter-speak of the first season, I didn’t want to do something that we had already done. This season, some of the plot turns are where the ideas of the season are coming from, and less about the actual content of the conversations. It’s a different kind of approach. As far as the characters, I wanted to make it just a little less spiky and let their actions speak for some of the ideas I’m trying to go for. What’s fun for me is doing a shape-shifting show and trying not to repeat. You need to have enough that it makes it feel like it’s all of a piece, but the content — and the form itself — can kind of shift and be fresh.

I… [Laughs] I don’t really watch “Ted Lasso,” to be honest. But I haven’t been watching anything. For the last year, all I do is this show. It’s not just “Ted Lasso,” you could ask me any show and I’d probably say “no.”