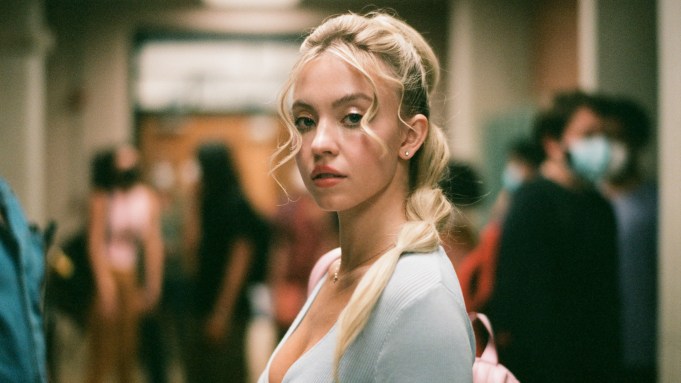 Sydney Sweeney is opening up about filming sex scenes on “Euphoria,” which she says boosted her body confidence.

“She doesn’t know how to communicate without showing her body,” Sweeney said about her character Cassie. “That is a form of communication for her, and she was never taught that you did not need that.”

Sweeney dove into the psyche of her character for Variety‘s “Actors on Actors” series presented by Apple TV+, in conversation with “Yellowjackets” star Christina Ricci. “Euphoria” made headlines earlier this year when Sweeney revealed that there were supposed to be more nude scenes in the show’s sophomore season, until she spoke out against including them because she felt that they weren’t necessary.

“It’s a very safe environment. I’m very fortunate that I am coming up during a time where there is so much thought in this process, and we now have intimacy coordinators,” Sweeney said. “I have weirdly become very confident with my body through Cassie.”

Sweeney also explained the role of an intimacy coordinator after Ricci said she had never worked with one.

“They bring in tools,” Sweeney said.

“No way. Stop it. What kind of tools?,” Ricci responded.

“And we choreograph the whole thing. Sometimes there’s yoga mats that you can put in between each other,” Sweeney said. “Or there’s like pads that you can put, or yoga blocks, there’s some weird stuff. And even if you have agreed to something, they ask you on the spot on the day, ‘Did you change your mind? Because you can.’ It’s really nice. I’ve never felt uncomfortable.”

“I haven’t done a sex scene in a couple years,” Ricci responded. “I’m at that age where they don’t ask you to do them so much anymore. I mean, I don’t really enjoy them.”

Ricci also revealed that she took matters into her own hands on a film set once, and opted to stay naked even when sex scenes were not taping. Sweeney said that wouldn’t happen today, because “they throw robes at you now.”

“I was like, ‘Don’t make me feel weird, like I’m the person who has to be ashamed,'” Ricci said. “I just stayed naked. And I would talk to crew members naked.”

Sweeney responded, “I have to say, it’s kind of like a power move.”

Watch the full conversation in the video below.