The Olympics, ‘The Book of Boba Fett’ and ‘Moon Knight’ also represent on this week’s Top 10 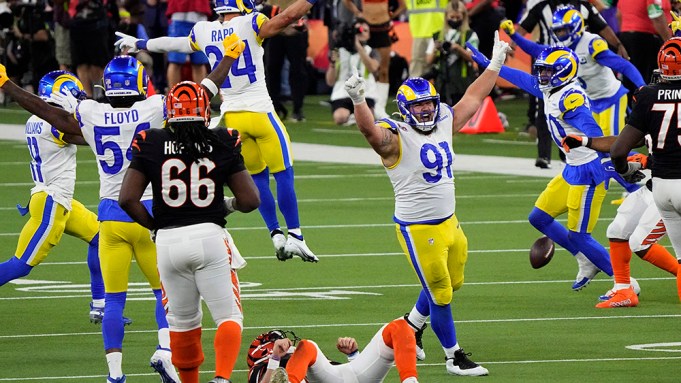 Super Bowl LVI scored a massive touchdown on Variety’s Trending TV chart for the week of Feb. 7 – 13, tackling this week’s other televised offerings with almost 805,000 engagements during its Sunday broadcast.

The game itself, during which the L.A. Rams defeated the Cincinnati Bengals, 23-20, was a hot ticket as celebrities like Jennifer Lopez, Ben Affleck, LeBron James, Will Ferrell and Ryan Reynolds watched from the stands, while down on the field at SoFi Stadium, Dwayne “The Rock” Johnson drew applause as he introduced the game to an energized crowd.

Ryan Reynolds and Will Ferrell repping the @BCLions at the Super Bowl. #CFL pic.twitter.com/SXQGxWX4pg

Although Tupac’s music was present, there was no hologram, as some fans had hoped.

ALL-TIME CLASSIC: Dre doing "California Love" at LA's Super Bowl. If only Tupac could've been there alongside Dre and Snoop. West Coast.

Another figure from the past, Obi-Wan Kenobi, also created a ton of buzz on Twitter this week after Disney Plus announced that the Ewan McGregor-led, live-action series bows this May. “Obi-Wan Kenobi” premieres on May 25 and not May 4, as some fans assumed it would, on the 45th anniversary of the release of “Star Wars: A New Hope.”

“Obi-Wan Kenobi” picks up 10 years after the events of “Star Wars: Revenge of the Sith.” Following the release date and poster reveals, the show drew nearly 430,000 engagements online.

Another Disney Plus “Star Wars” offering, “The Book of Boba Fett,” rounded out this week’s Top 3 with its Feb. 9 finale, in which the title character (Temuera Morrison) finally faced the Pyke Syndicate in a battle for Tatooine. The finale (a “Mandalorian” crossover episode) drew almost 336,000 engagements online. That was bolstered by the post-credits scene, which teased another “Star Wars” series or storyline to potentially follow centered around a fan-favorite character (spoilers here).

It’s nice to see Mando and Boba Fett being such a great duo against the pykes pic.twitter.com/5lXIkanRYm

Everyone jumped to conclusions when I called it the first season. What else would I call it?!!🤷🏻‍♀️

To clarify, it doesn’t imply there’s a 2nd. But I’m keeping my fingers crossed!🤞🏼

Pulling up in fifth place this week was “Moon Knight” thanks to a new Super Bowl promo trailer, which introduced viewers to the many, many sides of Marc Spector (Oscar Isaac). The streamer also unveiled a new poster in conjunction with the game spot to generate even more excitement. The MCU limited series drops March 30 on Disney Plus.

Check out the new poster for Marvel Studios’ #MoonKnight 🌙, an Original series streaming March 30, only on @DisneyPlus. pic.twitter.com/ECOiHVI9O2

That wasn’t the only hot Super Bowl trailer though; Amazon Prime Video dropped a new teaser for its upcoming “Lord of the Rings” TV series, “Rings of Power.” The minute-long spot introduced a Middle Earth set thousands of years before the feature films, a world that includes a young Galadriel (Morfydd Clark), Halbrand (Charlie Vickers) and elf Arondir (Ismael Cruz Córdova). The much-anticipated series drops Sept. 2.

Rounding out this week’s Top 10 was HBO’s “Euphoria,” which fell from the No. 1 spot for only the second time since its January debut (landing at No. 6), and “Peacemaker,” which landed at No. 8 this week. Meanwhile, Netflix’s Korean zombie drama “All of Us Are Dead” and Disney Plus’ “Hawkeye” wrapped up as No. 7 and No. 10, respectively.