Plus Derek Jeter doc ‘The Captain’ and ‘Peaky Blinders’ pop in. 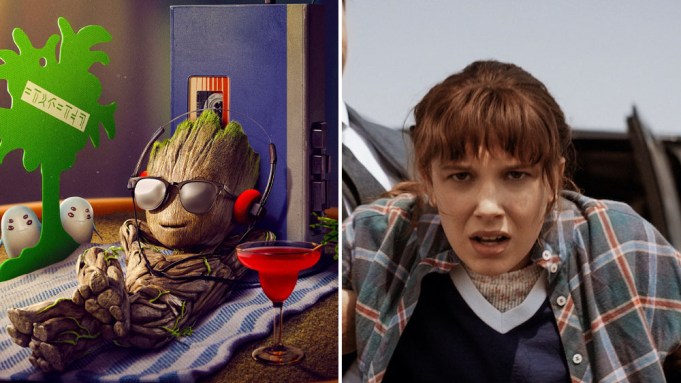 The Upside Down continued to trend across Twitter following the Season 4 return of “Stranger Things.” The Netflix series placed first on Variety’s Trending TV Chart for the week of May 30 to June 5, adding another million engagements to last week’s chart-topping numbers.

The series dropped the first seven chapters of its fourth season on May 27 and continued to spark conversations surrounding the storylines that unfolded. However users also chatted about Will (Noah Schnapp) and his sexuality, along with a particular scene involving Max (Sadie Sink) and Kate Bush’s “Running Up the Hill.” They also speculated about what might come next when the season’s final two chapters drop on the streaming service July 1.

YES!!!! I’M SO EXCITED FOR YOU! PLEASE ALSO CHECK OUT WUTHERING HEIGHTS, BABOOSHKA, THIS WOMAN’S WORK, AND WOW…

According to the streamer, “Stranger Things” hit the top spot in 83 countries during its premiere weekend and has become the biggest premiere for an English language TV show on the service with more than 286 hours viewed globally.

According to the Duffer Brothers, Netflix Executives have cried during the pitch of Stranger Things 5.

Furthermore, they've mentioned that season 5 will come a bit quicker than #StrangerThings4 !

Rooting itself in second place on this week’s chart was the incoming series of original shorts “I Am Groot,” which hits Disney+ on Aug. 10. Marvel released a new poster to generate excitement on June 5 and the series immediately began trending online. In less than 24 hours more than 231,000 users engaged with the show on Twitter as MCU members like “Guardians of the Galaxy” director James Gunn helped fuel excitement.

“Heartstopper,” which previously ran for five weeks in the top spot on Variety’s chart, continued to dominate Twitter again in third place this week. The show earned another 190,000 engagements as fans celebrated the recent two-season renewal and continued discovering the eight-episode first season online. The drama also won the "best musical moment" award at the MTV Movie and TV Awards for the fan-favorite snow scene in the second episode.

Another teen-focused drama was just behind “Heartstopper” as upcoming Disney+ series “Ms. Marvel” also returned to the Top 10 chart. The six-episode series kicks off on June 8 but the Los Angeles premiere at El Capitan on June 2 helped the upcoming series earn more than 155,000 additional engagements.

15 year old Iman Vellani made a Ms. Marvel suit for Halloween and all her friends thought she was The Flash😭. Years later now she IS Ms. Marvel in the MCU. Like woww pic.twitter.com/PbRPdbnj7E

The series stars newcomer Iman Vellani as Kamala Khan, a 16-year-old Pakistani-American who is obsessed with gaming and Captain Marvel. She feels as though she doesn’t quite fit in, until her unexpected superpowers teach her otherwise. Following the series, Vellani reprises the role for the July 2023 release of “The Marvels.”

Capping off the Top 5 was “Peaky Blinders.” The Steven Knight-created series debuts its sixth and final season on Netflix on June 10. The series wrapped across the pond on BBC One in early April but North American fans who have been avoiding spoilers hopped online to generate buzz and count down the days until the Cillian Murphy-starring show returns. Overall the show drew more than 153,000 engagements.

Elsewhere, “Our Flag Means Death” returned to sixth place on this week’s chart after a brief hiatus. Fans have been clamoring online for a second-season renewal for weeks and on June 1 HBO Max finally confirmed Season 2 is on the way. The David Jenkins-created comedy stars Rhys Darby and Taika Waititi as real-life pirates Stede Bonnet and Ed Teach (a.k.a. Blackbeard), however the characters are only loosely based on the notorious historical figures.

Since its debut, the show has received mostly positive reviews from critics. Devoted fans have praised the LGBTQ representation, which in the first season included three queer relationships.

“They found love…now they have to survive it.”

Why is nobody talking about this line from the Our Flag Means Death renewal press release?

The upcoming Derek Jeter docuseries “The Captain” represented the seventh spot on this week’s chart following a tweet from the five-time World Series winning player himself on May 31. ESPN released a promo on its own Twitter account that Jeter shared with his followers, which he quickly accumulated after joining the social media platform that same day.

Less than two months away from #TheCaptain premiere. Thanks to all the hard work of everyone involved. Really excited for you all to see this. https://t.co/ar6NMJdWkR

Along with the trailer the network confirmed the seven-part series debuts July 18. The series makes its worldwide debut before that when it joins this week’s Tribeca Film Festival lineup.

Starz’s “Outlander,” which wrapped its sixth season in May, also continued to draw conversations in eighth place this week with more than 62,000 engagements. “Obi-Wan Kenobi,” which released its third episode on Disney+ on June 1, also continued to be a hit with fans.

Based on streaming hours over its opening weekend, the six-part series proved to be the most-watched Disney+ original premiere to-date. However some of the online conversation revolved around the franchise calling out racism against series star Moses Ingram after the actor revealed she’s received hundreds of toxic messages since the series’ debut for her portrayal of Inquisitor Reva. Series lead, Ewan McGregor, took to social media to blast anyone engaging in these acts.

Rounding out this week’s Top 10 is Hulu’s “The Orville: New Horizons” with nearly 49,000 engagements. The Seth MacFarlane series returned for a third season on June 2 after a three-year hiatus. The space spoof aired its first two seasons on Fox and was renewed on Hulu in 2019 due to a lengthy production schedule. The show was originally expected to return at the end of 2020 but it was subsequently delayed because of the pandemic.

New episode of The Orville: New Horizons this week! Watch this one with the lights off for maximum effect.