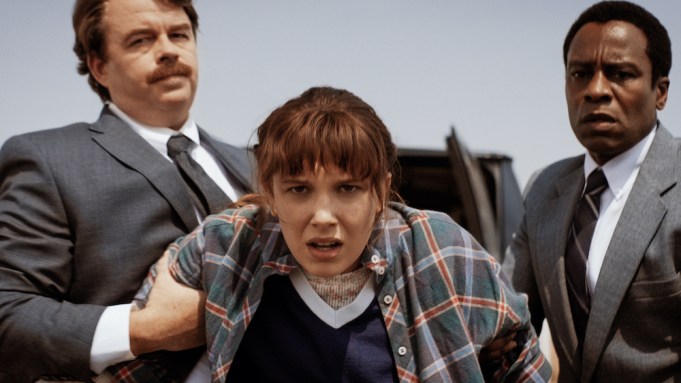 After five weeks at No. 1 on Variety’s Trending TV chart, Netflix’s “Heartstopper” dropped to No. 3 for the week of May 23 to 29. Taking the top spot was another Netflix entry, “Stranger Things,” which debuted the first half of its fourth season after a three-year hiatus.

the first episode of stranger things season 4 without any context: pic.twitter.com/MFOLclVa8Z

The first seven episodes of the season dropped on Friday, stirring up more than 980,000 engagements with fans online. The streaming service included a warning card disclaimer, as the season dropped days after the May 24 shooting at Robb Elementary School in Uvalde, Texas, which left 21 people dead.

“We filmed this season of ‘Stranger Things’ a year ago. But given the recent tragic shooting at a school in Texas, viewers may find the opening scene of Episode 1 distressing,” the card reads. “We are deeply saddened by this unspeakable violence, and our hearts go out to every family mourning a loved one.”

Other fans jumped online to discuss some of the season’s plot points and twists as they await the Season 4B drop on July 1. Some also marveled at the promotional weight thrown behind the series, including an entire takeover of the Empire State Building.

Taking over the No. 2 spot on this week’s chart was “The Mandalorian” following announcements made during a Star Wars Celebration event last week. There, Disney+ confirmed the third season debuts February 2023 -- more than three years after the Season 2 finale.

The Mandalorian and Grogu continue their journey in Season 3 of #TheMandalorian, streaming February 2023 on @DisneyPlus. pic.twitter.com/GXPfUIugNp

The show earned more than 401,000 engagements as the conversation continued on Saturday during a “Mando+” panel that included star Pedro Pascal, and executive producers Jon Favreau and Dave Filoni. Attendees were treated to a first-look trailer that previewed a fight between Mando and the Mandalorians, as well as a return trip to Mandalore with Grogu.

“Heartstopper” continued to draw interest online (in third place, with more than 243,000 engagements), while Ricky Gervais stirred up nearly 170,000 engagements with the debut of his Netflix stand-up special “SuperNature” on May 24.

Much of the conversation revolved around controversial jokes the comedian made about the trans community, which GLAAD subsequently spoke out against. In a statement, the organization called Gervais’ jokes “dangerous” and claimed the special was “full of graphic, anti-trans rants masquerading as jokes.”

Netflix boss Ted Sarandos later defended the special, while Gervais took to Twitter to announce the streaming service has ordered another special, “Armageddon.”

#SuperNature was only released today, but thanks to you, @Netflix have ordered my next show #Armageddon already! The animal charities thank you too. You are beautiful ❤️ pic.twitter.com/PrniZRoscx

Dropping to fifth place on this week’s chart was “She-Hulk: Attorney at Law,” which was down roughly 73% week over week following the first trailer debut on May 17. The Tatiana Maslany-led series debuts Aug. 17 on Disney+.

Another Disney+ entry, “Andor,” was close behind with 138,000 engagements this week. The “Star Wars” series is a prequel to “Rogue One” and debuts Aug. 31 with a two-episode launch. The streaming service also discussed the upcoming show (starring Diego Luna in the role of Cassian Andor) at this year’s Star Wars Celebration, while dropping a new trailer and confirming Part 2 of the series shoots this fall.

The mid-season finale of AMC’s “Better Call Saul” earned 90,000 engagements on Twitter this week as fans dissected the shocking episode and chatted about the final season ahead of its return on July 11. “The Late Show With Stephen Colbert” also entered this week’s Top 10 in No. 8 after the host welcomed guest Beto O’Rourke, the Democratic candidate for governor of Texas.

If anyone is interested, Beto O’Rourke will be on the Late Show with Stephen Colbert on CBS.

Rounding out this week’s chart were two more Disney+ series: “Ahsoka,” the upcoming “Mandalorian” spinoff starring Rosario Dawson, which was also discussed during Star Wars Celebration; and “Ms. Marvel,” which debuts on the streaming service on June 8.

Learn the origins of Ahsoka. Tales of the Jedi is coming Fall 2022 to @disneyplus. pic.twitter.com/svTt7ZKQ9P