‘Stranger Things,’ ‘All of Us Are Dead’ and ‘The Sandman’ are among the top originals drawing interest for the streamer this week 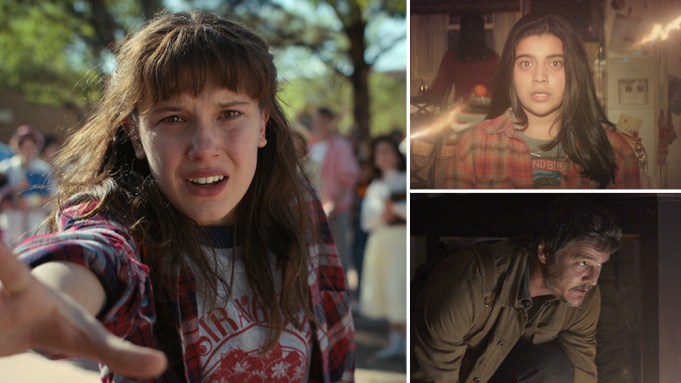 Renewals and trailer debuts were on the agenda for Netflix this week and the strategy paid off with viewers. On Variety’s Trending TV chart for the week of June 6 to 12, the streaming service secured eight of the Top 10 spots with overall mentions and engagements on Twitter.

“Stranger Things” was this week’s winner with more than 638,000 engagements, continuing a three-week run at the top following the show’s fourth-season return on May 27. The horror drama continued to be a buzzy topic with viewers as they caught up and dove into the storylines.

The build-up for Season 4 Part 2 was another reason for the continued chatter. Creatives promised that the finale contains more special effects than the entire third season. The show also dropped a new trailer ahead of the two-episode return on July 1.

In second place was one of the two non-Netflix entries: “Ms. Marvel” on Disney+. The show has been a constant presence on the Top 10 list over the past several weeks, and catapulted to No. 2 following its June 8 debut. The Iman Vellani-led MCU program is released on a weekly schedule for its six-episode season, telling the story of Marvel’s first Muslim superhero. Overall, the show peaked at 344,000 engagements throughout the week.

Ms. Marvel is out on @disneyplus today. It's going to be fantastic. Iman Vellani is a super star.

The other non-Netflix entry, HBO’s upcoming adaptation of video game “The Last of Us,” also drew a crowd this past week thanks to a new photo drop. The Pedro Pascal and Bella Ramsey-starring show drove nearly 329,000 engagements. Fans were excited by a new teaser photo (the first update on the series since September 2021), along with news that the first season has wrapped filming.

It's been an honor to collaborate with @clmazin on #TheLastofUs coming soon to @HBO @hbomax . @PlayStation pic.twitter.com/rkfWIELNt3

The post-apocalyptic show revolves around Joel and Ellie, who must survive a world full of “clickers” -- a.k.a. humans who have been infected by a parasitic fungus that leaves them deranged, and full of sprouts, branches and fungi popping out from their heads. The photo was released at the Summer Game Fest on Thursday.

From there, Netflix dominated the rest of the chart. The sixth and final season debut of U.K. series “Peaky Blinders” landed in the fourth spot with more than 267,000 engagements. It had been a three-year wait between seasons so plenty of fans were excited to get online and start chatting about the six-episode return.

Who's finished season 6 on @netflix?

Speculation about a potential movie following the end of the series was also a large part of the conversation thanks to show creator Steven Knight, who previously revealed his plan was always to end the series with a film.

Any leftover speculation about another Netflix series, “All of Us Are Dead,” was put to rest this past week, after the streaming service confirmed a second-season renewal. The apocalyptic zombie series quickly climbed to the top of Variety’s Trending TV chart back in January when it debuted, surpassing a four-week run by HBO’s “Euphoria.”

All of Us Are Dead has been renewed for Season 2! #GeekedWeek

This week, the show generated another 225,000 engagements. “All of Us Are Dead” is one of the streamer’s Top 10 non-English-language shows of all time and is the second-most successful Korean-produced show, behind “Squid Game.”

Anime offering “One Piece,” which streams on Netflix and Hulu, made the Top 5 this week with nearly 205,000 engagements. Netflix is also prepping a 10-episode live-action series based on the manga. To date, the anime series has released more than 1,000 episodes across 20 seasons in addition to 14 animated films. Crunchyroll also streams the show.

Heading up the back half of this week’s Top 10 was “The Sandman,” another upcoming Netflix adaptation. During a Netflix Geeked Week panel on June 6, the streamer confirmed the show drops on Aug. 5. It also released a new teaser that fueled further anticipation and roughly 155,000 engagements on Twitter.

On August 5th The Master Of Dreams Awakes. https://t.co/jtfVzajD7W pic.twitter.com/bOXvpJhB8c

The drama is based on the comic book series by Neil Gaiman and revolves around a character named Dream, a personification of all dreams, who loses control of the world of Dreaming after a group of black magic occultists kidnap him. Tom Sturridge stars alongside Gwendoline Christie as ruler of hell, Lucifer; Vivienne Acheampong as Dreaming librarian, Lucienne; Jenna Coleman as occult detective Johanna Constantine; Kirby Howell-Baptiste as Dream’s sister, Death; and Boyd Holbrook as the living nightmare, The Corinthian.

Netflix’s “Heartstopper,” another Top 10 mainstay that was recently renewed for second and third seasons, also remained on the chart, but fell to eighth place with 115,000 engagements this week. The two remaining entries were “Bridgerton” with 43,000 engagements and upcoming live-action series “Resident Evil” with 32,000 engagements.