Plus ‘Only Murders in the Building’ and ‘The Real Housewives of Beverly Hills’ build chatter. 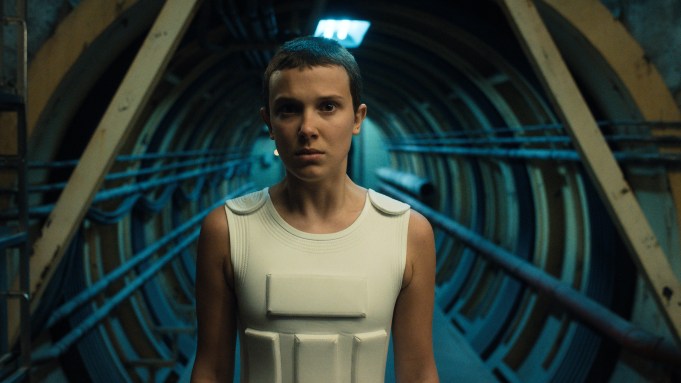 After weeks of waiting to see what happened next in the Upside Down, viewers catapulted “Stranger Things” to the top of Variety’s Trending TV chart yet again. This time, the sci-fi hit garnered 1.37 million engagements, from June 27 – July 3, marking the highest action the Netflix series has drummed up on the chart to date.

Chapter 9. The Piggyback. It will all be over soon.
🎨 @billythebutcher pic.twitter.com/t1RG2IPlF5

The final two episodes were more akin to feature films both in length and budget, and generated a ton of buzz about how they wrapped certain storylines and characters. The penultimate season also generated great interest in the series’ latest villain, Vecna (Jamie Campbell Bower), who appears likely to return in that role for the fifth and final season.

The most iconic scenes of #StrangerThings4 pic.twitter.com/W70pjMbtjQ

The show easily beat out this week’s second-place contender, new entry “Only Murders in the Building.” The Hulu comedy was nowhere close to those numbers, with just over 94,000 engagements. However, fans were still invested in its second season return on June 28.

In his Season 2 review, Variety’s chief television critic Daniel D'Addario calls Selena Gomez’s work the best of her career. Fans, meanwhile, are clamoring to get their hands on some of the series’ signature coats and sweaters (despite the warmer weather). A kissing scene between Gomez and second-season addition Cara Delevingne further sparked online buzz as fans wondered what happened to Gomez’s first-season love interest, Oscar (Aaron Dominguez).

Real friends don’t ask who your favorite is on #OnlyMurdersOnHulu. They ask you where you think Mabel got her outfit.

It's the MCU, can you blame me? 🤷‍♂️
Stay tuned for the full video soon.

Also back on this week’s chart was “Jimmy Kimmel Live!” ABC’s late-night talker entered the chart last week following the announcement that Aespa would appear on the June 29 show. The girl group’s subsequent performance of its single “Life’s Too Short,” along with a viral photo with Paris Hilton, kept the show in the conversation with an additional 85,000 engagements.

Two other repeat entries, Netflix’s “The Umbrella Academy” and “Heartstopper,” rounded out the fifth and sixth spots with 81,000 and 47,000 engagements, respectively. They were ahead of seventh-place entry, “The Real Housewives of Beverly Hills,” which debuted a drama-filled new episode on June 29 and earned nearly 41,000 engagements.

“It Takes a Villain” featured a showdown between Sutton Stracke and newcomer Diana Jenkins that inspired the episode title. The exchange of words took place during Garcelle Beauvais’ birthday party after the pair had a falling out during the girls’ trip to Mexico the week prior.

“One Piece” on Netflix and Hulu, and Starz’s “Outlander” returned to the chart with roughly 39,000 engagements apiece. Finally, a celebration marking 20 years of John Cena catapulted WWE/USA’s “WWE Raw” to the 10th slot with just over 38,000 engagements.