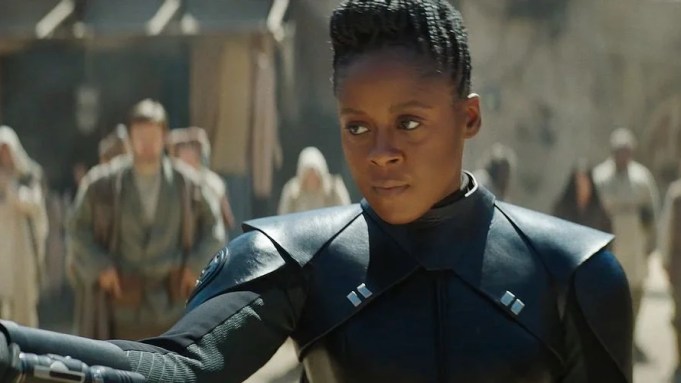 The ‘Star Wars’ franchise is sticking up for one of its own in the wake of online harassment and racism. Moses Ingram, who made her franchise debut in “Obi-Wan Kenobi” as the villainous Inquisitor Reva, revealed on social media that “hundreds” of racist messages have been sent to her by toxic fans since the Disney+ series debuted May 27. Racist messages sent to Ingram include the use of the N-word, as well as claims that Ingram was nothing but an “Obi-Wan” diversity hire.

The official Star Wars Twitter account stood up for Ingram, writing in a statement: “We are proud to welcome Moses Ingram to the Star Wars family and excited for Reva’s story to unfold. If anyone intends to make her feel in any way unwelcome, we have only one thing to say: we resist.”

“There are more than 20 million sentient species in the Star Wars galaxy, don’t choose to be a racist,” the statement concluded.

Ewan McGregor, who stars in and executive produces the series, also recorded a video sharing his support for Ingram and condemning those who harassed her online.

“It just sickened me to my stomach to hear that this has been happening,” McGregor said. “We stand with Moses, we love Moses, and if you’re sending her bullying messages, you’re no ‘Star Wars’ fan in my mind.”

Prior to “Obi-Wan” debuting on Disney+, Ingram told The Independent that Lucasfilm executives warned her that she would likely face harassment online from racist “Star Wars” trolls. POC actors such as John Boyega and Kelly Marie Tran also faced racist criticisms when they joined the “Star Wars” franchise.

“It was something that Lucasfilm actually got in front of, and said, ‘This is a thing that, unfortunately, likely will happen. But we are here to help you; you can let us know when it happens,’” Ingram said.

Moses added at the time, “‘Obi-Wan’ is going to bring the most diversity I think we’ve ever seen in the galaxy before. To me, it’s long overdue. If you’ve got talking droids and aliens, but no people of color, it doesn’t make any sense. It’s 2022, you know. So we’re just at the beginning of that change. But I think to start that change is better than never having started it.”

There are more than 20 million sentient species in the Star Wars galaxy, don’t choose to be a racist.