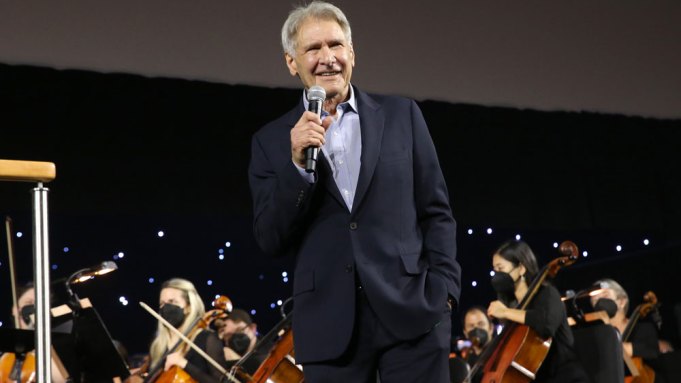 The future of Star Wars is coming to audiences at light speed.

Thursday’s Star Wars Celebration kick-off marked the convention’s first in-person event since 2019, after the 2020 edition was canceled due to the COVID-19 pandemic. The crowd at the event held at the Anaheim Convention Center was packed to the brim with fans adorned in Mandalorian armor, Jedi cloaks and Sith robes (many with added KN95 face masks). Ranging from all over the country and abroad, fans lined up outside the convention center for hours before the presentation. Inside the room, lightsabers waved in the air as the space electrified with excitement.

To kick off the four-day event filled with Star Wars announcements, “Obi-Wan Kenobi” stars Ewan McGregor and Hayden Christensen took the stage in front of a full choir singing the iconic theme “Duel of the Fates.” Yvette Nicole Brown moderated the entirety of the hour-and-a-half long panel, which featured Lucasfilm’s biggest creators talking about upcoming Star Wars projects. From teasing “Obi-Wan Kenobi” details to revealing the new live-action show “Skeleton Crew,” set to premiere next year, Star Wars is prepared to dive headfirst into a new trajectory, albeit one without any major theatrical updates.

But, one of the biggest stars to show up at Celebration wasn’t even there to talk about Star Wars — technically. Harrison Ford, who starred in the “Star Wars” films as Han Solo, made a surprise appearance during the Lucasfilm presentation to give an update about “Indiana Jones 5,” which is due in theaters on June 30, 2023. The presentation also featured a first look at the “Willow” sequel series on Disney+ led by Warwick Davis.

Here are the highlights from the action-packed Lucasfilm Studio panel.

To uproarious applause, McGregor invited the Celebration crowd to an exclusive screening of the first two episodes of the new show in the convention hall at 7 p.m. PT, five hours before they drop on Disney+. The red-carpet premiere screening is open to all Star Wars Celebration attendees with the event’s wristband.

“Andor” is set to be a two-part saga.

The “Rogue One” prequel series debuted its first new trailer at the event, with “Andor” set to follow Diego Luna’s Cassian Andor and the rest of the rebellion as they attempt to undermine the Empire. The teaser offered a first look at Stellan Skarsgård as a rebel leader and Genevieve O’Reilly’s return as Mon Mothma. The first two episodes will debut Aug. 31  on Disney+, with a total of 12 episodes already in the can. Director Tony Gilroy revealed that the show will film 12 more episodes, which will comprise a Part 2 to the series, beginning in November. Part 2 will lead up directly to the events of “Rogue One.” Gilroy also announced that Nicholas Britell — composer on “Succession,” “Moonlight,” “If Beale Street Could Talk,” and more — will score the series.

“The Mandalorian” Season 3 will feature returning fan favorites, including Grogu.

“The Mandalorian” creators Jon Favreau and Dave Filoni were on hand to tease Season 3 of the hit Disney+ show. The sneak peek, which was only available to attendants, showed Pedro Pascal back in fighting form with the lovable Grogu (aka Baby Yoda) as he attempts to pay retribution for his sin of helmet removal. Mando vows to return to the Mandalorian home world Mandalore in order to reclaim his honor. Along the way, it seems Bo-Katan (Katee Sackhoff) has made a turn for the worse and will be the new season’s antagonist, with Sackhoff making a surprise appearance on stage. Also returning is Carl Weathers as Greef Carga. The third season will premiere in February 2023.

Favreau and Filoni also gave a quick update on the Rosario Dawson-starring series “Ahsoka,” which Filoni is directing. Because the show is in the middle of filming, Dawson didn’t make an in-person appearance at Celebration, sending in a video clip to apologize for her absence instead. That series is also set for 2023.

For a final surprise, Filoni introduced Jon Watts and Christopher Ford to share new details about the quartet’s upcoming series. The show is officially titled “Skeleton Crew” and will star Jude Law, streaming on Disney+ in 2023.

The legendary composer turned 90 in February, but Lucasfilm president Kathleen Kennedy kept the party going with a tribute to Williams at Celebration. But the real gift was for the fans, as Williams appeared with the Pacific Symphony Orchestra to play the Obi-Wan theme live for the first time.

Williams then led the musicians in the “Indiana Jones” theme “The Raider’s March,” as Harrison Ford and “Indiana Jones 5” director James Mangold took the stage to preview their new movie, on which filming is nearly complete.

“It’s a special honor for me to be able to congratulate John on his 90th birthday,” Ford told the crowd. “John, that music follows me everywhere I go… and I’m happy about it.”

Ford, Mangold and producers Kennedy and Frank Marshall also unveiled an early photo from the film, which shows Ford’s Indiana Jones bathed in an amber-hued light as he crosses a rickety rope bridge. Looks precarious and right up Indy’s adventure-seeking alley!

In 2023, Harrison Ford returns as the legendary #IndianaJones. Check out this first look of the new James Mangold-directed film. pic.twitter.com/ALs82tsmXw

Williams wrapped up the Lucasfilm presentation by conducting the orchestra in “The Imperial March” from “Star Wars,” before attendees gave him their gift — with the packed house singing the composer “Happy Birthday.”

Watch a full recap of the studio showcase in the video below: