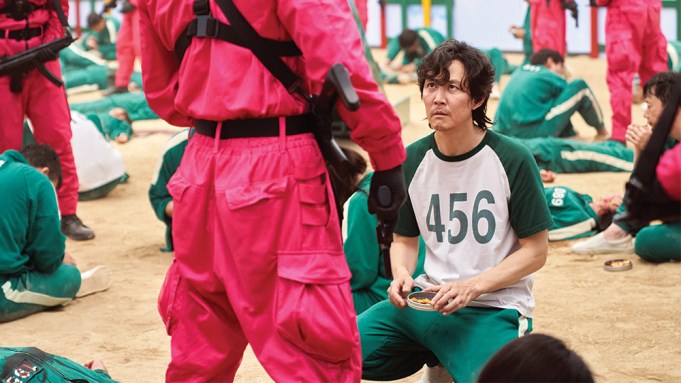 When Netflix announced it had greenlit a reality series based on the murderous competition in “Squid Game,” fans of the hit Korean show were quick to point out the irony in translating the tragic tale, which creator Hwang Dong-hyuk told Variety is a “fable about modern capitalist society,” into reality TV.

Now, Hwang is urging “Squid Game” fans not to “take things too seriously,” saying he has met with the creator of the reality spinoff, titled “Squid Game: The Challenge,” and hopes “they will be carrying on my vision and intention as much as possible for the show.”

Hwang addressed the spinoff Monday night at the Emmys, where “Squid Game” made history — and scooped up a handful of awards in the process. Hwang won best directing for a drama series for the pilot episode, “Red Light, Green Light,” while star Lee Jung-Jae became the first Asian actor ever to win best actor in a drama.

“I think that even though our show does carry quite a heavy message — and I know that there are some concerns of taking that message and creating it into a reality show with a cash prize,” Hwang said backstage at the ceremony. “However, I feel like when you take things too seriously, that’s really not the best way to go for the entertainment industry. It doesn’t really set a great precedent.”

Hwang added: “I would say that reproductions of such efforts are going to bring new meaning to the industry, and I hope that this is going to be a great new direction for the industry overall.”

“Squid Game” was nominated for 16 Emmys and won six. The series, which broke Netflix viewership records, has been renewed for Season 2.