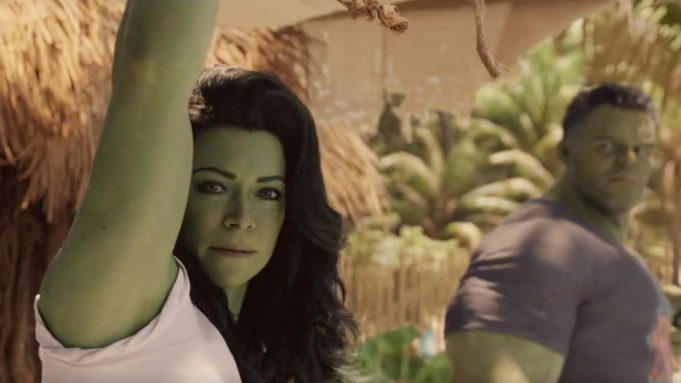 Tatiana Maslany is getting into lawyer mode. A new trailer for “She-Hulk: Attorney at Law” has been released out of Marvel Studio’s Comic-Con panel this Saturday. The cast and crew in attendance billed the series as Marvel’s first half-hour TV comedy.

“This is so overwhelming,” Maslany said at the top of Comic-Con panel. “What’s so exciting about She-Hulk is this show is very different. It’s irreverent humor. She-Hulk is trying not to be a superhero.”

Part-superhero show and part comedy, the series centers on Jennifer Walters (Maslany), a brilliant lawyer and the cousin of longtime MCU hero Bruce Banner (Mark Ruffalo). When Jennifer suffers a major injury, Bruce is forced to provide her a blood transfusion, causing her to inherit his powers to turn into a “hulk” version of herself. Unlike Bruce, when she hulks out Jennifer largely retains her personality and intelligence, and she quickly begins to relish the freedom and strength her new 6-foot-7-inch form provides. As the She-Hulk form gives Jennifer new confidence in her personal life, it causes new complications for her professional life, as she gets recruited to work for a law firm specializing in cases involving super-humans.

Along with Ruffalo, returning MCU players include Benedict Wong as Sorcerer Supreme Wong and Tim Roth as Emil Blonsky, better known as Hulk’s frequent enemy the Abomination, who is one of Jennifer’s primary clients. The two notably appeared together in the mid-credits scene of last year’s “Shang-Chi and the Legend of the Ten Rings.” Jameela Jamil plays She-Hulk’s rival, the super-strong Titania, while Ginger Gonzaga plays Jennifer’s best friend Nikki. Josh Segarra, Jon Bass and Renée Elise Goldsberry round out the cast. The trailer also teases an appearance by Charlie Cox as Daredevil, the other famous lawyer superhero in the Marvel canon.

The first episode of “She Hulk” will premiere on Disney+ Aug. 17. The show is the third Marvel Studios series to release this year, following “Moon Knight” in March and “Ms. Marvel” in June. In addition, the Studio will also release a currently untitled Halloween special on Disney+ in October, and “The Guardians of the Galaxy Holiday Special,” from director James Gunn, this December.

Watch the trailer for “She-Hulk: Attorney at Law” below, and for more information on upcoming Marvel projects, check out Variety’s regularly updating calendar of upcoming MCU TV shows and films.