How — and Why — ‘Search Party’ Staged the Zombie Apocalypse

SPOILER ALERT: This piece contains spoilers for the series finale of “Search Party.”

“Search Party” began with a simple premise: When a former college classmate goes missing, Dory Sief (Alia Shawkat) and her cohort of Brooklyn twenty-somethings embark on a mission to find her. Five seasons later, Dory — now a spiritual guru and cult leader — hides in an underground bunker as zombies ravage the streets of New York City.

While “Search Party” has never shied away from bold ideas — the HBO Max show killed off its protagonist-turned-antihero at the end of last season, only for Dory to reawaken 37 seconds later — Season 5 sunk its teeth into completely new territory: Dory escapes a psychiatric facility and teams up with billionaire tech mogul Tunnel Quinn (Jeff Goldblum) to produce “enlightenment pills,” which quickly turn the population into flesh-eating monsters. However, despite drastic genre shifts across seasons, at its core, the show remains the same: Dory swindles her friends into putting their faith in her (this season more literally), and a search for answers reveals to be a search for self-actualization. But how — and why — did “Search Party,” a campy show about self-obsessed millennial hipsters, kick off the zombie apocalypse?

“Originally, we thought Season 4 would probably be the end of the series, so we were writing toward that. Though, early in production, we felt like we needed to have another season,” co-creator and co-showrunner Charles Rogers tells Variety. “We liked the idea that Dory’s death was a turning point — it wasn’t an end — and she would be reborn and enlightened and kind of a Marianne Williamson type. We liked the idea that the friends caused the end of the world and that Dory leads the charge on that.”

Rogers and “Search Party” co-creator Sarah-Violet Bliss say their original plan was centered around a “virus spreading globally,” but once COVID became serious, they shelved the idea in favor of a more fun alternative. After all, “Search Party” has always seemed to parallel the current moment while avoiding direct parody. Season 4, which sees Dory trapped in (a model of) her apartment, premiered as many hid inside during last year’s winter COVID surge. In the series finale, which dropped on Jan. 7, the cast jaunts around a desolate New York City, adapting to the new normal. There’s no pandemic in the world of “Search Party,” but Bliss says this season “reflects how it feels to live through something totally wild and crazy, and then it just becomes your everyday life.”

“A lot of times when shows try to really make a point or take a stand, they just end up being overt or didactic — and it becomes an eye-roll,” adds John Reynolds, who plays Dory’s doofy, passive boyfriend Drew. “I think ‘Search Party’ touches on things that are happening culturally, but it doesn’t really sit there and stew in them. It purposefully barrels through them in a more cathartic, comedic way.”

One of the beautiful things about “Search Party” is that through all its genre changes — from psychological thriller to courthouse drama to zombie horror — the core dynamic among Dory, Drew, Elliott (John Early) and Portia (Meredith Hagner) remains. In the Season 1 finale, as the group drives into Canada to rescue Chantal (Clare McNulty) — all while running from the obsessive, potentially dangerous Keith (Ron Livingston) — Portia and Elliott’s main concern is getting “brekky somewhere cute in Montreal.” In Season 3, as Dory and Drew stand trial for murder, Portia and Elliott ponder whether they’re the most famous people in the world. In the series finale, as the group rushes toward a barricade to escape zombies, Drew sees Chantal’s creepy ex-boyfriend Gavin (Griffin Newman) and makes the group reroute to avoid him. Minutes later, in an underground bunker, Dory and Chantal argue like schoolgirls, each taking credit for ending the world.

“Their motivations stay the same,” Reynolds says. “The juxtaposition between the funny banality of being a millennial in Brooklyn and the whirlwind happening around them is one of the genius things about the show.”

It’s no secret that “Search Party” doesn’t share the same budget as, say, “The Walking Dead.” Thus, orchestrating the zombie apocalypse posed unique challenges and constraints. “I joke that we’re the only show that can put a tank in Williamsburg, have hundreds of extras and stage the apocalypse in the middle of Brooklyn — and only get one take because there’s just not enough time,” Rogers says. “It was a real crash-course in indie-blockbuster making for us.”

True to the show’s bargain mentality, costume designer Matthew Simonelli says he put an emphasis on thrift-store looks this season, and — thanks to “Walking Dead” alum Eulyn Colette Hufkie — scored a wardrobe kit for a “very good price.” On the makeup side, department head Christina Grant says the team splurged on custom contact lenses and custom zombie goo, vomit and blood, but they took an “economical” approach by grouping the zombies into three distinct tiers.

“Figuring out how to zombify people without custom prosthetics was probably the biggest money and time saver,” Grant says. “‘A’ zombies had prosthetic bites, full color makeup, mouth color, blood, custom contacts — the works. ‘B’ zombies had painted-on wounds and veins, and some blood and black around their mouths — but nothing went in the mouth and no contacts. ‘C’ zombies just had blood and black in strategic places. That way, we could place the zombies appropriately in front of the camera knowing who was going to be featured and still get the larger apocalypse effect.” 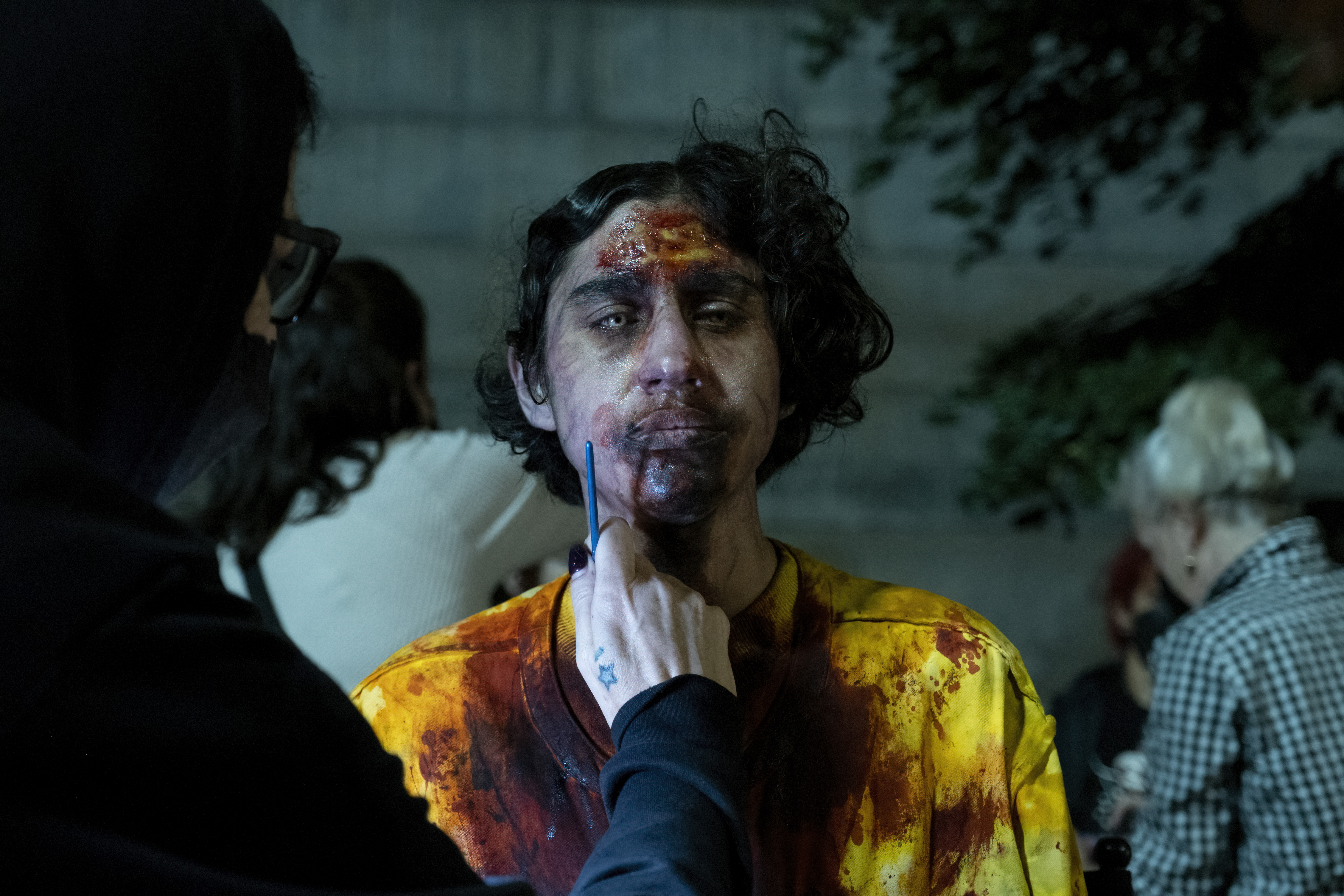 Moving from TBS to HBO Max after two seasons, “Search Party” became a cult hit and expanded its audience from niche to mainstream. But as the show became more popular, its creators took more risks; its plot grew darker and more absurd, leading up to the apocalyptic twist that marks “Search Party’s” single most ambitious feat. The series comprises dozens of decisions Rogers and Bliss admit may have alienated people, but their confidence in making those decisions is one of the things they’re most proud of.

“We can’t control the legacy that ‘Search Party’ is going to have, but it’s really interesting now to step back and watch it,” Rogers says. “I think it has a very specific place in the entertainment industry.”