Plus ‘Euphoria’ drops a fateful finale and ‘Outlander’ drums up chatter 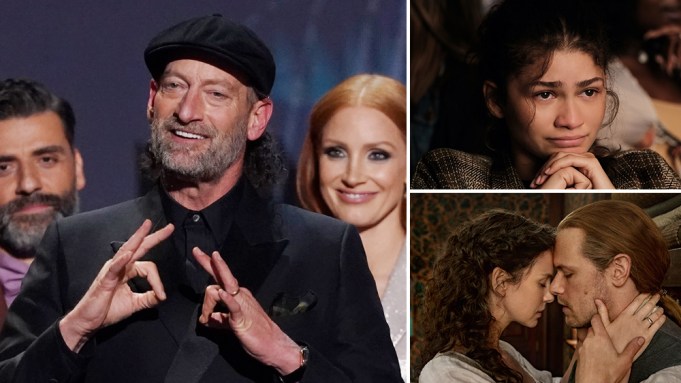 Celebrities showed up in droves for Sunday’s SAG Awards, driving the first big awards show of the year (and since the pandemic) to the top of Variety’s Trending TV chart for the week of Feb. 21 to 27. The show collected an impressive 3.6 million engagements during its broadcast on TNT and TBS, earning more than nine times that of this week’s runner-up, “Euphoria.”

The emotional and politically charged telecast doled out top prizes to projects like “CODA,” “Ted Lasso” and “Succession.” The internet also followed along as winner Will Smith (“King Richard”) teared up during his acceptance speech, Ariana DeBose (“West Side Story”) became the first Latina to win a film award from the Guild and the cast of “Squid Game” made history. Twitter also lit up when Michael Keaton was in the restroom when Salma Hayek announced his “Dopesick” acting win. He later delivered a tearful tribute to his late nephew.

So well deserved. Will Smith takes home his first Actor® for Outstanding Performance by a Male Actor in a Leading Role! #sagawards pic.twitter.com/gD6I4GTVLs

Jung Ho-Yeon receives her first-ever Actor® for Outstanding Performance by a Female Actor in a Drama Series for her role in #SquidGame #sagawards pic.twitter.com/PJAHCavDni

Michael Keaton was in the men's room when he won + RAN IN and rolled onto the stage. In case you needed another reason to love him. #SAGAwards

Nicole Kidman and Selena Gomez in barefoot at the #SAGAwards pic.twitter.com/l07CikN5OL

The Season 2 finale of HBO’s “Euphoria” also dominated Twitter chatter on Sunday night. “All My Life, My Heart Has Yearned for a Thing I Cannot Name” proved to be a powerful episode that played with fate while raising plenty of questions ahead of the recently ordered third season.

“Euphoria” has been a top contender on Variety’s Trending TV chart throughout its Season 2 run, landing in the first or second spot each week except during the Super Bowl. The finale earned about 386,000 engagements -- the most of any scripted series this week -- but that figure was still down from last week’s penultimate episode, which drew more than 461,000 engagements.

Starz’s “Outlander” rounded out this week’s Top 3 ahead of its Season 6 premiere on March 6. Interviews with stars Caitriona Balfe and Sam Heughan, in which they teased the upcoming action while speculating about the show’s future beyond the previously renewed seventh season, helped to generate 152,773 engagements.

The anticipation is REAL! #Outlander returns in just one week. pic.twitter.com/QYykiroC5Z

News of a potential prequel spinoff series also drove fan engagement. Variety exclusively reported the news ahead of the weekend, revealing that a writers’ room — led by executive producer and showrunner Matthew B. Roberts — is assembling and preparing to kick off in the coming weeks.

Netflix’s “Inventing Anna,” which debuted in full on Feb. 11, placed fourth this week, as viewers caught on to the Julia Garner-led series, based on real-life figure Anna Delvey/Anna Sorokin. Interviews with the actual figure as well as Neff Davis (played on the series by Alexis Floyd) also helped drive traffic, although some of the 152,773 engagements included fan-shipping between Anna Delvey and “The Tinder Swindler,” Simon Leviev.

Watching Inventing Anna…and all I can think about is the sympathy she got from the reporter from the start. She stole thousands, barely spent 2 years on Riker’s & got $320,000 from Netflix for this story. Meanwhile Kaleif Browder spend 3 years there w/no trial over a backpack.

“Killing Eve” rounded out the Top 5 with its fourth and final season premiere on AMC, AMC Plus and BBC America on Sunday night -- an episode that included a water cooler moment where Villanelle (Jodie Comer) dressed as Jesus. The show drew 46,302 total engagements, edging out the debut of Netflix’s “Vikings: Valhalla” by about 1,200 tweets.

What a look. #KillingEve pic.twitter.com/PyqfNQuFba

Heading up the second half of this week’s Trending chart was Apple TV Plus’ upcoming series “Pachinko,” a multi-generational saga based on Min Jin Lee’s novel of the same name. The streaming service dropped a new trailer for the show last week, generating buzz ahead of the March 25 debut.

One gripping story, told over four generations. Pachinko is a sweeping saga about a Korean immigrant family's quest to survive and thrive. #Pachinko premieres March 25, only on Apple TV+ https://t.co/YIImGpNcex pic.twitter.com/cp5xN30xmC

The Olympics, which wrapped on Feb. 20, made another appearance on this week’s list at No. 8, narrowly surpassing the debut of Netflix’s Korean drama “Juvenile Justice” by 559 engagements. Rounding out this week’s Top 10 was FX on Hulu’s “Under the Banner of Heaven,” the Andrew Garfield and Daisy Edgar-Jones-led miniseries adaptation of Jon Krakauer’s 2003 nonfiction book.

Starring Andrew Garfield and inspired by the true crime bestseller by Jon Krakauer, FX's Under the Banner of Heaven is coming soon. Only on Hulu.

The show focuses on the investigation into a double murder by two Mormon brothers who killed their sister-in-law and niece in 1984 after one brother believed he received instructions from God to commit the crimes. FX on Hulu revealed a teaser for the series, which drops later this year.