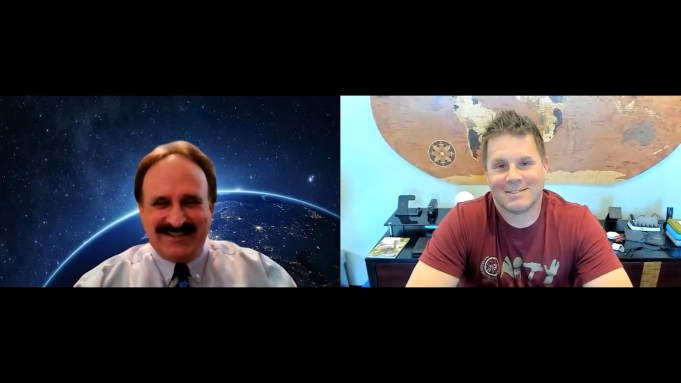 Although the series was created by his father Gene Roddenberry, and starred his mother Majel Barrett as Nurse Christine Chapel, Roddenberry was born after the original show was cancelled, and spent his childhood watching series like “Knight Rider” and “Dukes of Hazzard.”

The episode of the series that really showed Roddenberry the power of the series was the Season 1 episode of TOS “The Devil in the Dark,” which finds the crew of the USS Enterprise faced with a bizarre, seemingly violent creature in a mining colony. The central twist of the episode sees the crew discover that the alien is actually an intelligent being, protecting the eggs of its children — a twist that blew Roddenberry’s mind as a child.

“That was the first time a story, where there’s a twist and it makes you think, and it makes you reflect and it makes you go, ‘My God, we could be that dumb, we have often have been that dumb. We often are that dumb. And hopefully in the future will be less oblivious,” Roddenberry said. “So that was my first click into what fans meant when they said ‘Star Trek’ was intelligent, thought provoking, and in some cases, perhaps life changing.”

During the panel, Roddenberry, who serves as an executive producer for the recent “Star Trek” shows on Paramount+, discussed the importance of diversity and inclusion in the “Star Trek” franchise. The original series cast was famously diverse for its time, with characters such as Uhura and Sulu being groundbreaking. Reflecting on the show’s continued history of diverse casting, Roddenberry said that inclusivity is baked into the DNA of the show, which followed a crew that traveled the galaxy to seek out new and different life forms.

“If we all do the same thing every day, we don’t grow, we don’t evolve, we don’t learn anything. And so it is the diversity in everything, whether it’s something outside, different trees, different looking people. But more importantly, it’s the difference in idea,” Roddenberry said. “The Enterprise and the crew weren’t out exploring the galaxy, looking just for weird looking aliens. They were for species that looked at the universe in a different way than we did. Because up to that point, humanity had finally come together and realized that it’s our diversity that makes us special. We realized working together, we can do so much more. And so now we were trying to find people who looked at the universe in a different way, because we knew that we could grow and evolve by hearing something we’d never heard before. And whether we agreed with it or not, it was the hearing of that, the analyzing of it and the taking pieces out of it that we agreed with and incorporating into our own that allowed us to grow.”

Watch the full keynote conversation above.