Inside the Secrets of ‘The Rings of Power’ Title Sequence 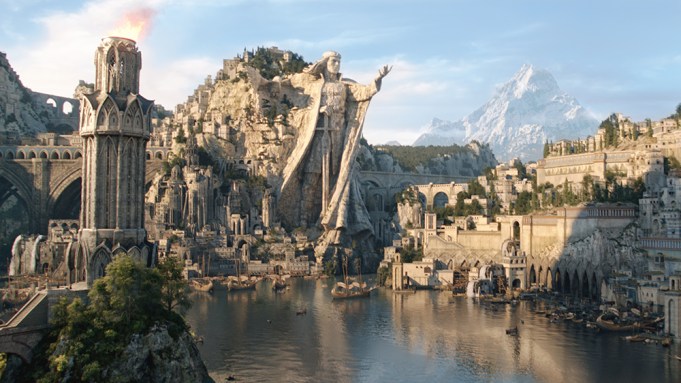 Main title creators Mark Bashore and Katrina Crawford were given a unique challenge in creating the title sequence for “The Rings of Power,” a series from the world of J.R.R. Tolkien that would introduce fans of “The Lord of the Rings” to the much older and less familiar Second Age.

Bashore credits Crawford with their approach to the overall main title design, saying, “She came up with this idea of portals into other worlds. You have 90 seconds or sometimes less to transport people psychologically into a place where they’re ready. And it’s oftentimes the only thing that lives across seasons and seasons. Everything else changes. The directors, the writers, the shows change, but the one thing is that portal.”

Tolkien once wrote that his world was created from the music of angelic beings. It was with such heavenly inspiration that Bashore, Crawford and their team at Plains of Yonder explored the science of cymatics, a “natural phenomenon that makes sound visible to the eye.” Bashore explains, “We came with the idea of a main title built from the world of sound, not built from the world of film.”

In their quest to find the right visual landscape, they created a “cymatics home kit” and experimented with different materials and techniques on their kitchen table. Crawford, who has a PhD in molecular biology, discovered beautiful combinations when she spread the sand out on a tray and paired it with the sound of Gregorian chants. In close proximity, sound vibrations at various frequencies cause the sand to form patterns. When Crawford filmed the effect in slow motion with her iPhone, they knew it was the right way to introduce Tolkien’s vision to a modern audience. They continued to experiment with a variety of materials from fungal power to pigments to learn more about behaviors of particle size and density, as well as how to control the process. Though the finished visuals would eventually be paired with Howard Shore’s main title theme, they played with opera music, Gregorian chants and musical instruments like the ocarina, steel triangle and guitars.

When the time came for the actual filming, they paired sand of varying particle sizes with a single Hz tone from a computer tone generator. Every frame of the title utilizes this technique, and many frames would later be enhanced or cleaned up with CGI to achieve a finished product that represents a world created through song. Crawford says the creation myth was their starting point, “But then it becomes this bigger thing. And there are so many layers where the metaphor really worked. So, you can do single frequencies and you can get patterns. You see a diamond and it does feel like magic, but when I put chants in, these sounds are oscillating and changing. You see the transformation where you’re getting things forming and breaking. That transformation is such a metaphor for everything. For the world-building, for the breaking, for the destruction, for the epic-ness of ‘Lord of the Rings.’ That greatness comes, and this area becomes massive and important. And then it’s gone. There were so many things about it that were just delightful, but also really fit this idea of epic and big worlds.”

The title sequence is not all random. In addition to diamonds and swirls, there are mountains, trees, islands and continents. And there are rings, nine in one frame, three in another. Numbers played an important role in Tolkien’s work ,and Crawford and Bashore wanted to honor this while hinting at events within and beyond the Second Age, in which ‘Rings of Power’ is set.

Crawford details the use of the rings throughout the sequence, “We have the nine for men, the seven for the dwarves, the three rings for the elves, and a single ring. All those combinations are through there, and they’re at the beginning and end. We start with those, and they are building other things, and then we end with them.”

Bashore adds, “We thought it was cool that a sequence could end as it began, totally in lockstep with the Tolkien universe of things coming and going across millennia. That if you began with something as abstract as that and ended as dust, it would create the sense of an endless cycle.”

But are there clues of what’s to come hidden within the symbols? Yes, although maybe not in the way some viewers hope. Bashore explains, “I don’t think we went out of our way to tell people how this is going to shake out season one. But it does take into account all the episodes of season one, revealing new things in the title.” Crawford adds, “We’re not trying to trick you but to give you the idea that things may not be what they seem. So that sense that if you’re thinking about that, maybe you will notice things in a different way.”

“There is one,” Bashore teases.