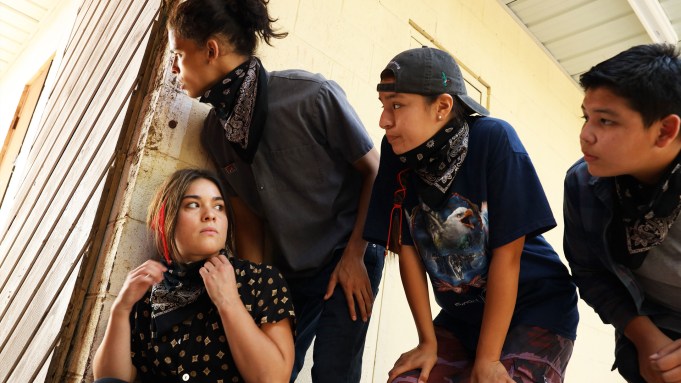 Sterlin Harjo and Taika Waititi — the co-creators of “Reservation Dogs” — met in the mid-aughts, and though Harjo is from Oklahoma and Waititi grew up in New Zealand, they immediately bonded over their shared experiences as Indigenous filmmakers. As Waititi’s star rose, the two remained friends, but “I never talked to him about work,” Harjo said. “I mean, enough people I think are trying to get stuff from Taika, so we just kept it as friendship.”

That changed a few years ago, though, when Waititi mentioned to Harjo that he had an overall deal with FX, were Harjo to have any ideas for a show. “That’s sort of all I needed to hear,” Harjo said with a laugh during a video interview for Variety’s Showrunners Sitdown with Kate Aurthur presented by FX.

Their ideas for what would eventually be the series “Reservation Dogs,” which premiered on FX last August, were different, with Waititi wanting to create “more of a vigilante sort of like Batman” in the form of a Maori kid and Harjo leaning toward a “Stand by Me”-type about kids getting bullied. “We took these two ideas and just sort of shook them up,” Harjo said.

“Reservation Dogs” is shot in Oklahoma, which Harjo insisted upon after FX had initially suggested it be produced out of New Mexico. “I told my agents that I didn’t want to do that — I wouldn’t want to do the show, or I would rewrite the show,” Harjo said. “And to everyone’s surprise, I said that.”

There was a reason Harjo felt strongly about the setting, and not only because it’s where he grew up. “Whenever you’re making a show about Indigenous people, there’s so much history of land displacement,” he said. “We were brought here on the trail of tears from Alabama, Georgia, Mississippi and we were transplanted to Oklahoma, and then we rebuilt. There’s so much tied into that. And there’s so much history of character that’s tied into that, and I had to shoot it here.”

The discussion with FX ended happily: “They got it immediately. And I didn’t have to fight.”

“Reservation Dogs” follows four teenaged best friends who live on a reservation, but, at least when Season 1 starts, are yearning to get out and move to California. They’re missing a key member of their group, Daniel (played in flashbacks by Dalton Cramer), who died by suicide — which is a plague in Native communities. Though “Reservation Dogs” is first and foremost a comedy, Harjo weaves the poignant aftermath of Daniel’s suicide into the story seamlessly.

“It’s hard to explain, because I think it actually lends itself to our humor, Native humor — the pacing of it,” Harjo said. “I think that it’s always been close to tragedy, because it’s about survival. Humor has always been about survival. It’s like laughing in the face of all of this tragedy that’s surrounding us.”

In a Zoom interview from his trailer on the set of “Reservation Dogs,” Harjo answered all our questions about the show, from how he put together the cast of mostly unknown actors, to whether Wes Studi will again appear in the 10-episode second season. He also delved into balancing comedy and tragedy, why he brought two of the show’s cast members into the writers’ room — and whether things have finally changed for Native creators.

“It is the show that if you would’ve asked me, ‘What show would you make — what would be the No. 1 show that you would want to make?’ It would be this show,” Harjo said. “So I feel very lucky.”