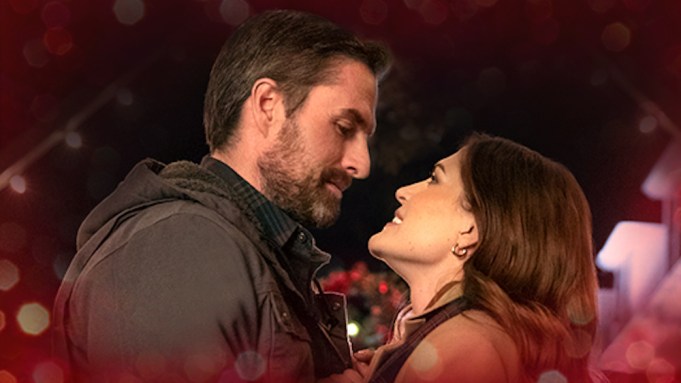 QVC is entering the ever-growing original holiday movie space this year with the debut of its first-ever title in the genre, “Holly & the Hot Chocolate.”

Streaming on free platform QVC+ beginning Thanksgiving Day, the film revolves around Holly, “a big city food critic who unexpectedly finds herself stuck in the small town of Pine Falls during Christmas,” per QVC’s description. “Surrounded by locals who love the season as much as she does, Holly soon learns at the center of their holiday spirit is a special hot chocolate recipe sold in the town square. With the help of a charming, albeit humbuggish, tow-truck driver, Holly gets to experience firsthand why Pine Falls is one of the best Christmas towns in America — and what makes their hot chocolate so magical.”

The idea for the movie came from QVC’s “In the Kitchen” host David Venable, who makes a cameo appearance in “Holly & the Hot Chocolate” as a hot chocolate vender.

“It’s a charming story, and we’ve learned that as our audiences spend more time with us and our hosts, we want to bring them into the world of holidays organically, inorganically, all the ways that they choose to be with us,” Soumya Sriraman, president of streaming for QVC and HSN parent company Qurate Retail Group, told Variety.

Of course, this being a QVC production, it wouldn’t be complete without a product tie-in, which is coming courtesy of famed New York City dessert shop Serendipity. Venable will appear on-air selling the special hot chocolate  featured in the movie, a concotion made in partnership with Serendipity, while telling behind-the-scenes stories from production and showing off movie props from set.

“The team orchestrated it in such a manner that it doesn’t feel forced,” said Sriraman, who previously served as head of Amazon’s Prime Video Channels, adding: “QVC, at its heart, believes that shopping shouldn’t be soulless. Shopping is about a relationship and ensuring that we are bringing the customer along on the journey with us.”

Competing with holiday TV movie titans Hallmark, Lifetime, Netflix and Freeform, as well as newer entrants like BET+ and Great American Family, is no easy task, but Sriraman believes the QVC audience’s appetite for its “Christmas in July” programming is a good indicator they will be tuning into “Holly & the Hot Chocolate,” too. And she’s willing to take the gamble to see how it pans out.

“Streaming is a space where you can experiment with new formats, new connections from storytelling to commerce, from product placement into more inorganic, factual, episodic pieces,” Sriraman said. “We already have a very, very large footprint, in terms of both our linear households as well as our streaming reach. We just launched on the Roku Channel and are continuing to get our FAST channels in the right places where our customers expect them. All of this is just scratching the surface.”

“Holly & the Hot Chocolate” stars Ryan Farrell, Hanna Gaffney, Steve Gerben, Olivia Gropp and Venable. It was directed by John McKeever and written by McKeever and Mike Gleason based on Venable’s idea.

The movie will be streaming on QVC+, which is available through streaming devices including Roku and Fire TV and at qvcplus.com, throughout the holiday season.

See the trailer for “Holly & the Hot Chocolate” via Variety‘s exclusive video above.