‘Euphoria’ and ‘Ozark’ also return to top spots as ‘The Cuphead Show’ cracks the Top 5. 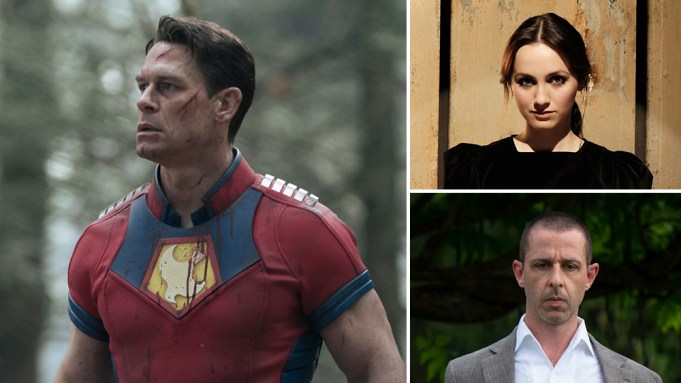 The Season 1 finale of HBO Max’s “Peacemaker” blew away the TV competition to earn the top spot on Variety’s Trending TV chart for the week of Feb. 14 to 20. The Thursday finale drew nearly 700,000 engagements with fans on Twitter, catapulting the show from the ninth spot on last week’s rankings to its inaugural first-place finish.

The status is reflective of the finale ratings, which, according to HBO, had the biggest single-day performance for an HBO Max original series ever. The creator also revealed in a tweet the finale was up 44% from the premiere.

F#CK YEAH!! Peacemaker finale had the biggest single day performance for a Max Original series ever and finale viewing was up 44% over premiere. Thanks to all the fans who kept showing up more and more every week this season. @HboMax @DCpeacemaker pic.twitter.com/pp8c9JGuGl

The butterfly-filled finale also sparked plenty of online chatter thanks to some surprise Justice League cameos and a scripted dig at Green Arrow that got former “Arrow” star Stephen Amell’s attention. Amell responded on Twitter by targeting “Peacemaker” star John Cena and his wrestling past, while calling attention to his current role as a wrestler on Starz’s “Heels.”

Haven’t seen it. Too busy showing Cena what professional wrestling should actually look like on tv. https://t.co/CDE35wi8XX

Others went online to partake in Cena’s celebratory announcement that the superhero show has been renewed for a second season on HBO Max.

Just learned from the good folks at @hbomax that the #PEACEMAKER finale had the biggest single day performance for a Max Original series and was up 44% over the premiere episode! That is a F#CKLOAD of ✌️ and does not happen without ALL OF YOU! Truly grateful. Ready for Season ✌️!

Elsewhere on this week’s trending list, “Euphoria” reclaimed a top spot at No. 2 after falling to No. 7 last week in the wake of the Super Bowl and several anticipated TV show trailers and teasers tied to the big game. Fans were particularly chatty about a storyline involving Maude Apatow’s character, Lexi, and her lavish (and meta) high school play.

lexi using half the school’s budget to fund this expensive ass production for her play, i just know a few extracurriculars got shut down

Two shows that have wrapped their current seasons, “Ozark” and “Succession,” also appeared on the list this week in the respective third and fourth slots. Part of the discussion surrounding “Ozark” had everything to do with series star Julia Garner and her current, contrasting role on Netflix’s “Inventing Anna,” as fans realized the actor stars in both dramas. “Ozark’s” fourth season dropped on the streaming service on Jan. 21.

From Ozark to Inventing Anna, Julia Garner has firmly established herself as a master of accents. pic.twitter.com/JcViKaZZBl

Although Bloys would not reveal whether the upcoming season is the last, he confirmed the decision is Armstrong’s and that the creative team is still undecided as to whether there’s more. That wasn’t the show’s only driving factor though. A false report that star Jeremy Strong had been cast in an upcoming live-action remake of “Stuart Little” also surfaced, gaining plenty of traction.

‘Succession’ star Jeremy Strong has been cast as Stuart Little in the live-action remake of ‘Stuart Little’. Scheduled for release in 2024. pic.twitter.com/r9VsWnPxsa

In fifth place this week was the Netflix debut of “The Cuphead Show,” an adaptation of the popular video game that pays homage to the rubber hose animation style of early Mickey Mouse and Fleischer Studios shorts. All 12, 10-minute episodes debuted on Friday, leading to nearly 109,000 engagements on Twitter. Some took issue with the series not having a deep plot or more connectivity, while others celebrated its inherent silliness. Meanwhile, plenty of fans also shared their own art after taking in the episodes.

I feel like anyone who wanted some "deep lore" or "dark, connecting plot" with The Cuphead Show... really missed the point

The game's basically a romp through a classical land to defeat Monsters and The Devil. A fun and wacky throwback, that's what it should be and that's fine pic.twitter.com/kH0Bfy4Ydq

On the back half of this week’s trending list were the Olympics on NBC as well as the upcoming adaptation of HBO Max’s “The Last of Us,” which surged online following Bloys’ TCA-tied reveal that the show will probably debut in 2023.

In eighth place with just under 65,000 engagements was Netflix’s “Bridgerton.” The series debuted a Valentine’s Day-appropriate teaser for Season 2 that reintroduced Lady Whistledown in a voiceover set to dramatic music. The minute-long trailer also previewed some of the lusty storylines to come while confirming a March 25 debut date.

Starz’s “Outlander,” which launched ticket sales on Friday for a Season 6 premiere virtual event, and HBO Max’s “Game of Thrones” prequel “House of the Dragon,” which author George R.R. Martin confirmed has wrapped filming, rounded out this week’s Top 10.

#TargaryenThrusday BONUS Exciting news out of London — I am informed that shooting has WRAPPED for the first season of HOUSE OF THE DRAGON. https://t.co/DZ2uMICFck pic.twitter.com/05tEfHWFqj