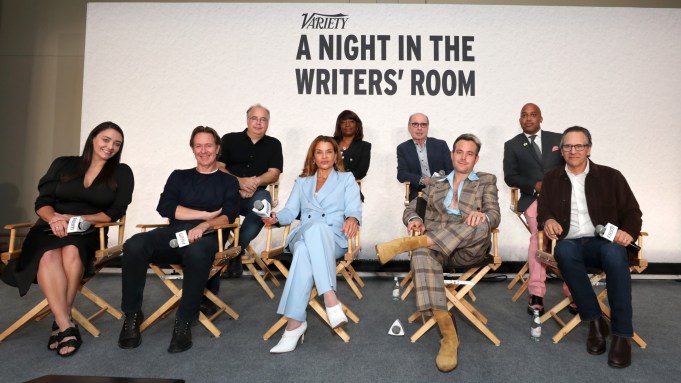 The conclusions of dramas like “Ozark” and “Better Call Saul” have ruled cultural conversation about TV in 2022, while new shows such as “Bel-Air” and “As We See It” are a sign of the innovation and creativity to come. Creators and showrunners of some of the top dramas on the small screen came together for Variety’s “A Night in the Writers’ Room” to discuss bringing new ideas to old properties, what it’s like to write a series finale and more.

Moderated by TV features editor Emily Longeretta, the event began with a conversation about what it looks like to run a writers’ room under pandemic restrictions. Each writer offered different perspectives on the pros and cons.

Chris Mundy, writer and executive producer of “Ozark” much prefers in-person writing, but he found that keeping the writing staff consistent allowed the Zoom experience to go as smoothly as possible.

“In the final season of ‘Ozark,’ we started in the room and four weeks later, the world shut down,” he said. ”We were lucky that we all knew each other; it was the exact same staff from the previous season. But it’s not conducive to what we do at all. It’s supposed to be like a fun, drunken Thanksgiving dinner [where] everyone follows each other’s lead, and it just doesn’t happen when you’re staring at a screen. I’m just in the mini room right now with only two other people and we’re in person, and it just feels like the most liberating thing in the world.”

“I hated every minute of it,” he said. “You couldn’t have a sidebar with somebody. You couldn’t overlap speaking, because the technology didn’t take it. We’d sit there with our hands raised, and by the time [series co-creator Peter Gould] gets back to you, you’d forgotten what you had in your head. We got about two weeks [in person] and then shut down, and the writers never met in person again.”

By contrast, “Bel-Air” showrunner Rasheed Newson values the flexibility the Zoom room brought to the series, especially in terms of staffing, so much so that his team has continued to write virtually for their second season.

“I like people, but I also like not having a commute,” he said. “I like using my own restroom. I like having lunch in my own kitchen. I like being able to go pick my kids up at 5 p.m. We also have writers who aren’t in L.A. and they would not be able to be part of the show [if the writers’ room was in person].”

Newson also discussed his approach to utilizing world-famous IP, as his series is a dramatic retelling of “The Fresh Prince of Bel-Air.”

“The audience was awaiting us with a lot of skepticism,” he said. “But we felt like you’ve got to take big swings. You’re damned if you do, damned if you don’t — so we might as well just do what we want.”

Max Borenstein, showrunner of “Winning Time: The Rise of the Lakers Dynasty,” echoed Newson’s sentiment and noted the added pressure of satisfying an audience while adapting a story about real people.

“It’s like if Carlton could get angry,” he joked, presumably referring to the Los Angeles Lakers that have expressed frustration with the show. “We all approached it with a great deal of fandom and love, but also an understanding we weren’t interested in just seeing the Wikipedia page. We read every day’s newspaper articles [from the Lakers’ Showtime era] about what was happening, and found a lot of tidbits that hadn’t made it into any books. It was about, ‘How can we tell a story that merits a dramatization?’”

Limited series “Dexter: New Blood” debuted as a follow-up to “Dexter,” and was developed by writer and executive producer Clyde Phillips, who also laughs about negative reception.

“We needed to redeem ourselves a bit, famously,” he said, as the finale of the original series has been oft-criticized. “We determined what the ending was going to be first. Basically, you put your nose against the ending on that wall, and then you walk backward. Figuratively, it’s ‘The Shining’ — all these doors are next to you, and behind each door is one of the episodes. We could just build it so that it would be solid.”

The first season of “Truth Be Told,” created by Nichelle Tramble Spellman, is based on Kathleen Barber’s book “Are You Sleeping,” while proceeding seasons have put the same characters in new situations.

“[Before] Season 2, I had gone to see Elizabeth Gilbert and Cheryl Strayed speak at UCLA,” she recalled. “The entire audience at UCLA was just wrapped, all these women leaning in. And I was turned in the opposite direction, looking at all the women and thinking, ‘Huh. If those two were evil, this would be a really interesting afternoon. If there was darkness on that stage, where would this go? That’s where Kate Hudson’s character came from for Season 2.”

While “The Man Who Fell to Earth” acts as a sequel to the 1976 film adaptation of the 1963 novel of the same name, creator Jenny Lumet drew much inspiration from her own family history.

Jason Katims had a similar experience creating “As We See It,” though his series is an original instead of an adaptation.

“The show is about three young adults who are on the spectrum, who are roommates in an apartment together. It’s a deeply personal story to me, because I have a son who’s on the spectrum,” he said, “who at the time that I first started thinking about writing the show, was exactly the age of the characters. He wasn’t one of the characters, it’s not autobiographical to him, but I was thinking very much about not just the television show, but what does it mean to be an adult on the spectrum? What is his life going to look like over time? I felt a deep sense of responsibility because of my son and all the people that I’ve known in that community over the years.”